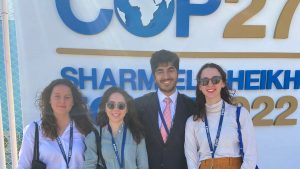 EPIC strives to build future leaders in energy and climate change, and doing so requires real-world experiences. That’s why EPIC partnered with UChicago Career Advancement to sponsor a delegation of College students to attend the COP27 international climate change conference. These exceptional rising leaders — Adera Craig (’25), Raghav Pardasani (’25), Zoe Saldinger (’23) and Elizabeth Zazycki (’23) — traveled to Sharm el-Sheikh, Egypt from November 11-13, where they had the opportunity to learn from and network with leaders in government, industry and NGOs.

Below are their on-the-ground reflections from COP27.

For our first morning in Sharm-El-Sheikh, we began our COP27 journey in an electric bus to arrive at the Green Zone. The Green Zone consisted of water bottle stations, waste segregation bins, and various forms of plastic art. This was accompanied by picturesque mushrooms, a box with a forested background, in sharp contrast to the sandy landscape of Egypt, and a lot more.

We had a busy first day in which I attended seven sessions. The first was titled “Top technologies addressing climate change.” It was hosted by the CivicTech Alliance, a global network across 17 countries that aims to address solutions to some of the world’s problems through technology and innovation. The session highlighted the critical synergy between entrepreneurship, technology, and policy and further exposed me to technologies spread across a wide range of sectors such as transportation, finance and waste management. For example, New-Zealand based company CiRCLR, which brands itself “the tinder for trash,” reveals the value of an organization’s waste by matching it with other businesses who want its waste on CiRCLR’s B2B platform.

Another company that piqued my interest was Klimate.Co, which developed an infrastructure platform to scale the carbon removal industry. Through EPIC’s talk about climate-tech investing with Energy Foundry, I gained an understanding of how different forms of carbon removal technologies are either underdeveloped or too expensive. Klimate.Co works around the problem through a recommendation-based algorithm to develop a carbon removal budget and planner for companies.

I also attended “Innovative partnerships for development and scalability of energy infrastructure,” which focused on renewable energy electrification through a case study of the 27 MW Betmai Hydroelectric project in Sierra Leone. A local indigenous project developed by Sewa Energy Resources Ltd. (SERL), it promises to deliver affordable energy to roughly 500,000 households. The CEO of SERL, Kofie Macauley, emphasized that energy security stems not only from rural electrification but the accompanying economic benefits derived from it: irrigation, attraction of companies (such as smelting plants) to the region, and so much more. However, does electrification always lead to positive development effects in Africa? Logically, the answer leans towards a strong yes. However, at EPIC’s event with Prof. Burlig, Prof. Burlig informed me that rural electrification in small villages in India reduced welfare. Electrification had positive welfare effects only for larger villages, perhaps benefitting from economies of scale. Given that the Betmai project would provide electricity for a quarter of Sierra Leone, I hypothesize that the electrification would indeed have positive economic effects with the expansion of energy-enabling activities infrastructure.

I was super excited to visit COP as I worked this summer at the Climate Hub at the US Treasury Department and helped my boss prepare for the conference! The conference has certainly not disappointed so far, as it has allowed me to dig deeper into my interests into the social and economic effects of climate change as well as energy transitions.

On Day 2 of the conference, we were busy attending a full schedule of talks. One of my favorite events this day, “Farmers as soil carbon stewards,” was on a topic I knew virtually nothing about going into it. This talk was particularly exciting because it built on the actions taken at COP21 in Paris, which was the 4 per 1000 Initiative–a plan to capture 0.4% of carbon from the atmosphere and store it within the soil, meant to demonstrate that soil can be part of the solution and not just part of the problem because of food insecurity. We learned that now more than 700 NGOs and governments are a part of the plan.

I also learned a lot from the event, “Bridging access to climate action with stronger carbon markets.” This talk was about voluntary carbon markets, and included scientists, members of capital markets, and purchasers of carbon credits like Microsoft. We learned that the two main problems for voluntary carbon markets are trusts and a mechanism of purchase. First, for trust in purchasing carbon credits, there needs to be trust that there is additionality, that the purchases can be secure in quality, and there is real need for the funds to prevent carbon from being released into the atmosphere. There are also questions about the mechanism used to purchase carbon credits. Are middlemen such as banks necessary, and who is selling the credit and therefore getting the benefit? This raises questions of carbon colonialism. While I worked on voluntary carbon markets previously, it was interesting to hear different stakeholder perspectives and the audience questions were really informative as well.

Overall, I think we’re getting a really interesting view of COP and international climate action from being in the Green Zone and the Climate Action Zone where we have had the opportunity to learn about energy transitions, natural capital, and agriculture from soil to seeds. Another interesting component has been meeting people that attend and participate in events outside the blue zone, where, for example, some speakers have felt more free to radically critique systems when the audiences are smaller. Another component of COP that isn’t often talked about is the Tent Halls that include stalls from governments, local and international businesses, as well as small artisans. I was able to spend some time at the Government of Egypt’s cultural stalls and bought handmade embroideries made by women artisans in Akhmim, where the proceeds help support their families. This has really enriched my experience.

I was most excited for the second day at COP because of the theme: Agriculture and Adaptation. Agriculture policy has always been an interest of mine because of my proximity to farms growing up in California and its encompassing, yet scarcely perceived, impact on the climate crisis. Last year, I was able to take a course on industrial farming that delved into modern day corporate agriculture as well as the history of agriculture in the Midwest, so I was skeptical regarding how the conference would approach the topic considering how policies and practices vary greatly depending on geographic and demographic regions. During the second day, I attended a panel about utilizing soil for carbon storage that proved particularly engaging because it featured a variety of stakeholders and demonstrated actual progress made with the “4 per Thousand” initiative that was launched at COP21 in Paris in 2015. Afterwards I had the privilege of talking to one of the panelists: Patrick Holden, Chief Executive of the Sustainable Food Trust and farmer in the U.K.. Along with comparing farming in the Midwest to practices on his own farm in west Wales, we discussed the role of education and community engagement with sustainable agriculture and how this poses a specific challenge in the U.S. because of our heavy reliance on industrial farming rather than on more traditional, small farms.

Later in the day, I attended another talk regarding seed agency, ecologically conscious farming, and the challenges of the new U.S. agriculture plan that was released yesterday at COP27. I was able to speak with Debbie Barker, the international coordinator at the International Coalition on Climate and Agriculture, and similar themes regarding domestic agriculture emerged in our conversation, especially concerning the role of education and access in the agriculture community. In addition to the other talks I attended throughout the day, these one-on-one discussions reminded me about the need for local engagement, a strong theme throughout COP27. Despite our school’s location in the Midwest, agriculture is not a common discussion topic and after learning about movements domestically and internationally, I am eager to see how we can incorporate agriculture into the EPIC energy and climate club and in a broader sense on campus.

Today was a rest day so we had the opportunity to explore more of Sharm el-Sheikh. After touring the Mosque and old city, we headed back to the hotel to snorkel and discuss our overall experience. By chance, we started talking to a group of COP27 delegates from the Congo who run an organization called “ONG Eveil D’Afrique.” There was an initial language barrier due to difficulties with English, but I realized they spoke French which I was really excited about because I haven’t had many opportunities to speak with other French speakers in Chicago. We discussed their work on rainforest conservancy, solar panel installation, and energy transitions in local villages. We then exchanged contact information for future partnerships and collaborations. I thought the fact that we happened to bump into a group of passionate environmentalists on the way back from the beach was so cool. This kind of chance encounter with a foreign sustainability group would have been far rarer in Chicago and having the opportunity to not only attend panels, but network with like-minded individuals really enriched our overall experience.