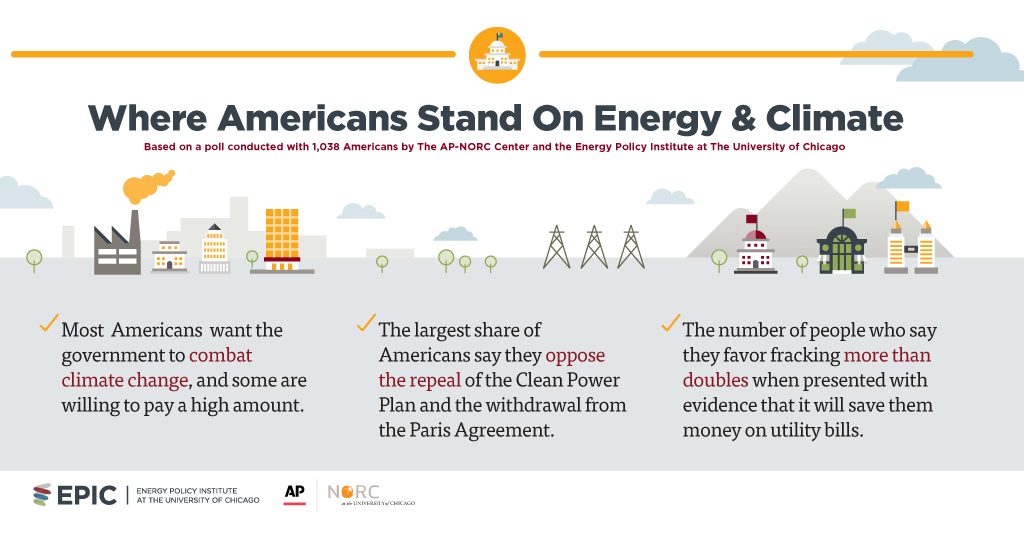 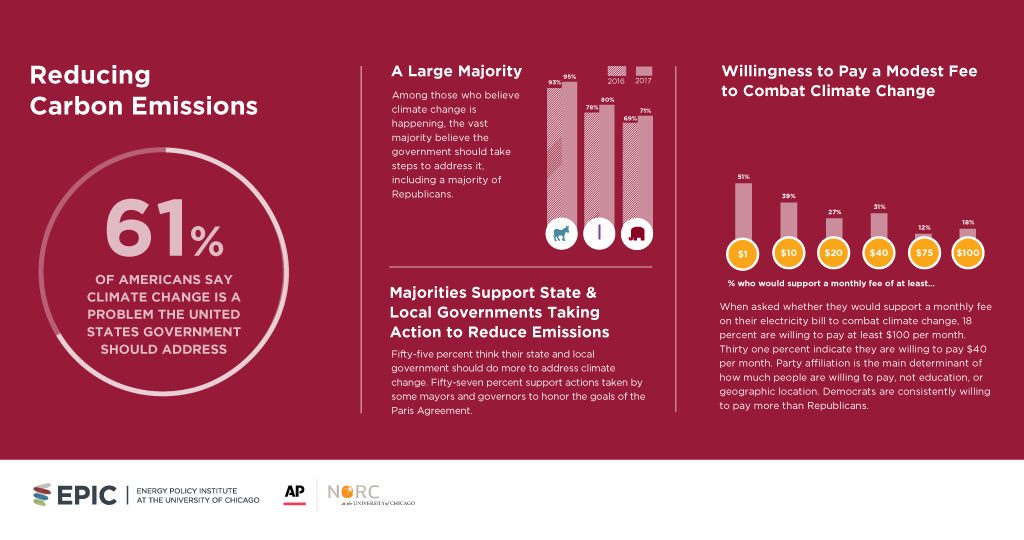 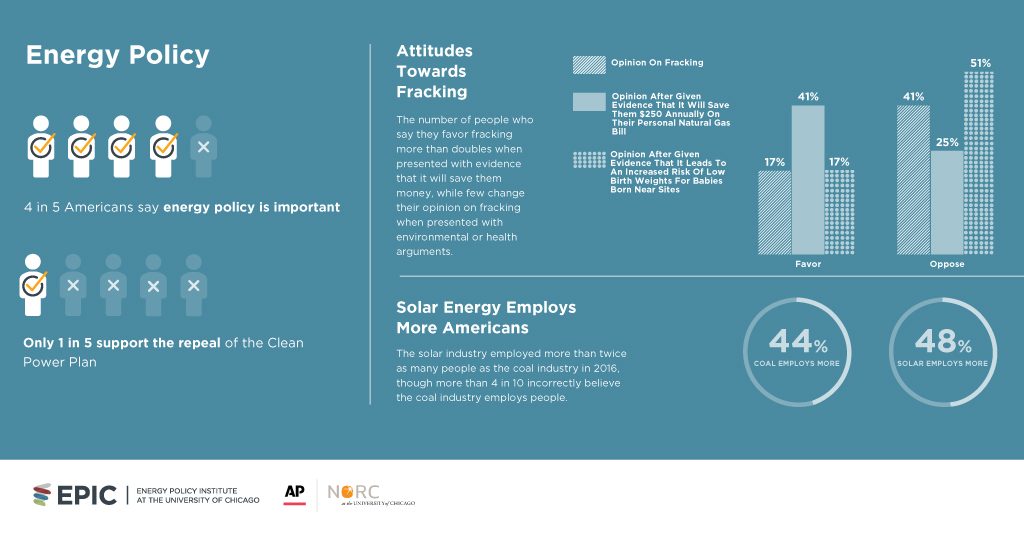 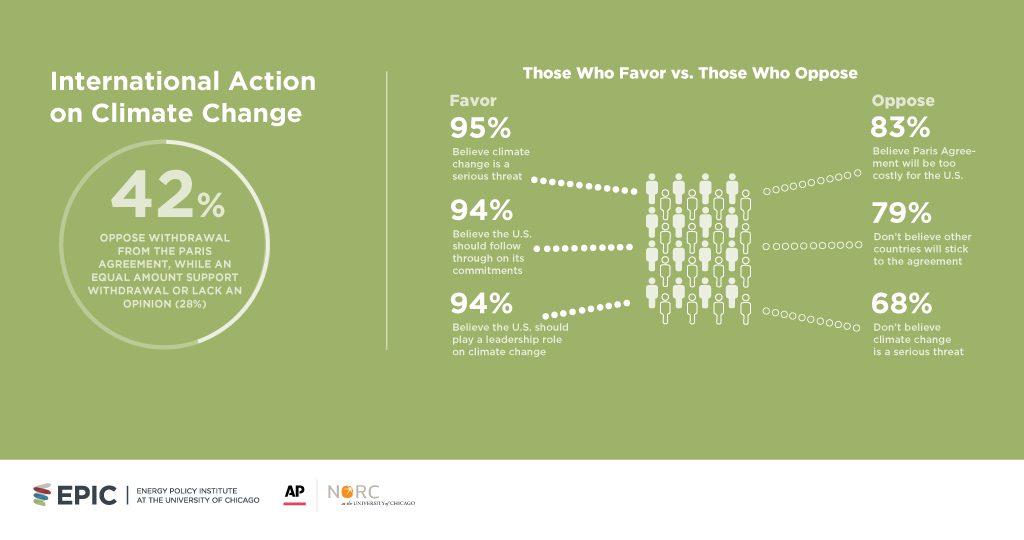 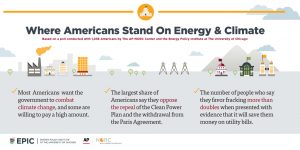 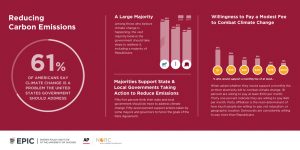 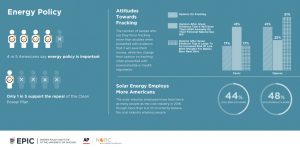 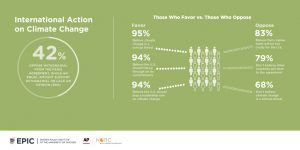 Sixty-one percent of Americans think climate change is a problem that the government needs to address, including 43 percent of Republicans and 80 percent of Democrats, according to a new survey from the Energy Policy Institute at the University of Chicago (EPIC) and The Associated Press-NORC Center for Public Affairs Research.

Those numbers are even higher when only those who believe in climate change are asked. Seven in 10 Republicans and nearly all Democrats who believe climate change is happening think the government needs to take action. When asked about key climate policy decisions, the largest shares of Americans say they oppose the repeal of the Clean Power Plan and the withdrawal from the Paris climate agreement.

While many Americans favor policies that would help the country lower emissions, questions on how much they would personally be willing to pay to confront climate change (in the form of a monthly fee on their electric bill) reveal great disparity. While half are unwilling to pay even one dollar, 18 percent are willing to pay at least $100 per month.

“These results put the polarized climate debate in sharp relief, but also point to the possibility of a path forward,” said Michael Greenstone, director of EPIC and the Milton Friedman Professor in Economics, the College, and the Harris School at the University of Chicago. “Although half of households said they were unwilling to pay anything for a carbon policy in their monthly electricity bills, on average Americans would pay about $30 per month, as a meaningful share of households report that they are willing to pay a substantial amount. What is particularly striking is that it’s projected to cost less than $30 per person to pay for climate damages from the electricity sector. So, while the raw economics appears to be less and less of a problem, the open question is whether it is feasible to devise a robust climate policy that accommodates these very divergent viewpoints.”

“Public opinion around many energy issues tends to be fluid, with people often defaulting to partisan starting points. But this survey shows an opportunity for consensus building through discussion and debate,” said Trevor Tompson, director of The AP-NORC Center. “Majorities of both Democrats and Republicans agree that climate change is happening, and there are signs that consensus could happen on other issues, too.”

About the Survey
This survey was conducted by The Associated Press-NORC Center for Public Affairs Research and with funding from EPIC. Data were collected using AmeriSpeak Omnibus®. The survey was part of a larger study that included questions about other topics not included in this report. Interviews for this survey were conducted between Aug. 17 and 21, 2017, with adults age 18 and over representing the 50 states and the District of Columbia. Panel members were randomly drawn from AmeriSpeak, and 1,038 completed the survey by web or phone, depending on respondent preference. The overall margin of sampling error is +/- 4.1 percentage points at the 95 percent confidence level, including the design effect. The margin of sampling error may be higher for subgroups.

AP-NORC/EPIC poll: Majority in US concerned about climate