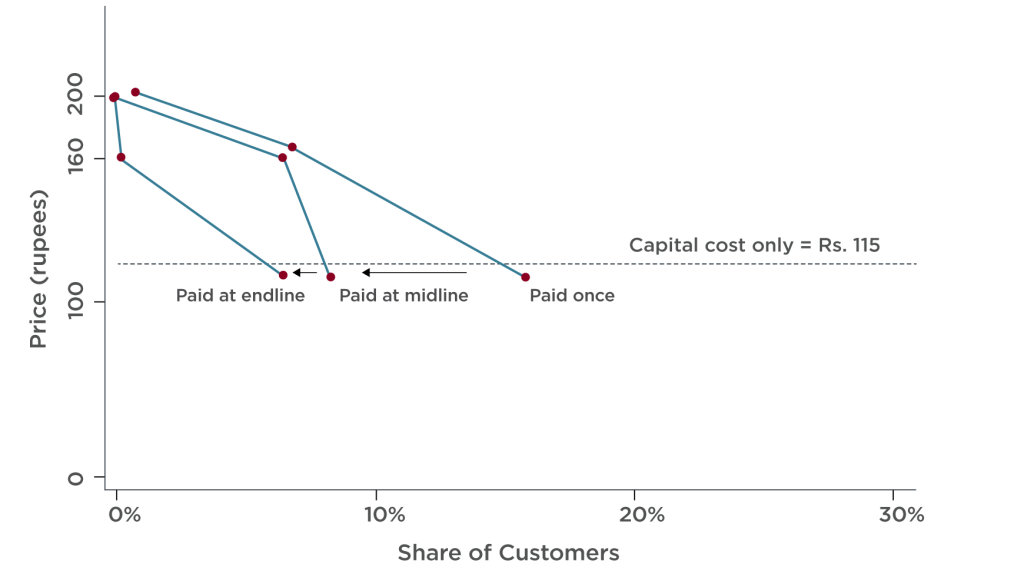 In a world where over 800 million people continue to live without electricity from the grid, decentralized solar power has held out the promise of solving the global electricity access problem, and doing so through a clean energy source. As rapid innovations in solar energy continue to cut the price of photovoltaic panels, the excitement around distributed solar has only grown. And yet even as technocrats, engineers, and venture capitalists have increasingly invested time and money into  developing small solar grids, each serving a handful of villages or households, a a few fundamental questions have all too frequently gone unanswered:

EPIC Director Michael Greenstone, South Asia Director Anant Sudarshan, and their colleagues studied this question over four years in India’s state of Bihar. They partnered with an Ashden Award winning startup – Husk Power Systems – boasting a team with a lengthy experience of providing electricity to poor rural households through alternative energy technologies. Their experiment took shape during a time when the state increased electrification from the grid by over 40 percent. In 2013, when their study began, Bihar’s electrification rate was below that in sub-Saharan Africa with just a quarter of households in the study having any form of electricity at all, largely from micro-grids based on diesel generators. By the end of the experiment in 2017 about 40 percent of homes had electricity, over half of them connected to the grid.

Solar micro-grids proved relatively unpopular. At unsubsidized prices the researchers found that even in the absence of grid connections, demand for the microgrids was nearly zero. As part of the experiment, the researchers provided a subsidy to households to bring the price of the microgrids down to INR 100 ($1.39) per month, below the cost of the system. With the subsidy, demand leapt by 17 percent. Yet adopting households proved unreliable consumers, and over time ceased to pay for power from the micro-grid, until only 7 percent of homes remained connected by the end of the study.

Why did this happen? In a word, competition. At the start of the experiment, micro-grids struggled to compete with an oft-ignored privately supplied option, namely microgrids based on dirty diesel generators. By the end of the study, diesel had nearly disappeared as an energy source but households chose either individual solar panels or connected to the grid. Richer households were overwhelmingly more likely to choose to connect to the electricity grid, even given unreliable and low-quality supply.

This research paints a much more nuanced picture of decentralized solar than is commonly acknowledged. Our evidence suggests that solar is best viewed as a transition or fall-back technology, most valuable to households when the grid is unavailable or very expensive. As people grow richer or as the grid becomes more available or affordable, that is easily the preferred option, not decentralized solar power. And even among those who do buy solar, standalone home solar systems are much more popular than the micro-grid, suggesting that investing in the quality, affordability, and availability of the former has high value.

The rich data collected by the researchers provides an unprecedented opportunity to formally model household choices over several energy options. Poor consumers proved incredibly sensitive to price, a finding that helps to rationalize the government’s decision to supply very cheap grid power, even where this results in low quality supply. Although this choice costs money, it increases the number of homes who have some form of electricity. Eventually many governments might need  to raise prices, and if they do, the presence of cheap solar as an alternative will significantly determine whether households lose access entirely, or switch to the decentralized option.