Everything came full circle for Elizabeth Zazycki, a fourth-year student in the College.

During her summer 2022 internship with the U.S. Department of the Treasury’s Climate Hub, Zazycki had helped her supervisor prepare for the 27th Conference of the Parties of the United Nations Framework Convention on Climate Change, known as COP27. A history and political science major pursuing a career in climate diplomacy, Zazycki had planned to follow the conference at home from her laptop.

Little did she know that a few months later, she would find herself on a plane to Sharm El-Sheikh, Egypt, to attend the conference with peers from the University of Chicago.

“It was amazing to see COP27 in person,” Zazycki said. “Since I want to work in climate diplomacy, COP is one of the most important moments each year for my chosen career path.”

Zazycki is one of four UChicago students from the undergraduate College who received the opportunity to attend COP27. With support and funding from the University, the students spent three days from Nov. 11-13 networking and exploring climate solutions with leaders in government, industry, and NGOs.

The trip was a joint partnership between the University’s Office of Career Advancement and the Energy Policy Institute at the University of Chicago (EPIC).

197 nations come together
In 1992, more than 150 countries adopted the United Nations Framework Convention on Climate Change and signed a treaty committing themselves to “the stabilization of greenhouse gas concentrations in the atmosphere at a level that would prevent dangerous anthropogenic interference with the climate system.”

Since 1995, the signatories, which today include 197 countries and the European Union, have met annually at a Conference of the Parties to assess progress and discuss policies to limit and mitigate the impacts of climate change.

This year’s conference in Egypt drew more than 90 heads of state, including U.S. President Joe Biden.

Learning from experts and peers
The conference offered sessions on a diverse range of topics, including green finance, transit decarbonization, climate-smart agriculture and water reclamation. Students had the opportunity to choose the sessions that best aligned with their career interests.

Raghav Pardasani, a second-year student majoring in economics and environmental and urban studies, found himself particularly drawn to the sessions on climate technology and infrastructure.

“We had a busy first day in which I attended seven sessions,” Pardasani said. “The first was titled ‘Top Technologies Addressing Climate Change.’ The session highlighted the critical synergy between entrepreneurship, technology and policy and further exposed me to technologies spread across a wide range of sectors such as transportation, finance and waste management.”

“This talk was about voluntary carbon markets, and included scientists, members of capital markets and purchasers of carbon credits like Microsoft,” Zazycki said. “While I worked on voluntary carbon markets previously, it was interesting to hear different stakeholder perspectives, and the audience questions were really informative as well.”

“I was most excited for the second day at COP because of the theme: ‘Agriculture and Adaptation,’” said Craig. “I attended a panel about utilizing soil for carbon storage that proved particularly engaging because it featured a variety of stakeholders and demonstrated actual progress made with the ‘4 per Thousand’ initiative that was launched at COP21 in Paris in 2015.”

Outside the sessions, Zoë Saldinger, a fourth-year student majoring in public policy and environmental and urban studies, capitalized on the opportunity to network with people from around the world.

“By chance, we started talking to a group of COP27 delegates from the Congo,” Saldinger recalled. “We discussed their work on rainforest conservancy, solar panel installation and energy transitions in local villages. We then exchanged contact information for future partnerships and collaborations.

“I thought the fact that we happened to bump into a group of passionate environmentalists on the way back from the beach was so cool. Having the opportunity to not only attend panels, but network with like-minded individuals really enriched our overall experience.”

Empowering the next generation of climate and energy leaders
The COP27 trip is one of many opportunities offered by UChicago Climate and Energy Careers, a preprofessional program that prepares students to launch successful careers in renewable energy, climate policy and more.

Working closely with experts at EPIC and other leading research institutes at the University, UChicago Climate and Energy Careers provides experiential learning opportunities that spur students to use what they learn in the classroom to tackle climate change and power a 21st century economy.

These opportunities include internships with public and private sector organizations, a climate policy competition, and specialized program tracks focused on subfields such as clean technology and green data. A diverse range of climate and energy employers have hired UChicago students for internships and full-time roles, including NOAA, the National Renewable Energy Laboratory and the Smithsonian Environmental Research Center.

Building on the momentum from the COP27 trip, UChicago Climate and Energy Careers will offer a series of career “treks” later this year in which students will travel to meet employers in major climate and energy hubs. These will include a decarbonization and renewable energy trek to Houston, a climate policy trek to Capitol Hill in Washington, D.C. and a special trek to New Delhi, India, offered in partnership with EPIC. 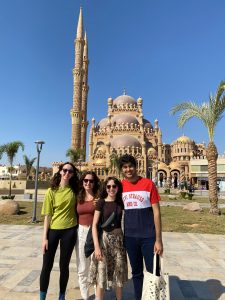 Starting this year, students also have an exciting new opportunity to explore climate and energy outside of the classroom. EPIC has partnered with students to start an Energy & Climate Club, which COP participants Pardasani and Craig are working to make into a Registered Student Organization. To seed the club’s future, EPIC and the students formed a new speaker series that connects students with climate and energy experts and like-minded peers.

Now that they’re back in Chicago, the COP27 students are excited to take advantage of these opportunities and get involved with the climate and energy community on campus and beyond.

“COP27 has emphasized that the climate challenges we face are local problems just as much as they are global problems,” said Craig. “Although international collaboration is essential, we’ve been able to connect with individuals across the world who are making the greatest impact by focusing on what they know best: their own community. I’m very eager to bring back these concepts and ideas to campus and the greater Chicago area.”

By Dan Moore via University of Chicago College News