The French word for a wind turbine is “éolienne”, from Aeolus, the mythological keeper of the winds in Homer’s Odyssey, who first tries to help and then turns against Odysseus. The word was coined by Ernest Sylvain Bollée, a French inventor who designed an innovative wind turbine, patented in 1868. The turbines used wind energy to pump water rather than to generate electricity — the first person to do that was James Blyth in Scotland in 1887 — but they still fascinate enthusiasts for the history of technology.

It is appropriate, then, that France is still in the vanguard of innovation in wind power. General Electric’s offshore wind joint venture with Alstom is developing a huge new turbine, the world’s tallest, which will be built at plants in St Nazaire and Cherbourg on France’s Atlantic coast. It is an important product for GE, which needs to develop other sources of earnings with its traditional gas-fired power generation business in decline. Forecasts from its rival Siemens of the outlook for worldwide sales of large gas turbines make a grim picture for the companies that make them.

In the US, offshore wind development has lagged well behind Europe, partly because of those cost concerns and partly because of some stiff opposition from coastal property owners. If you have the wide open spaces of Texas, Oklahoma and Iowa available for onshore wind development, there is anyway less need to head out to sea. Offshore wind in the US is starting to pick up, however, particularly for the more crowded northeast of the country. A report this week from Environment America, titled Wind power to spare: The enormous energy potential of Atlantic offshore wind, argued that turbines off the US Atlantic coast could produce enough electricity to supply the needs of the coastal states four times over.

Meanwhile, another use of US offshore resources is attracting only limited interest. The latest auction of drilling rights in the Gulf of Mexico, the largest ever in terms of the area offered, had been hyped up by the interior secretary Ryan Zinke as a “bellwether” for US offshore producers, although industry groups had attempted to play down those expectations. When the auction was held on Wednesday, their caution was vindicated. The sale was not a complete flop, but its results showed only a modest level of enthusiasm for new acreage. Of 14,474 lease tracts available, bids were received on just 148. When oil companies are thinking about where to deploy their investment dollars, the Gulf of Mexico or any other region has to make a very compelling case to seem competitive against onshore shale reserves. The Sierra Club declared the offshore lease sale a “massive dud”. Oil output from the Gulf of Mexico has grown strongly in recent years, and the US administration expects that to continue into the early 2020s, but to level off after that. Sam Ori of the Energy Policy Institute at the University of Chicago produced this nice chart showing how bidding for Gulf of Mexico leases has varied with the oil price in recent years. 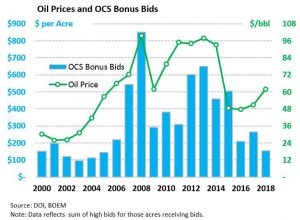