Carbon taxes, which are levied on the carbon emissions required to produce goods and services, are considered an optimal solution to combat climate change because they help bridge the gap between the private and social costs of carbon. Is one company or industry producing an inordinate amount of carbon? Tax them at a rate to bring their carbon emissions—and the aggregate emissions of the country—in line with global goals.

And therein lies the rub. How do you get countries around the world to agree on a global carbon tax plan? How do you prevent companies from moving to countries with no carbon tax? And, if you cannot get all countries (or at least the biggest polluters) to agree on a carbon tax, does it even make sense for countries to go it alone? 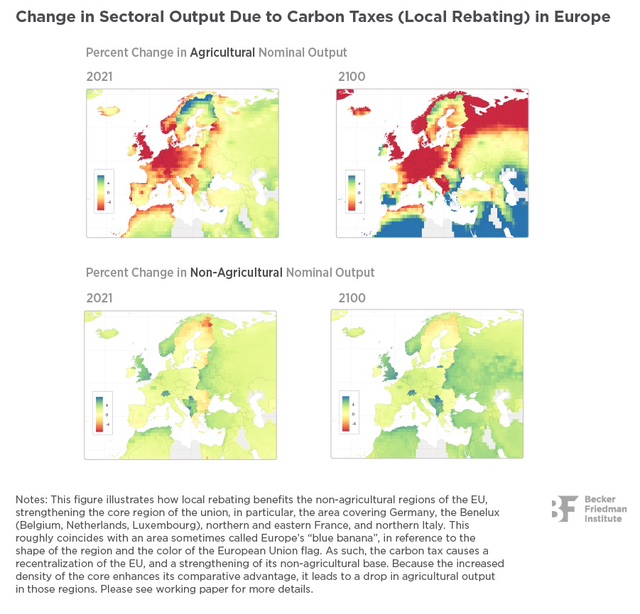 According to conventional wisdom, the answer to that last question is No. However, this new research argues that this reasoning is incomplete and misleading because it ignores how unilateral carbon taxes (or those issued by one country or group of countries) interact with the forces that shape the economic geography of the world. The authors show that the spatial response (or that within and among countries) to a unilateral carbon tax can lead to a local expansion of the region introducing the tax, and to global welfare gains.

Before describing the authors’ findings, a very brief note about their model (please see the working paper for more details), which features a realistic world economy divided into more than 17,000 locations. In this world, a carbon tax that mitigates global warming also affects the geography of absolute and comparative advantage because sectors differ in their energy intensity (non-agriculture emits more carbon than agriculture). Also, people in this world have the possibility to move. Migration and trade patterns adjust to carbon tax rebates, which benefits locations specialized in sectors with a higher effective carbon tax.

The authors’ quantitative policy analysis focuses mainly on the European Union (EU), which has plans for a region-wide carbon tax, though they show very similar results for a carbon tax introduced by the US. The authors’ analysis offers the following predictions:

A hypothetical uniform carbon tax of 40 US$ per ton of CO2 introduced by the EU and rebated locally can increase the size of the EU economy by further concentrating economic activity in its high-productivity non-agricultural core, and by attracting more immigrants to Europe.
This, in turn, leads to a more efficient global distribution of population, so that world welfare improves.
What explains this result? The answer lies in how a carbon tax acts to shift economic activity across space. This may seem counterintuitive. Readers might expect an EU carbon tax to weaken Europe’s comparative advantage in non-agriculture. Indeed, the higher energy intensity of non-agriculture implies costs are pushed up more by a carbon tax, leading to a relative drop in nonagricultural output. If carbon tax revenue were lost, this would be the case: The EU would shrink, and global welfare would decline.

However, when carbon tax revenue is locally rebated, the results are reversed. The higher relative tax burden in non-agriculture is only partly passed on to wages, so once local rebating is added, regions specializing in non-agriculture experience a relative gain in income. The authors formally prove how the introduction of a carbon tax in a single location can generate a positive income effect on its economy. Importantly, this tax must be relatively moderate; if too high, these benefits are lost due to standard distortionary effects. In the case of the EU, this income effect generates migration from agricultural to non-agricultural regions, causing non-agricultural output to increase relative to agricultural output. This effect is further amplified because businesses tend to cluster close to each other and in high population areas, a phenomenon known as agglomeration forces.

A sort of positive feedback loop develops. As Europe’s non-agricultural core grows, the EU attracts more immigrants, and its economy becomes larger. And although real income per capita in the EU drops, the reallocation of population and economic activity from less productive areas of the world improves global efficiency and welfare. This suggests that in the absence of a carbon tax there is too little geographic concentration in the EU core and there are too few people in Europe. As such, an EU carbon tax with local rebating acts as a place-based policy that subsidizes Europe’s non-agricultural core and attracts more people to move to the European Union. This point bears stressing:

Not only does a unilateral EU carbon tax lower global carbon emission, thus mitigating planet warming, it also increases Europe’s weight in the world economy while improving global welfare and efficiency.
If a unilateral carbon tax is introduced by the United States (US), instead of by the EU, the global welfare gains are similar.

Bottom Line: For policymakers, this research reveals that a modest unilateral carbon tax can be globally welfare-improving while also expanding a local economy. Local rebating subsidizes highly productive non-agricultural regions and incentivizes people to move to these regions in the EU or the US. With more people living in the developed world, global efficiency and global welfare improve, while planet warming ebbs.

via Becker Friedman Institute for Economics at the University of Chicago