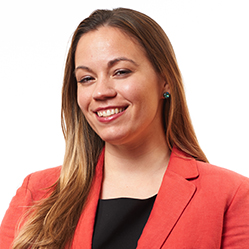 As the Air Quality Life Index (AQLI) strengthens its commitment to bringing localized information on air pollution’s health impacts to every corner of the globe, Christa Hasenkopf joins with a deep background in air quality data transparency and community building. Hasenkopf comes to her new role as director of the AQLI and of air quality programs at the Energy Policy Institute at the University of Chicago (EPIC) after having co-founded and led OpenAQ, a non-profit organization empowering communities around the globe to clean their air by harmonizing, sharing, and using open air quality data. Under her leadership, the non-profit grew to become the world’s largest open repository of open air quality data, currently serving 19 billion air quality data points from 155 countries and convening a community of air inequality-fighting individuals around the world.

“We are beyond thrilled to have Christa join our team,” says AQLI founder Michael Greenstone, the Milton Friedman Distinguished Service Professor in Economics and director of EPIC. “Christa is an absolute leader in articulating the importance of air quality for human health and how data can help. I’m thrilled that we will have the opportunity to work together helping governments and people use the AQLI to make more informed choices. This information is critical as the world contends with the scourge of air pollution that causes the average person on the planet’s life to be shortened by 2.2 years.”

Hasenkopf fell in love with open data as a mechanism for change in 2011, after launching an open air quality data effort in Ulaanbaatar, Mongolia. Previously, Hasenkopf was the first Chief Air Pollution Advisor to the Medical Director at the State Department. In this position, she chaired a task force created to protect U.S. government employees and their families from the effects of air pollution in locations across the world. She also played a key role in defining health messaging around real-time air quality data collected and publicly shared at posts overseas through a joint U.S. EPA-Department of State effort. Additionally, Hasenkopf served in multiple positions at the U.S. Agency for International Development (USAID), including as the air quality lead for the agency and as a science fellow.

Hasenkopf designed and teaches an Air Quality Management & Policy masters’ course at Johns Hopkins. She is a former Fulbright Fellow who received a PhD in Atmospheric & Oceanic Sciences from the University of Colorado and a BS in Astronomy & Astrophysics from The Pennsylvania State University.

“Air pollution remains one of the largest, but most tractable, public health problems the world faces,” says Hasenkopf. “Yet, the problem still flies under the radar. By conveying the impact of air pollution on a human life, the AQLI has had an outsized influence in shining a light on the true cost we pay for air pollution. I’m thrilled to help continue and expand that impact through making relevant air pollution information available to the public and decision-makers.”

Since its launch, the AQLI has been used by people in every country globally. Fully available in three languages—English, Mandarin, and Hindi—and with country-specific analyses of top polluters available in five languages, the AQLI is having an impact around the world. The AQLI has been used in briefings with senior government leaders in China, India, Indonesia, Pakistan, and South Korea. In 2019 and 2020, Indian Members of Parliament repeatedly used the AQLI to justify changes to the Indian Air Act, forming a clean air coalition at an AQLI awareness event. And, AQLI data has been used to justify a landmark court ruling in Indonesia that found Jakarta’s government needed to do more to protect its people.

International organizations and their leaders have used the Index to support calls for improvements in air quality, including the World Health Organization, World Bank, UN Environment Programme and World Economic Forum. Environmentalists Greta Thunberg and Leonardo DiCaprio have supported the work. The AQLI’s extensive media coverage has included a custom data visualization in The Washington Post, print and video coverage in The Economist, an exclusive segment on PRI’s The World, and coverage from every major wire service around the globe. The late-night talk and satirical news television program The Daily Show featured data from the Air Quality Life Index (AQLI) by way of a CNN broadcast on India’s pollution. Additionally, top local news outlets in the world’s most polluted countries have extensively covered the AQLI, opening the eyes of millions to the impact pollution is having on their life expectancy.

Recognizing the effect that the AQLI has already had, and its potential to do more, Fast Company named the AQLI as a finalist for its 2019 World Changing Ideas Award. This major annual award elevates brave concepts and innovative solutions that make the world better based on their potential for impact.

One in Six Killed by Pollution Worldwide, Study Finds

Enough About Climate Change. Air Pollution Is Killing Us Now.

EXPLAINER: How China Got Blue Skies in Time for Olympics