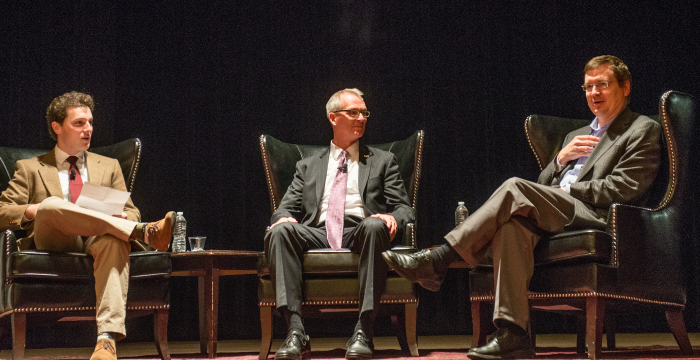 Through elaborate and deceitful public relation campaigns, big tobacco companies once cast doubt on the harmfulness of smoking. The documentary Merchants of Doubt portrays climate skeptics using the same deceptive techniques – and even the same cast of spin doctors. EPIC sponsored a screening of the film, directed by award-winning filmmaker Robert Kenner of Food, Inc. and Two Days in October, for University of Chicago students, faculty and friends on November 16th at the International House.

The film was followed by a panel discussion that included former South Carolina Congressman Bob Inglis. Inglis is a Republican who now works tirelessly to promote action on climate change. As part of that effort, he launched the Energy and Enterprise Initiative at George Mason University in 2012. He is featured in the movie as an important actor in reaching out to Republicans to persuade them that a carbon price is needed to confront the hidden costs of climate change.

Joining Inglis in the panel discussion, moderated by Chicago Harris Professor Steve Cicala, was legal expert and Chicago Law professor Mark Templeton. Templeton spoke about the ongoing Exxon Mobile legal suit. The company is being investigated by the New York attorney general over whether for decades the company poured money into outside groups dedicated to undermining the scientific case for climate change, even as Exxon’s own scientists warned executives. The example mirrors the deceit portrayed in Merchants of Doubt. Templeton noted that there are similarities between this case and the case brought against Big Tobacco.

In the session, Inglis also spoke directly to students, urging them to be positive influences on any climate skeptics in their families, arguing that they have the power to reach their relatives and remind them of the costs of climate change. When asked by a student how close Americans are to a tipping point and having the Department of Defense, a traditionally conservative part of the government, coming around to climate change, Inglis suggested that a conservative White House will more likely get more accomplished on the issue than a liberal one, as it would lead to a stronger Pentagon.

Inglis also discussed current presidential elections. “Nobody should be running for president and laughing about climate change,” he said, adding that the race is coming along nicely compared to what it could have been. He also emphasized the changes he is seeing amongst Republicans. In 2010, it was necessary to repeat the antagonist and atheistic beliefs that conservatives do not believe in climate change, otherwise those party relations were questioned. But now, things are slowly starting to change, though “we’re not there yet, but things are happening,” Inglis reassured his audience.