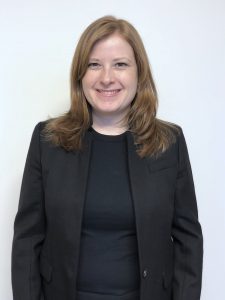 The Energy Policy Institute at the University of Chicago (EPIC) is proud to welcome Lindsay Iversen to its leadership team where she will serve as deputy director. Iversen comes to EPIC after seven years at the Council on Foreign Relations (CFR), a prominent nonpartisan think tank. There, she served as the associate director for CFR’s initiatives on climate change, food security and water security. She was previously the special assistant for research to CFR President Richard Haass.

“Lindsay brings to EPIC extensive hands-on experience building up and managing the day-to-day operations of what was a new initiative at one of America’s leading foreign policy think tanks,” says EPIC Director Michael Greenstone, the Milton Friedman Professor in Economics, the College and the Harris School. “She has considerable insight into the global energy challenge and experience working with high-level experts in this field. We’re fortunate to have someone with her invaluable experience join our team.”

Serving with EPIC Executive Director Sam Ori, Iversen adds increased capacity and expanded insight to the Institute as it broadens its efforts in the energy, climate and environment arenas.

“I’m excited to contribute to an institute that is one of the leaders in translating high-quality research into policy-relevant outcomes,” says Iversen. “Of all the foreign policy challenges our world faces today, none is more imperative to confront than the global energy challenge. The University of Chicago’s academic credibility and analytical capacity, coupled with its genuine commitment to bringing insights out of the ivory tower, make it a uniquely powerful place to work on these issues. I look forward to working closely with the faculty and researchers here to advance this crucial effort.”

During her time at the Council on Foreign Relations, Iversen worked with scholars there to build and manage CFR’s program on climate change, food security and water security. Prior to her role as associate director for the climate and resources program, Iversen worked directly with the Council’s president, Richard Haass. In this role, she was the lead researcher on Haass’s 2013 book, “Foreign Policy Begins at Home,” and a member of a small team leading peace negotiations in Northern Ireland.

Haass, the former director of Policy Planning at the State Department, says of Iversen, “Lindsay’s work with me on the Northern Ireland peace process demonstrated her capabilities in understanding complicated matters and coming up with creative policy solutions, skills she applied to her later work here tackling issues of resources and climate change in our Studies Program. EPIC is a natural next step for someone with her background and talents.”

Iversen has Chicago roots, and spent some time as a consultant at the Chicago Council on Global Affairs following several years working abroad. She earned her BA at Sarah Lawrence College and an MSc in Development Studies at the London School of Economics.