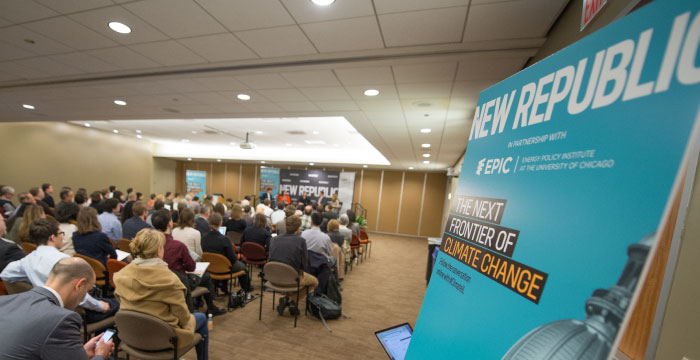 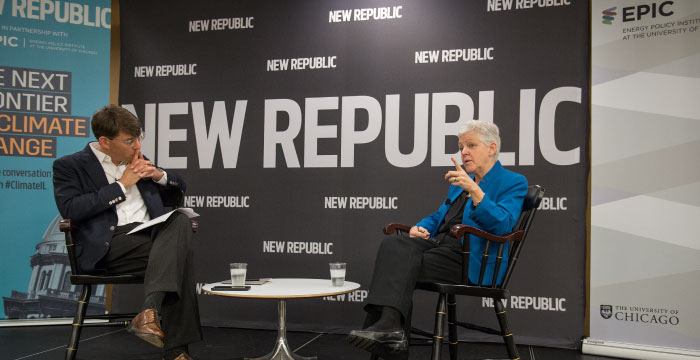 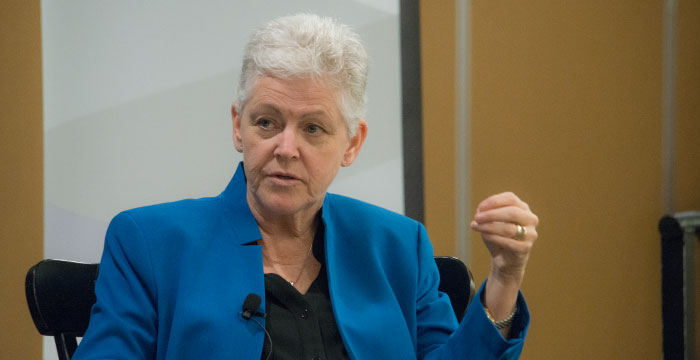 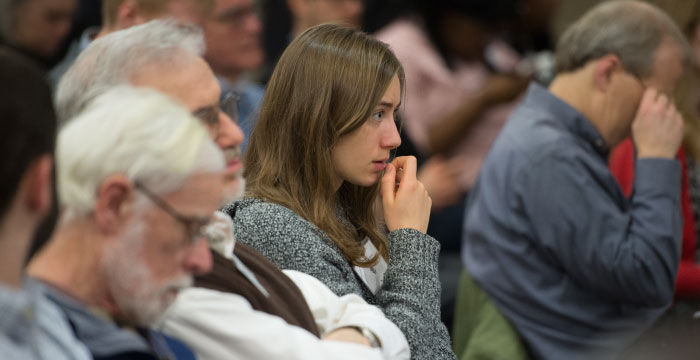 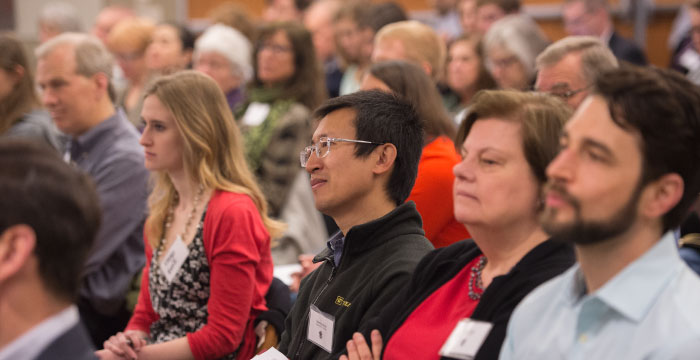 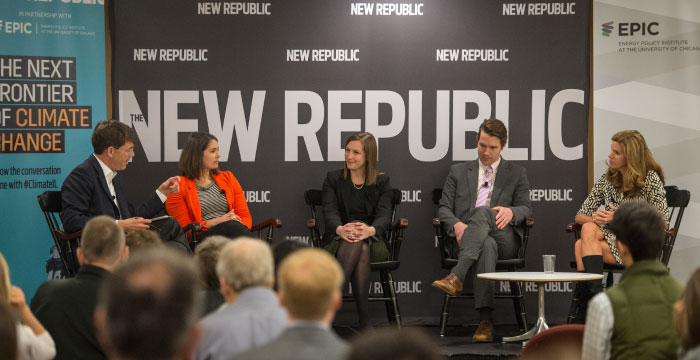 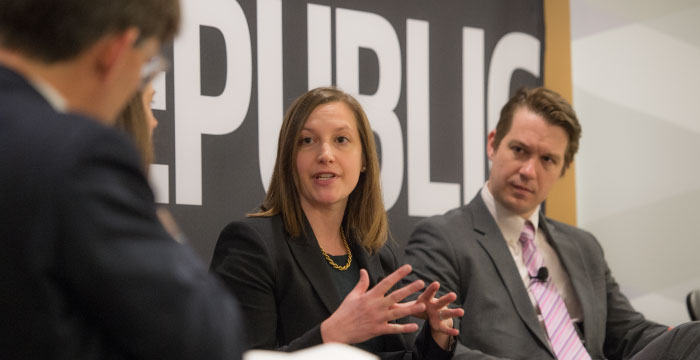 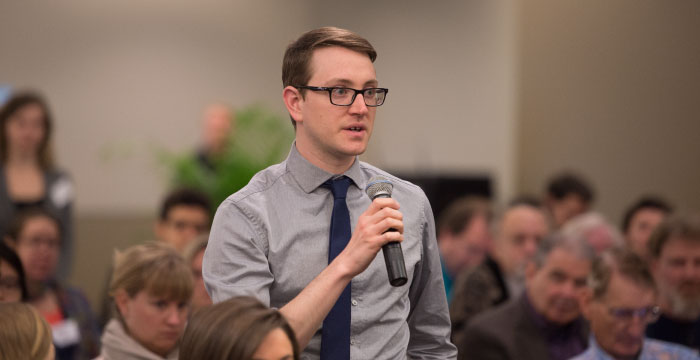 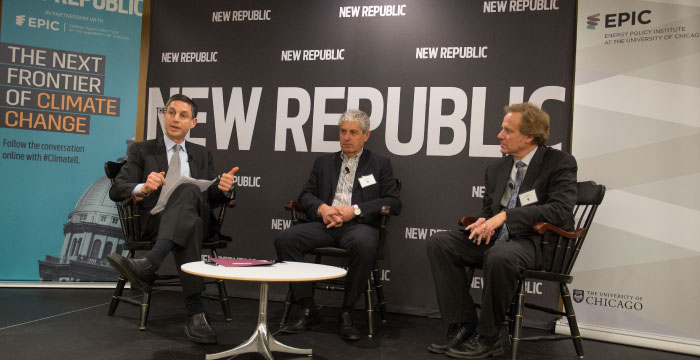 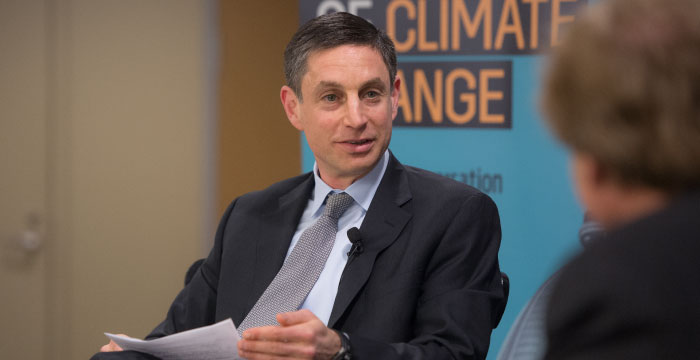 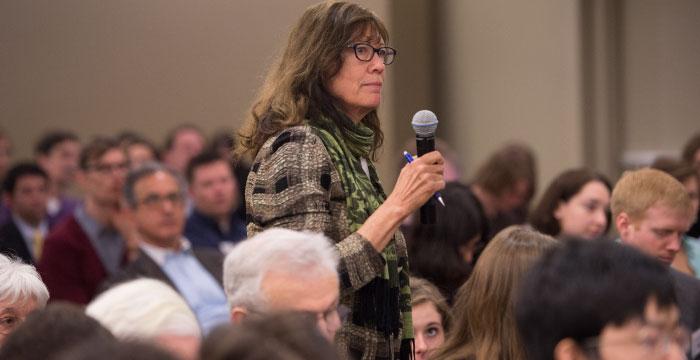 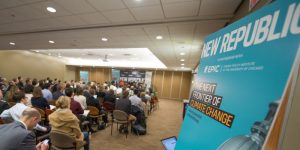 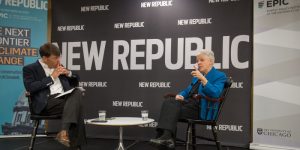 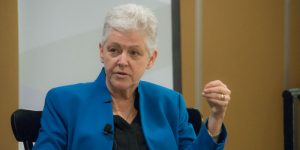 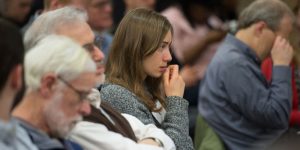 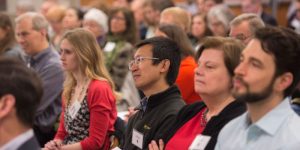 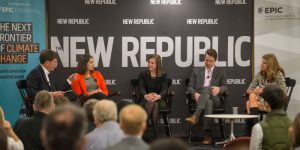 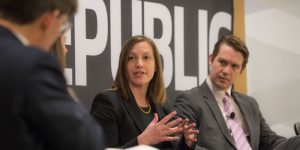 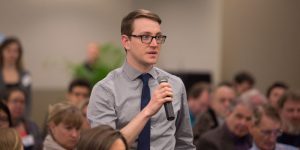 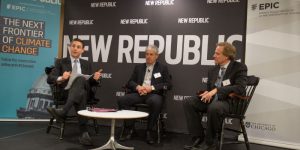 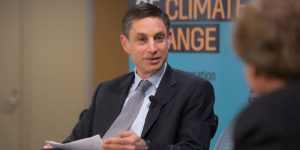 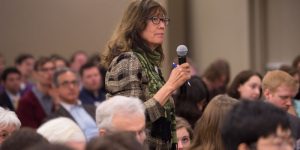 Climate change is a worldwide problem with very real local consequences. While effort are being made at the global level to confront the challenge, namely toward international climate talks in Paris in December, much work is happening at a state and local scale. The Energy Policy Institute at the University of Chicago and The New Republic hosted a symposium on April 10th that gathered experts to discuss these state and local efforts.

“What we did with the Clean Power Plan is actually look at the transition that’s happening in the market anyways,” McCarthy said, citing lower natural gas prices, cheaper solar, and aging utility infrastructure. “We’re projecting where those changes are heading so that we can see how we can move toward a low carbon future in a way that sparks the technology innovation and the job growth that are going to get us leaps and bounds ahead as we move forward.”

The Clean Power Plan sets emission targets for each state, but allows states to take the lead in how to reach those goals. The plan is designed to help the U.S. meet the Obama Administration’s pledge of a 28 percent reduction in carbon emissions by 2030—on track to an 83 percent reduction by 2050.

“We’re not having the contention in closed-door meetings that you would expect to see if you thought that Mitch McConnell’s effort was going to be successful,” McCarthy said. Instead, she said meetings with states are “more robust and more engaging” than ever before. “So the politics are one thing and reality is another…the public wants a low carbon future that brings us into the future and creates jobs.”

In a panel with Doug Scott, Illinois’ former head of the commerce department and environmental protection agency, Scott echoed McCarthy’s comments that states are hard at work – even those currently challenging the agency’s authority to compel them to reduce carbon emissions through lawsuits.

“I think they’re doing their due diligence and pursuing the plan B if the legal challenges don’t succeed,” said Scott, vice president of the Great Plains Institute, which helps states transition to clean energy.

States, companies and even individuals investing in renewable energy strategies will see a greater return over time, as compared to traditional energy sources, said Invenergy CEO Michael Polsky, who spoke on the panel with Scott.

He compared fossil fuels to typewriters, and renewable energy to computers.

“When you see all these companies like Google, Apple, and Cisco buying renewables, they are not buying renewables because their corporate strategy is to green the company, they buy it because it is a lower cost,” Polsky said, noting that he is purely a businessman and got into the business of renewable energy because “it made good business sense.”

EPIC director Michael Greenstone, who moderated the panel with Scott and Polsky, emphasized the international importance of the Plan.

“I think the impact of the Clean Power Plan can’t be overstated,” said Greenstone. “It completely was a game changer. My view is that it led to the agreement with China in November. It led to China agreeing to reduce carbon emissions. The consequence was that it changed how people thought about what could possibly happen in Paris and that the world might actually begin to confront climate change in a meaningful way.”

While the Clean Power Plan drives national efforts to confront climate change through a state-based approach, one cannot ignore the incredible strides cities are making to face this challenge—and how much more still must be done at the city level. That is why the University of Chicago launched the Urban Energy and Environment Lab, one of five labs aimed at testing the best policy approaches to confront these challenges at an urban level.

Pacyniak noted that city officials across the board have realized the importance of addressing the localized effects of climate change. Even in states with conservative leadership, officials acknowledge the urgency to address the consequences of extreme weather conditions – partly because the public urges them to act.

Francetic agreed with the need to adapt because of the impacts of extreme weather.

“Adaptation is really necessary as we watch how dramatically the weather is changing,” Francetic said. “We are feeling the consequences now.”

For Chicago, improving infrastructure to deal with weather issues like flooding is of particular interest, especially for communities with the least resources that tend to be the most at risk, she said.

Gajewski reflected on a similar concern in Philadelphia.

“Extreme weather is very rapidly changing public opinion and it’s very rapidly beginning to change operationally how we address the work in our cities,” she said.

While Philadelphia suffers generally from aging infrastructure, data has shown that fluctuations in weather are accelerating the degree of decline, which needs to be quickly addressed in the immediate future, Gajewski noted.

Some of these challenges require innovative approaches, which is where Urban Labs comes in, Berndt noted. She spoke about coupling Chicago’s spirit of entrepreneurship, innovation and research to find solutions for pressing environmental challenges.

“What we’re trying to do is leverage all of the innovation that’s out there to think about how we are going to address climate change,” Berndt said. “But we also want to make sure as we are choosing strategies and taking different approaches that we are also gathering data and analyzing these various approaches, and seeing whether or not and for whom they work well.”

To gather the best ideas from community groups, business leaders, and other stakeholders, Urban Labs has launched a one million dollars contest: the Innovation Challenge. UChicago researchers will work with key civic and business leaders to test the award-winning ideas in hopes of guiding successful policies that can then be implemented nationally, and even internationally.

Berndt says she hopes the challenge will leverage the innovative spirit within urban center to help foster promising ideas and partnerships to evaluate new policies through research.

Areas of Focus: Climate Change
Definition
Climate Change
Climate change is an urgent global challenge. EPIC research is helping to assess its impacts, quantify its costs, and identify an efficient set of policies to reduce emissions and adapt...
More on this Areas of Focus / Research Theme
, Climate Law & Policy
Definition
Climate Law & Policy
As countries around the world implement policies to confront climate change, EPIC research is calculating which policies will have the most impact for the least cost.
More on this Areas of Focus / Research Topic
Related...