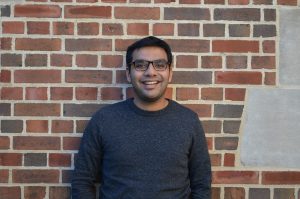 Vishan Nigam’s interest in policy issues developed through political debates with friends in his central New Jersey hometown. But during his undergraduate years, he discovered a more rigorous angle from which to approach policy.

“I found myself engaging with economics research, and especially with the statistical tools that could be used to measure costs and benefits,” he said. “It was exciting to have estimates of the causal effects of policies from immigration reform to education funding.”

So Nigam earned his bachelor’s in economics from Princeton University, where he conducted independent research on violent conflict and educational attainment in Colombia, as well as on immigration enforcement and traffic cop behavior in Texas.

He also tutored introductory microeconomics in college, eventually becoming head tutor at Princeton’s in-house tutoring center. The experience has steered him toward his goal of getting a PhD and becoming a professor of economics.

“It’s fun to explain economics concepts to students using examples relevant to them,” Nigam said. “I really like the teaching element.”

At EPIC, Nigam works for EPIC Director Michael Greenstone on a variety of projects, including examining the links between social norms and electricity shortages in India, crop choice decisions of U.S. farmers facing climate change and the economics of marine-protected areas. Nigam said he previously didn’t have a particular preference toward environmental and energy economics, but that Superstorm Sandy and recent hurricanes whose intensity are linked to climate change opened his eyes.

And while investigating the EPIC pre-doctoral fellowship, Nigam noticed EPIC’s work to calculate the effect of air pollution on mortality via the Air Quality Life Index tool, which has major implications for India. He thought of his grandparents who live in Delhi and whom he visited every summer as a child.

“The pollution has gotten progressively worse,” he said. “I remember when I was looking at the [EPIC] job, I thought, ‘This is something my grandparents have to deal with every day.’ There’s relevance there.”