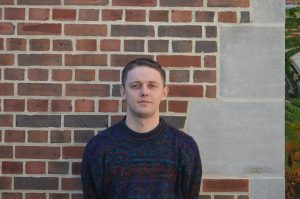 Tom Bearpark has long been interested in politics and policy. After growing up in a small town in northern England, Bearpark moved to London at the age of 18 to pursue a degree in economics and philosophy at the London School of Economics (LSE).

He took advantage of living in the capitol city of the United Kingdom and volunteered during summer 2014 for the Labour Party. Economics was thus a natural fit for Bearpark, who saw it as an important tool in sound policymaking.

“I want to understand the philosophical underpinnings of what we’re aiming to do with policy, and the economics is more about how to best implement the policies that we want to do,” he said.

Upon graduating from LSE, Bearpark began working as an analyst for the Office for Gas and Electricity Markets (Ofgem), Great Britain’s energy regulatory agency. In two years, he worked his way up to an economist role within Ofgem’s Office of the Chief Economist. He also spent three months in Brussels working for the Council of European Energy Regulators.

Bearpark said he wants to devote his career to working on issues related to climate change and economic development. He also believes in making economics more inclusive and interdisciplinary, which led him in 2016 to co-found and chair a networking organization open to all employees of the U.K. Civil Service. The group, called “Exploring Economics,” hosted workshops, seminars and other events and has grown to include members across multiple government departments and regions of the United Kingdom.

Bearpark said his time working in government was particularly valuable for understanding how to get the attention of policymakers.

“I think I can definitely appreciate now how to effectively target things at policymakers,” he said. “I can think, ‘nobody’s going to care one bit about 99 percent of things we’re doing with … very complicated models.’ You need to really, really narrow down what our message is, and explain it in an accessible but accurate way.”

Bearpark left the civil service to gain the technical skills that would allow him to more deeply understand the environmental economics that underpins climate and development policy. He earned a master’s in economic research from the University of Cambridge before starting at EPIC this summer.

At EPIC, Bearpark works with the Climate Impact Lab, a multidisciplinary team of researchers from EPIC, the University of California, Berkeley, Rutgers University and Rhodium Group. His work primarily focuses on quantifying the effects of climate change on conflict and migration patterns.