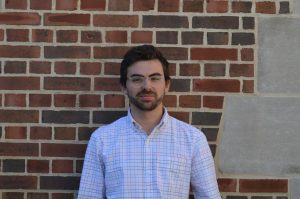 Simon Greenhill entered college planning to become a journalist. He had been heavily involved at his high school newspaper in Redwood City, California.

Greenhill particularly enjoyed long-form, investigative journalism because it required a deep dive into complex issues with the ultimate goal of understanding a societal issue. As an undergraduate at the University of California, Berkeley, Greenhill realized he could do the same thing in economics.

“In both cases you’re trying to look at a certain base of evidence, whether it’s data or interviews or both, and come up with a story that helps you understand what’s going on in the world,” he said. “And that’s always been my main interest.”

Greenhill said he has always been concerned about the environment, stemming from frequent childhood backpacking and camping trips. But it wasn’t until he wrote a paper on renewable energy in Hawaii for an introductory economics class at Berkeley that he saw economics as a tool for protecting the environment.

“I had a naturalist perspective, thinking that the environment is a nice public good we should preserve, rather than [looking at] the economic aspect of it,” Greenhill said. “I then came to realize that there are actually good economic solutions to that problem.”

At EPIC, Greenhill works with the Climate Impact Lab, a multi-institution collaboration that works to calculate measure the social costs of climate change, with a primary focus on how climate change will affect human migration.

Even in his relatively short time at EPIC, this approach to examining the effects of climate change has been eye-opening.

“I think even though I came to an interest in climate change from the nature side of it, I’ve grown to realize how profound the impact on society is going to be,” Greenhill said.