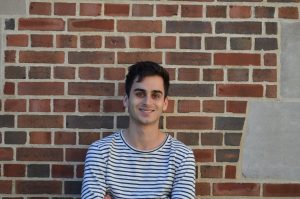 Michael Cahana remembers being attune to environmental issues at a young age, though doesn’t remember the cause.

He was sure, however, that he was interested in studying policy in some form when entering Northwestern University.

“The thing about economics that kind of stuck me with me is that it allows you to frame environmental problems in mathematical contexts so that you can better inform your policy outlook on those problems,” said Cahana, who graduated with a bachelor’s in economics and minors in computer science and environmental policy from Northwestern last spring.

Cahana, who grew up in Philadelphia, was particularly drawn to economics as a major after taking classes in energy and environmental economics that demonstrated the potential to one day “inform policy decisions and change what’s going on in the real world.”

He earned a chance to further examine real-world policy issues the summer after his junior year. Cahana was a research assistant for Northwestern economist Mar Reguant, examining large-scale renewable energy policies in California and real-time electricity pricing in Spain.

At EPIC, Cahana works with Professors Ryan Kellogg (Harris Public Policy) and Thom Covert (Booth School of Business). He is currently investigating how oil and gas companies innovate during cycles of boom and bust.

Looking ahead, Cahana said he is openly considering his options, including pursuing a PhD. For now, he’s focused on bolstering his research skills and deepening his knowledge base in environmental and energy economics.

Bottom line, he says: “I have a strong sense I want to work in the fields of environmental policy and energy policy as it relates to environmental impacts.”