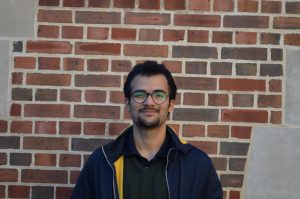 Chinmay Lohani came to the University of Chicago, and EPIC in particular, for the normal reasons: strong academics, leading economic research and prestige. There was one other passion area that drew him to there.

“The talks have been great, the academic environment has been great, but also I really looked forward to coming to Chicago because I’m very invested in music,” he said. “Most of my friends growing up were musicians, and I also try to sing. I count myself as an amateur singer. What that did was made me very cognizant of the music scene in any place that I stayed in, and … I would certainly want to tap into the music network here.”

The Chicago music scene is far removed from Dehradun, a small town in northern India near the Himalayan Mountains where Lohani grew up. He earned his bachelor’s in economics from the Indian Institute of Science in Bengaluru and subsequently got his master’s in economics at the London School of Economics.

Just several months later, he came to Chicago to work for EPIC. Lohani will work with Fiona Burlig, an assistant professor at Harris Public Policy, on energy research, including examining how consumers in Delhi, India, respond to changes in electricity prices.

Lohani said his interest in economics was spurred by a pair of undergraduate-level classes. The first was a broad class on governance, featuring speakers mostly associated with policy work in India.

“That made me really interested in this social policy agenda and how that shapes peoples’ lives,” Lohani said.

The other class was on game theory, which piqued his interest in behavior modeling with payoffs. In other words, he realized he’d like to apply technical skills to see how people behave in certain settings, making economics an ideal fit. EPIC is a good fit because of its policy focus, Lohani added.

“Economics seems to be the right point where you can think about things in an abstract fashion, but also see them applied somewhere,” he said. “I feel work is very satisfying if you think that it has some sort of an impact. That, in general, is a tendency that I would like to inculcate and embrace.”

Lohani said he will likely pursue a PhD one day. Either way, looking to the long-term he wants to return home to India.