Percentage of the U.S. Population Experiencing a Decrease in Average Life Expectancy, 1970 vs. 2020 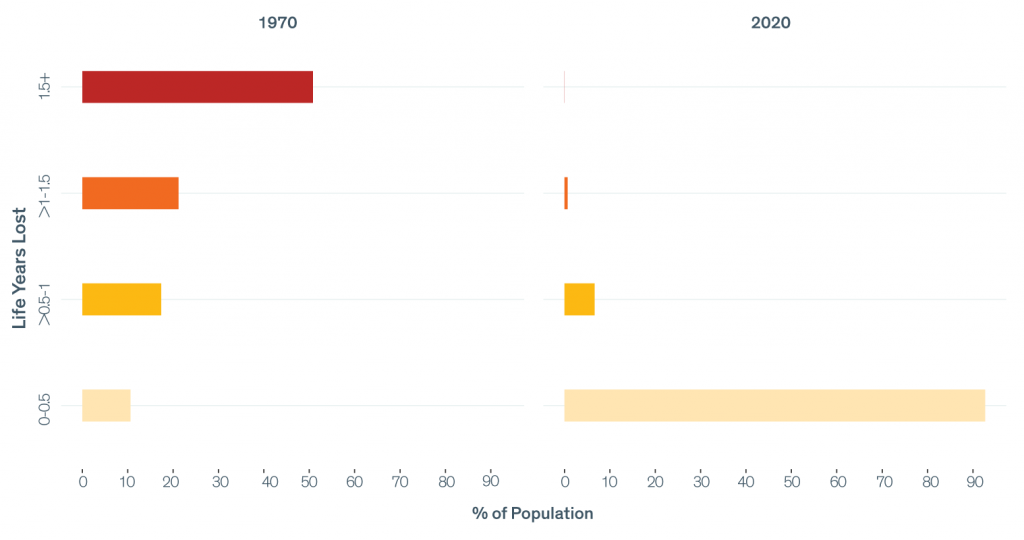 While wildfire-induced pollution has contributed to an uptick in specific sections of the United States (as chart #5 explains), particulate pollution is generally not considered a major problem inmost of the United States today. But, that wasn’t always the case. Following World War II, American industry rebounded from the Great Depression, the population grew as the “baby boom” generation was born, the first highways were built, and droves of Americans fled for the suburbs for new homes outfitted with modern appliances. With home and industrial energy consumption increasing and more vehicles on the roads, pollution began to increase.  By 1970, Los Angeles had become known as the smog capital of the world, and other large metropolitan areas weren’t far behind. More than half of the U.S. population was breathing air so polluted that, if sustained, they could have seen their lives cut short by 1.5 years or more. Another 38.6 percent could have been losing a half to 1.5 years off life expectancy, if sustained. Pollution, now a part of everyday life for many Americans, citizens had enough. Millions across the country marched for a cleaner environment on the first Earth Day in April 1970. Just months later, Congress passed the Clean Air Act, which quickly made an impact on the quality of the air Americans breathed. Today, on average, the particulate pollution that Americans are exposed to is only 32.7percent of what it was in 1970.And, they’re living longer because of it. Reductions in particulate pollution have added 1.3 years to the life expectancy of the average American. Just a small sliver of Americans now experience pollution so bad that it’s cutting more than a year off their life expectancy. The majority, 93 percent, are experiencing barely any or no impact on their life expectancy due to particulate pollution.