As the UN hosts its annual meeting on climate change this week, it is imperative that we continue to place an emphasis on the strongest evidence to inform how our society should respond. Last month, coincidentally timed with the Thanksgiving holiday, the U.S. government released one such summary of evidence – its latest National Climate Assessment. This sweeping report summarized the work of thousands of top researchers and pointed towards one overwhelming conclusion: climate change is occurring, predominantly driven by human activities, and harming people in ways we can see today that will only get worse without further action. One number you probably saw grabbing headlines is that warming could clobber the nation’s economy by 10%. That number did not appear in text of the report. It was instead interpreted from a chart in the final chapter. The way it resonated shows how eager people are for this kind of risk-based economic assessment.

But the statistic mischaracterizes the evidence. How do I know? I, working with a team of climate scientists, economists, and computer scientists, produced that evidence. It originated in a peer-reviewed analysis that was published in Science magazine last year.

Let’s unpack this “10%” a bit. The original statement warned that climate change could “knock as much as 10 percent off the size of America’s economy by century’s end.” It only takes a quick glance at the figure from which that number is drawn for even the most stubborn observer to see that we emphatically did not only look at extreme scenarios. 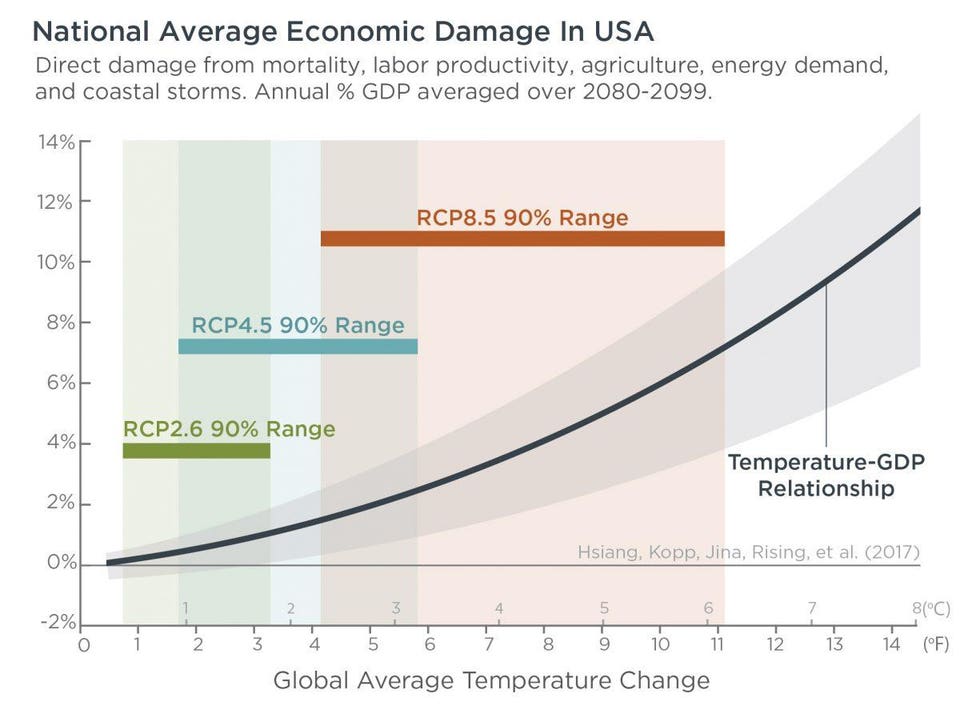 In one sense it’s an overestimate. We were characterizing the risks that would result from the U.S. economy not responding to climate change, not making predictions of the future. While it is true that we estimated damages as high as 10% of GDP annually at the end of the century for warming of 15°F above pre-industrial levels, the odds of a temperature change that would drive damages of this magnitude are slim. In fact, they are less than 1-in-100 by our original calculation. Under a scenario of continued growth in global emissions, 9-out-of-10 global change temperature projections fall approximately in the range of 4°F to 11°F by 2100. The median change is closer to 6°F. We deliberately incorporate tail risks in our research, not just “most likely” outcomes, because consideration of tail risks is crucial to sound risk management. We also include rosier outlooks representing ambitious global mitigation efforts. Though it cannot be taken for granted, if the world wakes up to the reality of climate change and adheres to the goals of the Paris Climate Accord, we might follow a moderate warming scenario with a 90% chance of falling in the range of approximately 2°F to 7°F of warming by 2100. Our research suggests the nation’s GDP would be about 1% to 4% smaller than would otherwise be expected.

In another sense, 10% may be an underestimate. Our research takes a transparent and data-driven approach to measuring climate damages that have dramatic implications for society — how our health, our well-being, our social stability, the food on our tables, and even our jobs, all stand to be affected. However, it’s not an estimate of economy-wide damage. We tally only a subset of consequential impacts — how climate change will impact health, labor and agricultural productivity, energy demand, crime and coastal property. These are important, but we leave out many other effects that could be as dramatically affected or worse, such as ecosystem loss, changes to water availability, wildfires, migration, and many others that the NCA details. A measure of total economy-wide costs would have to include these other categories.

So, is a metric like this useful? Nationally, yes. It gives us the scope of the problem and lets us benchmark combating climate change against other policy priorities. But risks to the local economy are also important — the threat posed to major industries in my area, my supply chain, or property along my community’s coastline. Every day we use information about probable outcomes to make decisions. We buy car insurance, choose to take an umbrella, invest in retirement funds. Climate change is no different and due to the work of thousands of researchers, we have a better view of those risks than ever before. Our research holds the microscope up to every county and every emissions scenario, examining a range of outcomes from health to food to jobs. It’s information local decision-makers are hungry for, and until recently it wasn’t possible with any real rigor. There’s been an explosion of econometric research that takes advantage of natural weather variation to understand, through big data, the role of precipitation, temperature, storm surge and other climate factors in influencing economic activity. We know, for instance, what a 105°F degree day in Iowa means for corn yields, and how rising sea levels might expose more property to the threat of storm surge.

This research and other efforts highlighted in the NCA shows who is affected, where they are affected, and how much risk they face. Synthesis work like the NCA gives a better sense of regional granularity, and our big-data approach to climate research is helping fill in the key dates and numbers that a policymaker or investor would need to really think strategically about the risks of climate change. We have the information necessary to take a rational approach to the problem, and one that can lead to overall benefits for the economy if we invest correctly. Our localized approach to studying the relationship between climate and society reveals that the burden is spread unevenly. In many counties, GDP decline could total more than 10% by 2100, and in the worst-hit county, Florida’s Union County, losses could near 28% for a likely warming scenario under continued emissions growth (the 7°F median change, not the extreme 15°F change highlighted in press coverage). The combined tally almost certainly understates the extent of the damages, because the worst effects are concentrated in places where incomes are lowest. Tumbling incomes in poor counties have a correspondingly small impact on nationwide GDP, meaning the economic burden of climate change is reduced because it falls on those with low incomes.

If the burden is spread evenly, 1% or 2% of national GDP might seem manageable, but we will not all be equal in the face of climate change. Across the United States, there will be winners and losers. What is lost in all of this noise is the sad fact that even those smaller numbers are too high a cost. They come from a subset of outcomes that are well-measured. As ever in this debate, it is important that we look beyond the headlines, beyond the averages, and examine the people at the heart of the issue. Look at the mass of evidence that points to people who will actually be negatively affected by climate change. They are not abstract people not-yet-born and in some far-off land. They are your neighbors. They are your friends. They are you. Combining local climate projections with historical observations yields a personalized, evidence-based outlook of future risk. Our ongoing research is mapping out these local impacts across the globe.

Areas of Focus: Climate Change
Definition
Climate Change
Climate change is an urgent global challenge. EPIC research is helping to assess its impacts, quantify its costs, and identify an efficient set of policies to reduce emissions and adapt...
More on this Areas of Focus / Research Theme
, Climate Economics
Definition
Climate Economics
Climate change will affect every sector of the economy, both locally and globally. EPIC research is quantifying these effects to help guide policymakers, businesses, and individuals working to mitigate and...
More on this Areas of Focus / Research Topic
, Climate Change and the U.S. Economic Future
Definition
Climate Change and the U.S. Economic Future
The effects of climate change will be different across the country, with some of the worst impacts falling on already-disadvantaged regions.
More on this U.S. Energy & Climate Roadmap: Policy Insight
Related...