You may have heard there’s an election going on. Under normal circumstances, this would be a great time to do a serious deep dive into the candidates’ energy policies and compare them. But circumstances are not quite normal this year.

The Trump campaign’s primary energy proposal relies exclusively on eliminating all executive and congressional limits of fossil fuel extraction on federal lands and waters to generate some eye-popping alleged economic benefits of additional production. Never mind that the proposal relies on outdated energy price assumptions, like $100 a barrel oil. The proposal’s sole source is an “unskewing” of the official numbers from the nonpartisan Congressional Budget Office. Well, not really: The first thing they do is lop 25% off of the top of their source’s estimates to be “conservative,” which is a great unintentional description of what it means to be Conservative these days. Amazingly, they still manage to end up with a higher estimate of government revenue from income taxes than the original study, which is really quite the feat.

In the context of the rest of this election, a serious analysis of this plan is like pointing out a shopping cart ding on a car that’s been hit by a train. Since comparing the merits of the proposals would not be fruitful, I’d like to use this post to address a common narrative that started long before Mr. Trump was on the ballot. That is, that government regulations are waging a “war on coal,” and that this war is killing the coal industry (particularly in Appalachia).

Today, coal powers about one third of our electricity—down from about half over the past few decades. Attributing the decline of coal communities to President Obama’s “war on coal” is an easy sell: Just look at what’s happened to coal production from Appalachia since he’s taken office: 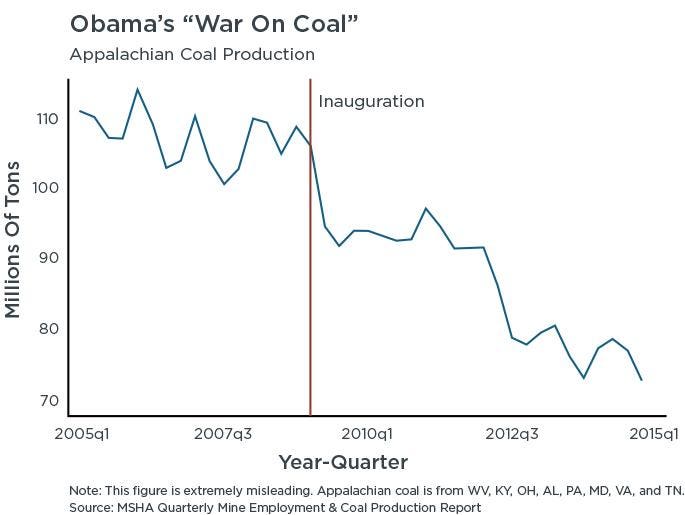 Mining output from this region has fallen by nearly one third since inauguration. This drop has coincided with new regulations that have raised the cost of operating coal-fired power plants going forward, such as the Mercury and Air Toxics Standard, the Cross State Air Pollution Rule, and the Clean Power Plan. Indeed, many on the political left are as eager to take credit for these reductions as those on the right are to assign blame. The result is a belief that these developments are due to actions taken in Washington DC, and therefore can be undone if only a politician favorable to eastern coal were in office. This attitude is succinctly captured by the slogan, “Trump Digs Coal.”

Here’s the thing: While recent regulations haven’t done eastern coal any favors, the death of the industry has very little to do with who is in the White House. If anything, “burdensome regulations” over the years may have done more to throw the region a lifeline than to put it out of its misery, as I’ll soon describe.

To see what’s really driving the death of eastern coal, let’s zoom out from the figure above and look at the longer-term trends in U.S. coal production—breaking it up into three major groups: Appalachia, Wyoming, and everyone else: 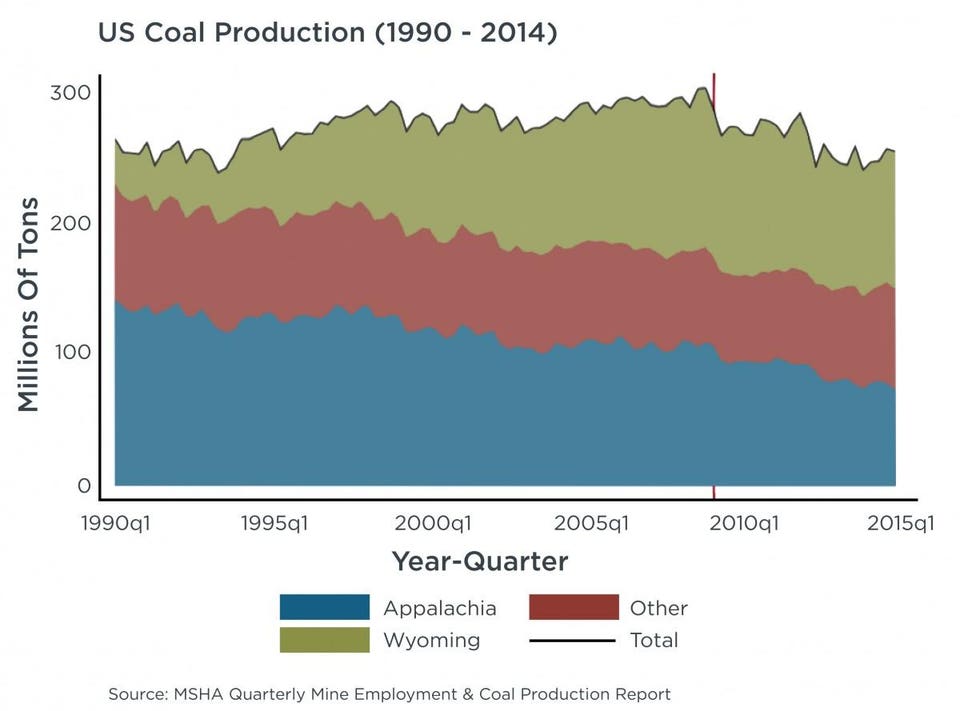 Quite a different picture. First, at the start of last year, the United States was actually producing more coal than it did in the early parts of the 1990s. Second, it’s hard to notice a discernible break from the long-term trend in Appalachia. The decline of eastern coal has been going on for decades. While it may be good sport to blame Obama for things that occurred before he ever held office, this is probably a stretch.

Instead, the growth in production from the Powder River Basin (PRB) in Wyoming (and Montana) is responsible for the long-term decline in output from the east. What explains the explosion in output from this region? Here, the specter of regulation rises as a potential explanation: PRB coal is low in acid-rain-causing sulfur, so it became more desirable as “compliance coal” after the Clean Air Act Amendments of 1990 started a cap-and-trade program for sulfur emissions. This might lead one to think big government Washington regulations created the market for PRB (at that time George H. W. Bush was in the Oval Office).

But again, it’s not what you think. In fact, it’s been shown that the drop in rail freight costs following deregulation of the railroad industry made Powder River Basin coal economical before sulfur regulations went into effect. This allowed PRB coal to be shipped cheaply to areas that had previously relied on coal that was more expensive to get out of the ground, but did not have to travel as far.

If anything, I have shown in my own work that cost-of-service regulation actually worked to preserve the market for high-sulfur coal longer than would have otherwise been the case. While deregulated power plants were switching to PRB coal, regulated power plants were more likely to install equipment to remove sulfur gases from the emissions of plants burning high-sulfur coal. They did this because regulations allowed them to collect interest on the value of the equipment from ratepayers. In fact, the original Clean Air Act passed with the support of the eastern coal lobby because it required new coal-fired plants to build such scrubbers. This may have had longer-term impacts they did not anticipate (no one builds new coal-fired plants).But, to be clear, this was the regulation the eastern coal industry wanted to protect itself from competition.

While its low sulfur content gives Powder River Basin coal an advantage, what’s really allowing it to drive eastern coal out of the market comes from nature. As described in this Scientific American piece, “no other coal seam on the planet is so big, so close to the surface, and so cheap to mine” as the Powder River Basin. While the popular image of a miner is someone hundreds of feet down a mine shaft hacking away at a 5 foot-thick seam, surface mines in the PRB use massive machines to scoop up coal from seams that are ten stories high. Or, perhaps more compelling shown graphically: 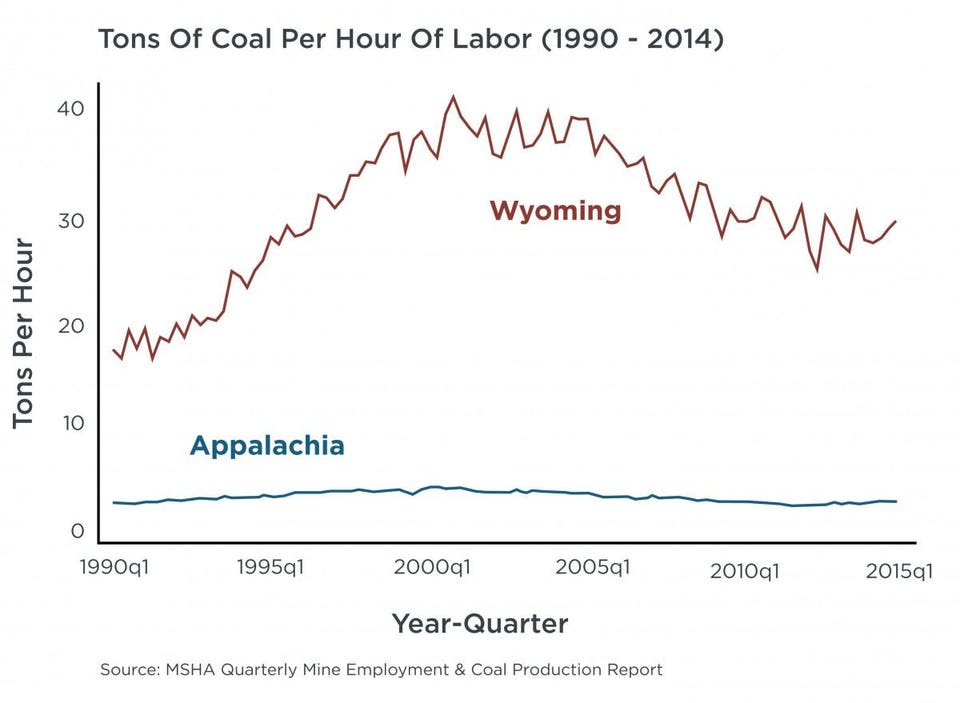 The irony here is that the main lever available to a president to affect coal production is through auctioning mineral access on federal lands—which happen to be in the Powder River Basin, not Appalachia. If Mr. Trump were to “dig coal” by expanding access to coal resources, this could only make the situation worse for eastern coal.

While the growth of Powder River Basin coal has squeezed Appalachia for the last 25 years, the most recent threat to the bottom line has come from another market-driven force: cheap natural gas resulting from the “fracking revolution.” The shift toward natural gas was helped by a massive expansion in generation capacity in the early 2000’s. This meant that there were plenty of idle generators waiting for fuel prices to make their output economical—which is exactly what happened when innovations in the drilling sector made it possible to access vast natural gas resources at prices far lower than in the past. The result has been a massive shift in our electricity sector away from coal (largely at the expense of eastern coal), and toward natural gas: 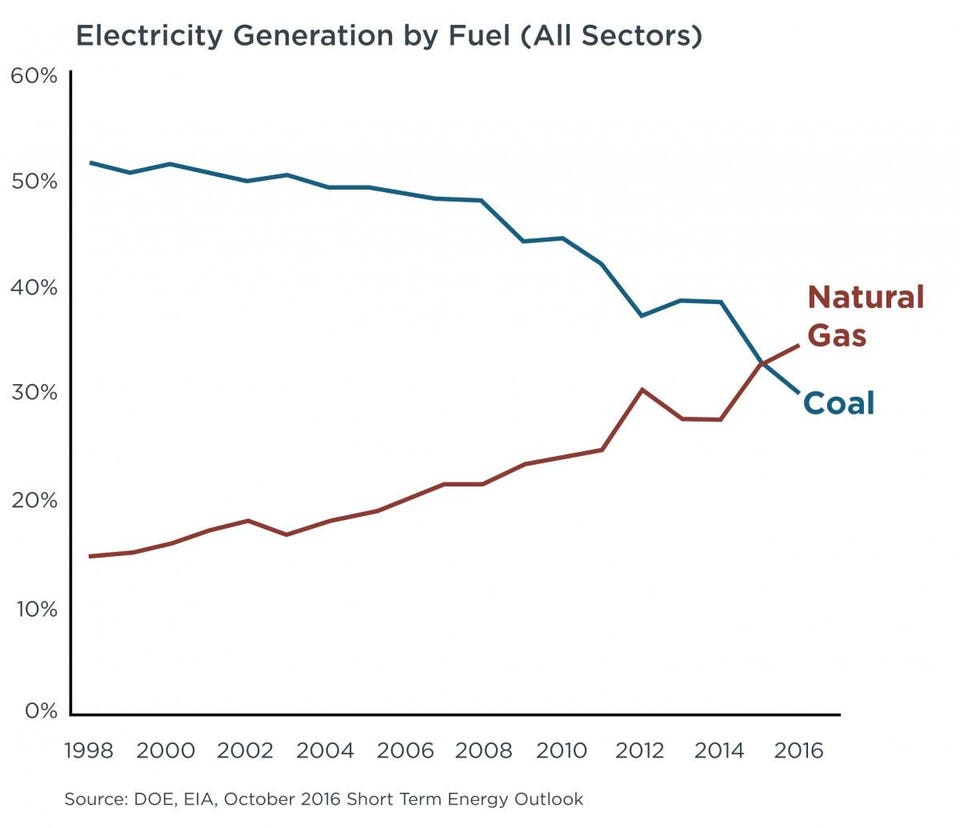 Once again, this has been the result of competition to provide electricity to consumers at the lowest cost, not heavy-handed regulation from Washington. Potentially opening up more federal lands to gas extraction, as Mr. Trump has proposed (though there is not much demand for this either given that production from private and state lands is already glutting the market), would only drive the price of natural gas lower and endanger even more coal-fired power plants.

Long-term declines in the eastern coal sector result from competition to deliver low-cost electricity—leaving only about 60,000 miners of eastern coal on the job. Even if all of these miners were concentrated in West Virginia alone, they would make up less than 9% of the local labor force. Going forward, there is certainly room for policy to help coal communities, but we should be under no illusions that Appalachia would return to some imagined state of glory if only the politicians would get out of the way.