Drilling Activity in the Months Around Lease Expiration 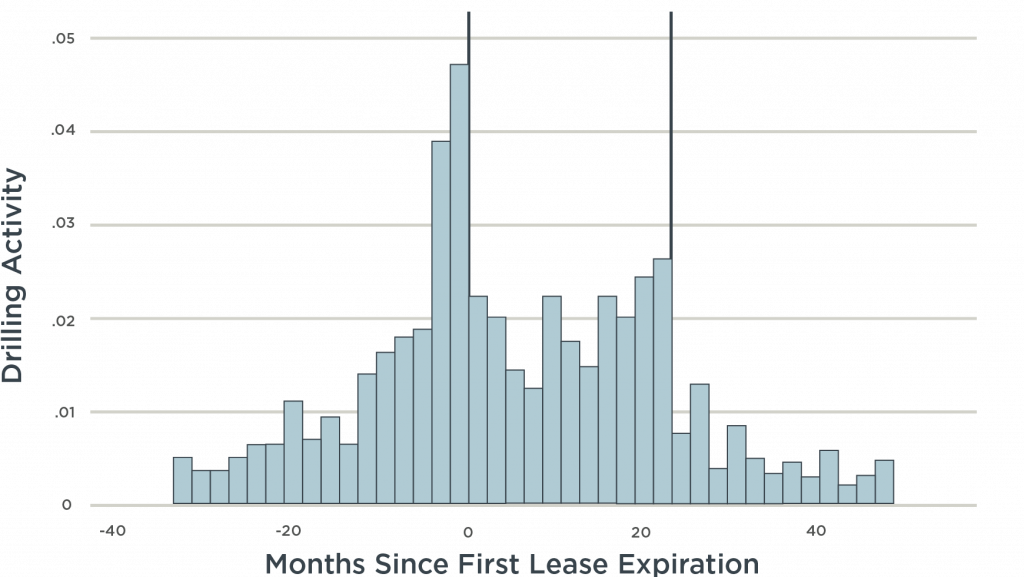 Along with providing bonus payments when they sign contracts with landowners and royalty payments once the oil and gas is produced, firms agree to a period of time when they have to drill a well or their contract will end. Drilling a well during what is known as the primary term ensures a secondary term when the company can drill more wells for as long as they choose.

In a study that examines the impact of primary terms on economic outcomes, Harris Public Policy’s Ryan Kellogg and his co-authors look at whether primary term expirations are influencing drilling decisions. To do so, they gather data from the Haynesville Shale in northwest Louisiana and find substantial bunching of Haynesville drilling in the months just prior to lease expiration. That is, the probability any given pooling unit is drilled is sharply higher just before the unit’s first lease expiration than it is at any other time. In cases where the first expiring lease includes a built-in two-year extension clause, the bunching occurs just prior to the end of the extension rather than at the end of the primary term itself.

Many leases — especially those in less productive areas of the Haynesville — are characterized by having only a single well that was drilled just before lease expiration, suggesting that drilling in these areas was primarily motivated by holding acreage for future wells rather than by immediate profits.

Kellogg and his co-authors, Evan Herrnstadt from the U.S. Congressional Budget Office and Eric Lewis from Texas A&M University, found that the primary terms can actually benefit the landowner and increase the total value that the landowner and firm receive together. Despite the inefficient bunching of drilling, the fact that the primary term accelerates drilling—and the associated royalty payments—creates value because the royalty alone would have caused drilling to occur too late.

Kellogg and his co-authors find, however, that the benefits of primary terms are limited when firms can use a single well to hold acreage sufficient for multiple wells. Primary terms in this situation only counteract the royalty-induced delay for the first well, not future wells.