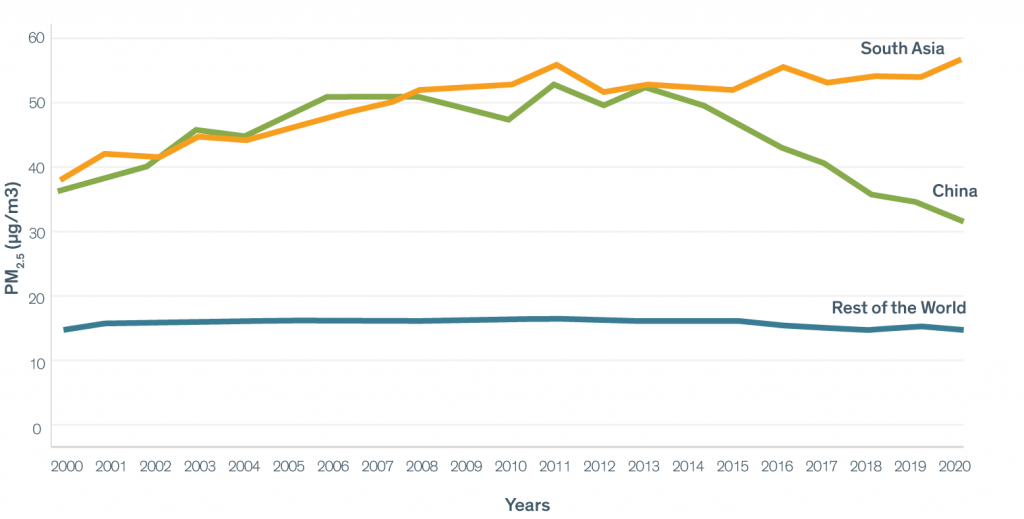 Over the past two decades, particulate pollution levels have remained largely unchanged for most of the world. But global average pollution has declined in recent years. That global decline is due entirely to China. Since declaring a “war against pollution” in 2013, pollution has declined by about 40 percent (as chart #4 explains). Meanwhile, pollution has increased in industrializing countries of the developing world such as in South Asia. India, for example, accounts for 44 percent of the world’s increase in pollution since 2013. This has been the case as developing countries are burning high amounts of fossil fuels without the policy safeguards China and developed countries have imposed.

The improvement in air quality in some locations, and the spike in others, points to the fact that air pollution is globally a stubborn problem. In 2020, the onset of the Covid-19 pandemic was soon followed by lockdowns and travel restrictions across the globe, leading to improved environmental quality in numerous localized regions for a short period of time. Yet, at the global level, there was virtually no change in average particulate pollution levels, declining from 27.7 µg/m3 in 2019 to 27.5 µg/m3 in 2020—more than five times the WHO’s revised guideline of 5 µg/ m3. This pollution takes 2.2 years off global average life expectancy, relative to a world that met the WHO guideline (5 µg/m3).