The near-term outlook for oil markets is a mess. Price volatility recently reached its highest level since the global financial crisis as traders, investors and the industry as a whole try to sort through the significance of two big changes: the rapid rise of the upstart U.S. shale industry, which grew from essentially nothing in 2010 to being the world’s sixth largest source of oil supplies in 2015; and Saudi Arabia’s decision to abandon its role as market manager.

These are important issues for the near term, but they pale in comparison to a much bigger set of long-term issues. Two mega-trends are gaining steam that together have the potential to truly upend the energy industry.

First, signs of serious competition to oil in its most important market—transportation—are beginning to emerge. In the United States, more than 70% of the oil we consume is burned in our cars, trucks, ships and aircraft. The figure globally is only slightly less, at 64%. And for at least the past 100 years, oil has been the only game in town when it comes to mobility fuel.

But based on a slew of data emerging over the past few weeks, that might be about to change. According to a new report from the Frankfurt School, global electric vehicle (EV) sales surged by nearly 60% last year, bringing the total number sold since 2011 to just over 1.1 million. That’s right—despite their higher purchase price, limited range and longer refueling times, electric vehicles took a massive step forward in 2015 even as oil prices collapsed. Incredibly, most of the growth came from China, where sales almost quadrupled compared to 2014. 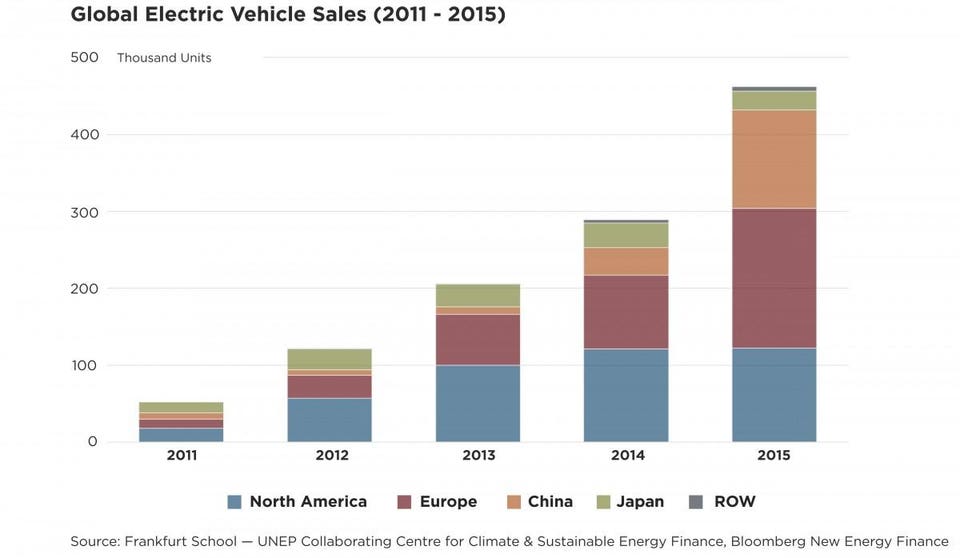 The notion of explosive EV sales in China should be supremely worrying for a global oil industry that is counting on that country to account for half of future demand growth. And while sales today represent only a tiny portion of the broader auto market—EVs were less than 1 percent of the 20 million passenger vehicles sold in China last year—things could change very quickly. Research released earlier this month by investment bank UBS argued that falling battery prices and high fuel taxes will make EVs cost-competitive with internal combustion engine cars in Europe by 2021 and in China by 2025. Meanwhile, many of the biggest barriers to widespread electrification like cost and range are beginning to fall. Both GM and Tesla plan to introduce all-electric models with 200 miles of range for roughly $30,000 this year.

Even in the United States, where lower fuel prices have put a dent in EV sales, the industry still attracted almost a billion dollars of financial investment in 2015 according to Bloomberg New Energy Finance—pretty much right in line with the 2010 to 2013 average.

Despite all of this, there is no doubt that the world is still going to need a lot of oil. But the sources that provide that oil may be about to change dramatically as well.

In the early stages of the U.S. shale industry, resource recovery factors averaged just 5% of the oil in place. Today, some of the best projects in shale sweet spots achieve recovery factors approaching 12%. But BP Chief Economist Spencer Dale, at a talk at the University of Chicago in February, suggested that a 25% recovery factor in the next five years might not only be possible, it might be conservative. Reaching that level would nearly triple U.S. shale oil resources.

The cost of recovering that resource is also likely to fall sharply. Already, according to energy consultancy IHS, drilling and completion costs in the key U.S. shale plays have fallen by 25% to 30% from 2012 levels. While estimates still vary widely, a consensus is emerging that U.S. shale production can grow by between 0.5 and 1.0 mbd annually with oil prices at roughly $70 to $80 per barrel—far less than the $100 per barrel assumed as recently as 2014. 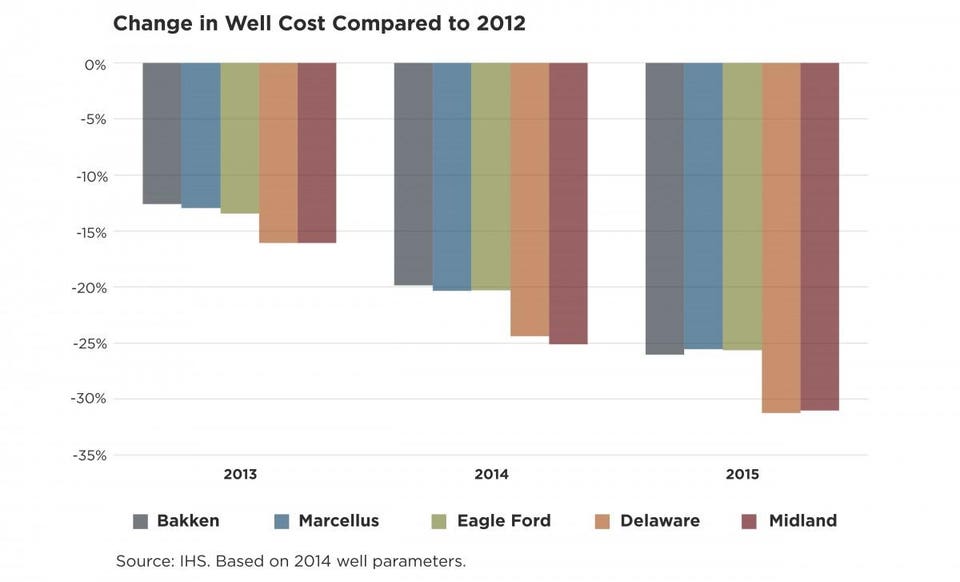 The result: less reliance on oil in transportation and a potentially rapidly-expanding supply of oil in the middle of the global cost curve. So what does all this mean? For one thing, it probably means that the world’s dependence on capital-intensive oil supplies such as Canadian oil sands, ultra-deepwater, and Arctic oil is set to diminish. Today, these resources account for roughly 10% to 15% of global oil supplies.

If that is the case, long-run oil prices should be lower. Moreover, by shortening global oil investment cycles, this new market structure could eliminate some of the most severe kinds of oil price volatility, meaning prices should be more stable. It would also almost certainly be a net benefit for the climate, as oil sands projects are among the world’s most carbon-intense upstream developments.

Lastly, this shift in market dynamics has direct implications for the structure of the oil industry. Capital-intense megaprojects in ultra deepwater and oil sands are a significant portion of the resource portfolio of the largest international oil companies. For example, synthetic crude and bitumen accounted for more than a third of proved liquids reserves for both Shell and ExxonMobil at the end of 2015. And Shell, ExxonMobil, Total, BP and Chevron all cite global deepwater as a core competency that is key to near-term production and revenue growth. Many of those same companies have also been slow to break into the shale industry. For some of the world’s largest and oldest oil companies, the future looks increasingly challenging.

For many of us, the last several years in the oil industry have seemed like a period of change almost unrivaled in history. In fact, the disruption in oil markets is just beginning.

Areas of Focus: Energy Markets
Definition
Energy Markets
Well-functioning markets are essential for providing access to reliable, affordable energy. EPIC research is uncovering the policies, prices and information needed to help energy markets work efficiently.
More on this Research Theme
, Transportation
Definition
Transportation
Mobility is central to economic activity. Yet, a lack of fuel diversity and continued demand growth have made the transportation industry a major contributor to global pollution and carbon emissions....
More on this Areas of Focus / Research Topic
, Electric Power
Definition
Electric Power
As the electric power system faces new pressures and opportunities, EPIC research is working to identify the mix of policies needed to accelerate the global transition to clean, reliable, affordable...
More on this Areas of Focus / Research Topic