Costs and Climate Benefits of the Tax Incentives 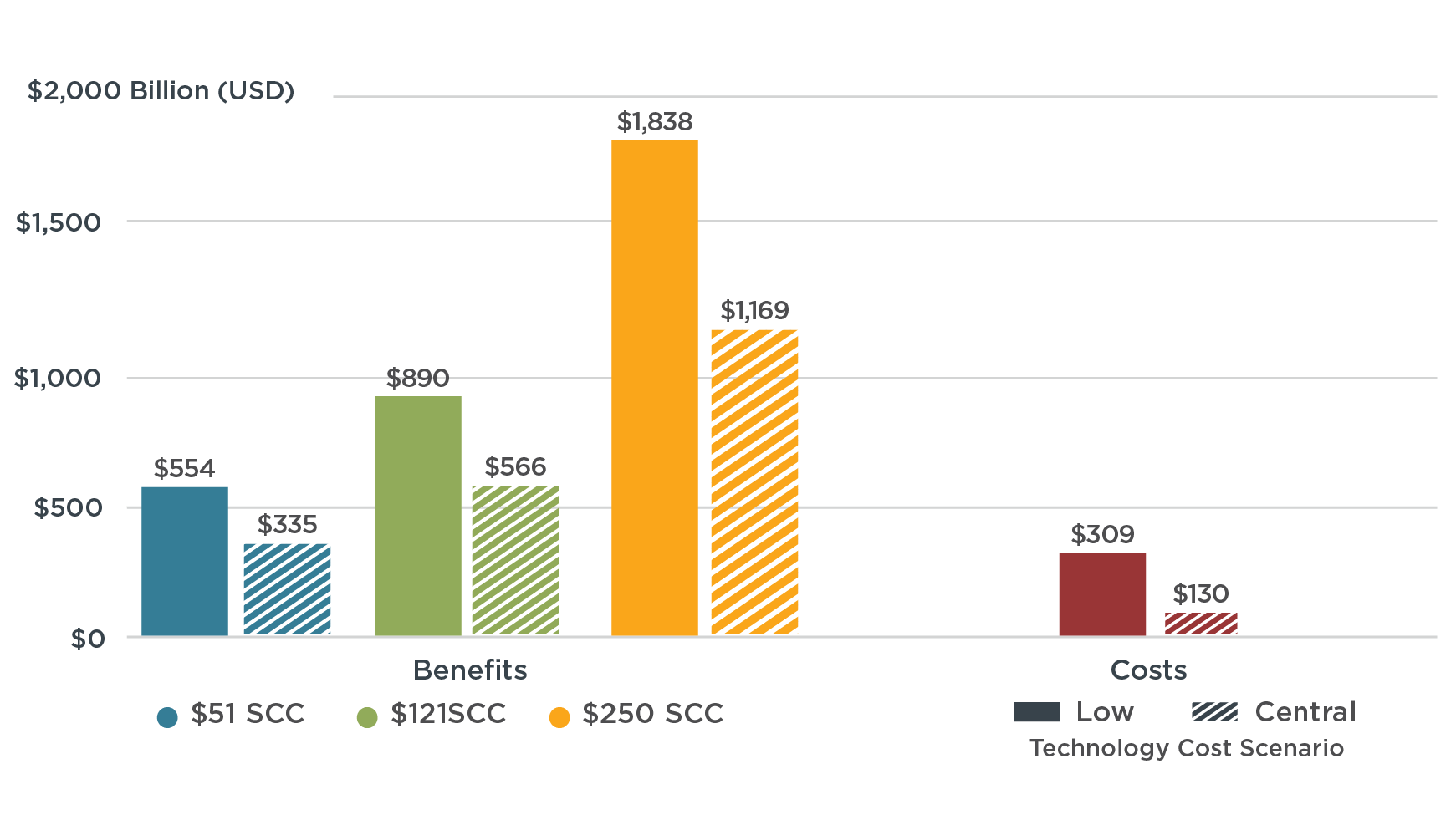 Tax credits to boost clean energy deployment were an important part of the climate provisions within the Inflation Reduction Act. EPIC and Rhodium Group measured how the benefits of broadly similar incentives stacked up to the costs. The credits are expected to reduce carbon emissions by 5.1 billion to 8.1 billion metric tons by 2050. Using various estimates of the social cost of carbon (SCC)—the monetized damages of an additional metric ton of CO2—as a guidepost, these reductions would translate to $335 billion to $1.8 trillion in benefits, depending on technology costs and the value of the SCC. On the cost side, the incentives would increase operating costs for electricity generation and require start-up costs for the government to fund them. Combined, these costs range from $130 billion to $309 billion. These costs are significantly less than the benefits that would result from the reduced emissions. In fact, the benefits outweigh the costs by as much as 4:1, depending on the scenario. It is important to note that these benefits do not include co-benefits from reductions in conventional air pollution, which would likely further improve the cost effectiveness.

When stacked up against other policies, the tax credits are one of the least expensive ways to reduce carbon emissions, costing around $33 to $50 per ton. This is lower—and likely significantly lower—than the value of the social cost of carbon, currently set at $51 per ton but recent evidence suggests that it is likely 3-5 times higher. In other words, the benefits of reducing carbon emissions are likely significantly higher than the cost per ton of reducing emissions through the tax incentives.

Areas of Focus: Assessing the Costs and Benefits of Clean Electricity Tax Credits
Definition
Assessing the Costs and Benefits of Clean Electricity Tax Credits
EPIC and Rhodium Group measure the costs and benefits of clean energy tax incentives and find the benefits are about four times greater than the costs and would lead to...
More on this Policy Memo: Build Back Better Act
, Climate Change
Definition
Climate Change
Climate change is an urgent global challenge. EPIC research is helping to assess its impacts, quantify its costs, and identify an efficient set of policies to reduce emissions and adapt...
More on this Areas of Focus / Research Theme
, Climate Law & Policy
Definition
Climate Law & Policy
As countries around the world implement policies to confront climate change, EPIC research is calculating which policies will have the most impact for the least cost.
More on this Areas of Focus / Research Topic
, Social Cost of Carbon
Definition
Social Cost of Carbon
The social cost of carbon is an essential tool for incorporating the cost of climate change into policy-making, corporate planning and investment decisionmaking in the United States and around the...
More on this Areas of Focus / Trend
, Energy Markets
Definition
Energy Markets
Well-functioning markets are essential for providing access to reliable, affordable energy. EPIC research is uncovering the policies, prices and information needed to help energy markets work efficiently.
More on this Research Theme
, Renewable Energy
Definition
Renewable Energy
Lower technology costs and supportive public policies are driving an increase in renewable energy in markets around the world. EPIC research is assessing the costs, benefits, and efficiency of policies...
More on this Areas of Focus / Research Topic
Related...