Earlier this year, the Supreme Court halted implementation of the central component of the Obama Administration’s climate strategy: The Clean Power Plan. Their ‘stay’ order on the rule—which requires states to cut greenhouse gas emissions from existing electric power plans by a third by 2030—prevents EPA from enforcing a September deadline for states to either submit their emissions reduction plans or request an extension. The Supreme Court’s action shook states already in the midst of planning, advocates and international climate negotiators who had just come home from Paris after pledging to reduce emissions.

But the move also shook businesses—throughout the energy industry and even beyond—as it injected a new layer of uncertainty into an already volatile energy scene. While uncertainty persists about whether the Clean Power Plan will be enforced, energy producers and consumers will rationally delay making important long-term decisions about which plants should retire, what kinds of new plants to build and whether to invest in clean energy technologies. Because power plants and other energy infrastructure projects are such long-lived assets, past experience indicates that this new source of policy uncertainty may affect America’s energy landscape for decades.

Even before the court’s decision, utilities and power plant investors had many unresolved questions. State plans for meeting the emissions reductions the Clean Power Plan required were either still up in the air or nonexistent. And—with the costs of clean energy technologies continuing to fall, natural gas prices sliding towards their lowest levels in two decades and global oil prices being as volatile as ever—the future cost of energy was, and continues to be, far from certain.

The court’s stay makes this erratic environment even more unpredictable. With so much unanswered, a group of power companies who together serve 19 states and operate nearly 100,000 megawatts of generating capacity—including Calpine , National Grid , Pacific Gas and Electric Company and Southern California Edison Company—filed a court motion in support of the Clean Power Plan. The power companies say the stay only “deepen[s] uncertainty”—uncertainty that is already “preventing them from moving forward with major investments.”

There’s a long docket of empirical evidence in economics supporting their assertions. Uncertainty about commodity prices and future economic policy can delay investment and other decisions like hiring. The energy sector is especially vulnerable to the effects of uncertainty due to the high level of capital investment and extent of long-term planning. Oil companies, for example, wait longer to drill new wells when oil price uncertainty is higher than they do when uncertainty is lower.

Policy uncertainty also affects clean energy technologies. Consider how wind plant investment in the U.S. fluctuated with the availability of the Production Tax Credit (PTC). The PTC provides a 2.3-cent per kilowatt-hour (kWh) incentive for the first ten years of a wind plant’s operation. Until recently, Congress only authorized the credit for short periods of time, sometimes less than two years.  At the end of every year or two, the industry faced the very real possibility that the PTC might not get reauthorized, and, unfortunately, half the time they were right.

Between 2005 and 2012, when Congress reliably re-authorized the PTC, wind energy investment soared. Capacity increased more than six-fold from 2005 to 2012, while the cost of generating electricity from wind fell by 24%. This episode of relatively stable incentives for wind power suggests that limited energy policy uncertainty can help deliver more clean energy at lower prices.On the other hand, when incentives for wind power were less certain, investment in new plants fell substantially.  At the end of 2001 and 2003, the PTC expired without a plan for reauthorization.  In the following years, new investments into wind fell by an average of two thirds.  More recently, the effect of PTC expirations has been even starker.  After adding more than 13 GW of new capacity in 2012, the credit expired and was not re-authorized until the start of 2013 after contentious congressional negotiations during the 2012 “fiscal cliff.” Without certainty about the fate of the PTC, wind project developers put new projects on hold, and investment in new plants fell 94% in 2013. 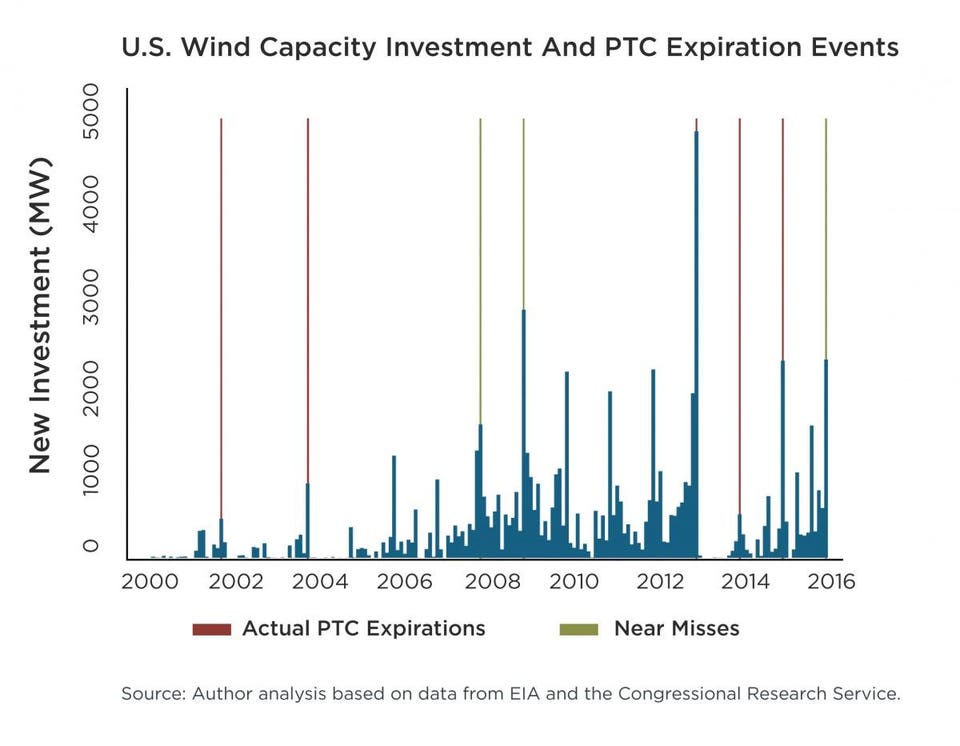 Uncertainty about the fate of the PTC is especially unfortunate in light of the fact that, by revealed preference, Congress has actually intended for it to be continuously available for all of the last 22 years.  Every time that the PTC expired and there was a technical lapse in its availability, Congress “grandfathered” in plants that were unlucky enough to be completed during one of those lapses.  Thus, all of the uncertainty about the PTC was technically unwarranted.

Listen to Thom talk about the impact the ‘stay’ on the Clean Power Plan is having on the energy industry in our new Off the Charts podcast with Sam Ori.