The Effect of Straw Recycling Subsidy on Straw Burning and PM₂.₅ 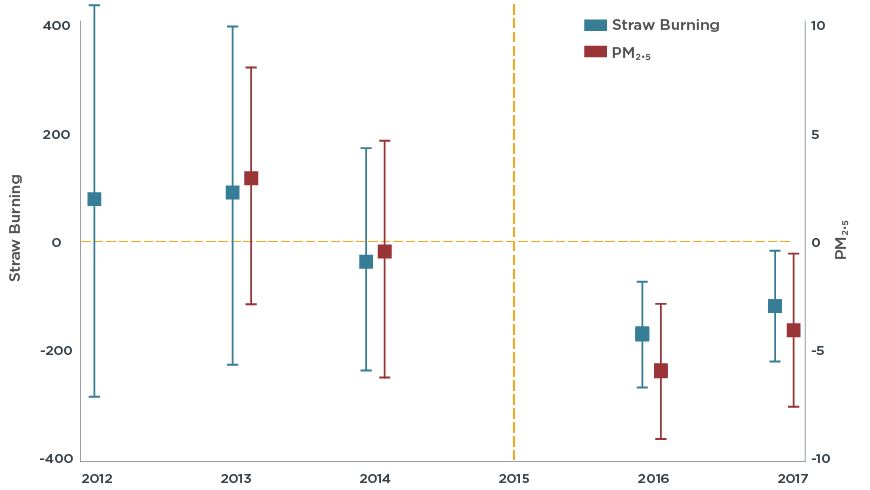 Note: The year 2015 (one year before the subsidy) is chosen as the reference.

In countries that rely heavily on agriculture, straw burning is a popular practice to clear fields and prepare for new crops. But it also contributes to harmful particulate pollution. In Eastern China, for example, straw burning can account for as much as half of the pollution during summer months. While governments have historically had trouble enforcing policies to limit straw burning, a new study finds that China’s recent straw recycling subsidy program is leading to less burning, less pollution, and about 18,900 averted premature deaths a year.

In 2016, the central government began providing farmers and recycling companies subsidies to encourage the recycling of straw in the top ten provinces with the most intensive straw burning. Each province received 100 million Chinese yuan (around 14.2 million USD) in 2016 to recycle straw, and that amount increased to 1.3 billion Chinese yuan in 2017.

In evaluating the subsidy program, Guojun He, the research director for the Energy Policy Institute at the University of Chicago in China (EPIC China) and a professor at the Hong Kong University of Science and Technology, and his co-authors found that the number of straw fires in subsidized provinces dramatically declined after the policy by 153 a year, relative to the non-subsidized provinces. This change brought down the annual average particulate pollution level by about 7 percent. As a result of these improvements, about 18,900 premature deaths could have been averted each year in China.

The researchers compared these benefits, which translate to about 55 billion Chinese yuan (around 7.85 billion USD), to the cost of the subsidy, the additional work to enforce the policy and encourage farmers to recycle straw, and the potential changes in agricultural production. Together, they estimate that the costs of the policy would be at most 2.6 billion Chinese yuan each year (around 367.6 million USD)—far below the benefits.