While low natural gas prices are something to celebrate for consumers, the mood among the owners of America’s nuclear power fleet is not so cheerful as low energy prices threaten their bottom line. In turn, the owners of nuclear plants are threatening to shut down unless the government (and ultimately the ratepayer) steps in to close the shortfall. They have even announced plant closings to show they mean business.

Ordinarily, this kind of thing might be left solely up to markets to sort out. But with nuclear accounting for almost 60% of the carbon-free electricity in the United States, it’s fair to say that losing nuclear plants make it a lot tougher to meet goals to avoid catastrophic climate change. So there is a compelling case that there is a public interest at stake with the potential closure of these plants.

The result: a high-stakes game of chicken is playing out between producers, consumers, and state regulatory commissions in capitols across the country to keep these plants open. New York made history last week when it decided it couldn’t do without nuclear and gave in to providing subsidies. The news came just a couple months after California decided the opposite—putting all its chips into renewables. Illinois continues to wrestle with the very same decision but has yet to place its bet.

Before celebrating New York’s approach as a template for low-carbon policy, it’s important to ask: Would these plants really shut down in the absence of government support? And supposing they would, if the problem is low prices resulting from an over-supply of power, is there a better solution than a subsidy that encourages more supply?

First, if the amount of the subsidy is tied to how much the operator requests, you should assume that they’re going to ask for more than they need (obvious, I hope).

Second, the companies at the center of these negotiations have multiple plants, so they make decisions on a particular plant keeping in mind the impact of that decision on the rest of its fleet. Closing a plant in one state after being denied subsidies is a way of signaling to regulators in other states that they seriously risk suffering the same fate. This means that companies may close profitable plants (and pay the cost), because it maximizes the total subsidy they will receive across all of their plants. It also means that firms may actually be eager to close plants as a means of driving up the price of electricity that their remaining plants will receive. Thus, their demands are less about unprofitability than about market power.

The final strategic consideration in these negotiations is about option value. Firms should be willing to endure periods of losses if keeping the plant open preserves the ability to make it all back and more when times are good. Thus, a subsidy that covers the operating cost of the plant is paying more than what the plant actually requires to make staying open in its best interest. It’s making the plant profitable in every year, rather than on average from now until the end of its useful life. Firms would love to be profitable every year, but only require the expectation of future profitability to stay open for business.

So should regulators take the industry at its word?

It’s important to note that—in spite of announced or actual “closing” of plants—hardly a screw has been removed from any of the nuclear plants recently “retired.” Decommissioning is a long-term process with many opportunities to change course as long as the operating license remains valid. This makes announcing closure a lot like convincing a child you’ll leave without them if they don’t get in the car: “I’m putting my shoes on….I’m putting my coat on…I’m getting the keys…I really mean it…” Regulators should not be so naïve.

Although pitched as temporary, urgent subsidies to expedite passage, these negotiations should be viewed as setting a long-term policy approach. If, in five years, natural gas prices remain low and renewables continue to expand (as there’s every reason to believe), we’ll be right back at the negotiating table with an industry on proclaimed life support. There are few policies that deliver less innovation than guaranteed payment, no matter the prevailing economics of the industry.

Is there a better approach? Let’s put aside finally putting a price on carbon (the easy way). I’ve crunched some numbers for Illinois’ Clinton Nuclear Power Station, which Exelon recently declared will “close.” It appears the root of the problem is less about low natural gas prices or the growth in renewables than our woefully inadequate transmission system.

Lack of transmission capacity underlies nuclear’s inability to recover their fixed operating costs in two ways. When demand is high, a congested system prevents distant nuclear generators from delivering power to profitable markets, leaving them on the sidelines upstate instead of making money in the city (note that it’s security, not economics that threatens to close the Indian Point plant in downstate New York).

Nuclear plants are also hurt by insufficient transmission when demand is low. This is because renewables generators receive $23 per megawatt-hour in production credits regardless of the market price of electricity. With low demand and nowhere for the wind’s energy to go, it drives the price lower and lower—until it turns negative and plants start actually being fined for their output. Nuclear plants are not built to respond to fluctuations like this, meaning that a -$22 per megawatt-hour fine means a $3 profit for a standard 3 megawatt wind turbine, and a $22,000 loss every hour for a gigawatt nuclear plant. 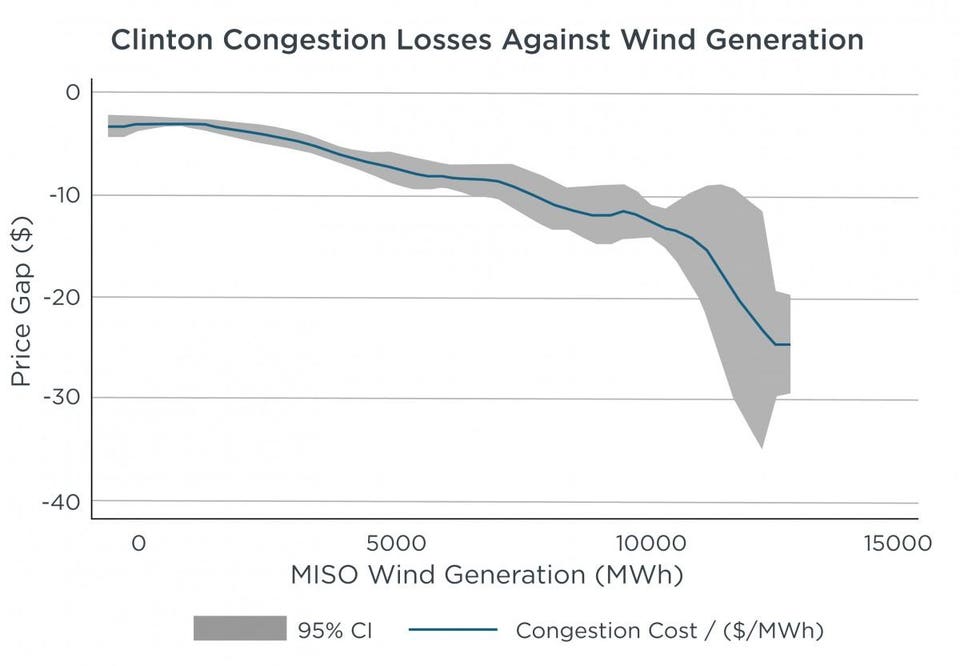 The Clinton plant is an example of what nuclear has to look forward to without transmission capacity to deliver wind power to market. In the chart above, I plot the congestion loss at Clinton against hourly wind generation in 2015 (controlling for demand). In other words, this is by how many dollars per megawatt-hour Clinton is earning below the broader Illinois market, and how it varies with the amount of wind being generated on the wider Midwest system. A future with increased wind generation is not a bright one for the Midwestern nuclear fleet.

Of course, transmission infrastructure is not free—but regulators should be deciding between those one-time costs remedying the cause of a $70 million shortfall per year at Clinton alone, or writing a check every year for the foreseeable future to paper over the real problem.