While the illegal trading of elephant ivory, rhino horns, and pangolin scales often grab headlines, thousands of species are traded every day, putting them at risk of extinction. For example, the large helmeted hornbill bird was commonly found in the wild in China and Indonesia in 2012. But three years later, it was close to extinction due to a sudden increase in demand for its ivory-like beak. The Convention on International Trade in Endangered Species of Wild Fauna and Flora (CITES) exists to protect these wildlife. By placing restrictions on international trade, CITES aims to prevent the overexploitation of animals and plants. While CITES is the policy body, the International Union for Conservation of Nature (IUCN) is recognized as the scientific authority for evaluating extinction risks and maintains a ‘Red List’ of potentially endangered species.

Through my research with David Wilcove from Princeton University, we’ve found that too often there are gaps between the scientific knowledge of extinction threats from international trade and the policy actions in protecting animals. This has led to hundreds of wildlife being in danger of extinction, as two-thirds of them wait close to or more than two decades to be protected. As international wildlife authorities prepare to gather in May, there are important opportunities to better sync up the scientific and policy communities and ensure that endangered wildlife receive the protection they need.

Classifying the threats and the degree of extinction risk is a challenge. David and I analyze 958 species on the Red List that are endangered by international trade. We find that trade restrictions are missing for 28% of the species. Apart from them, we fortunately discover that almost all of the most heavily harvested are banned from trade. However, 30% to 40% of the remaining, many of which are still highly harvested, are not protected. 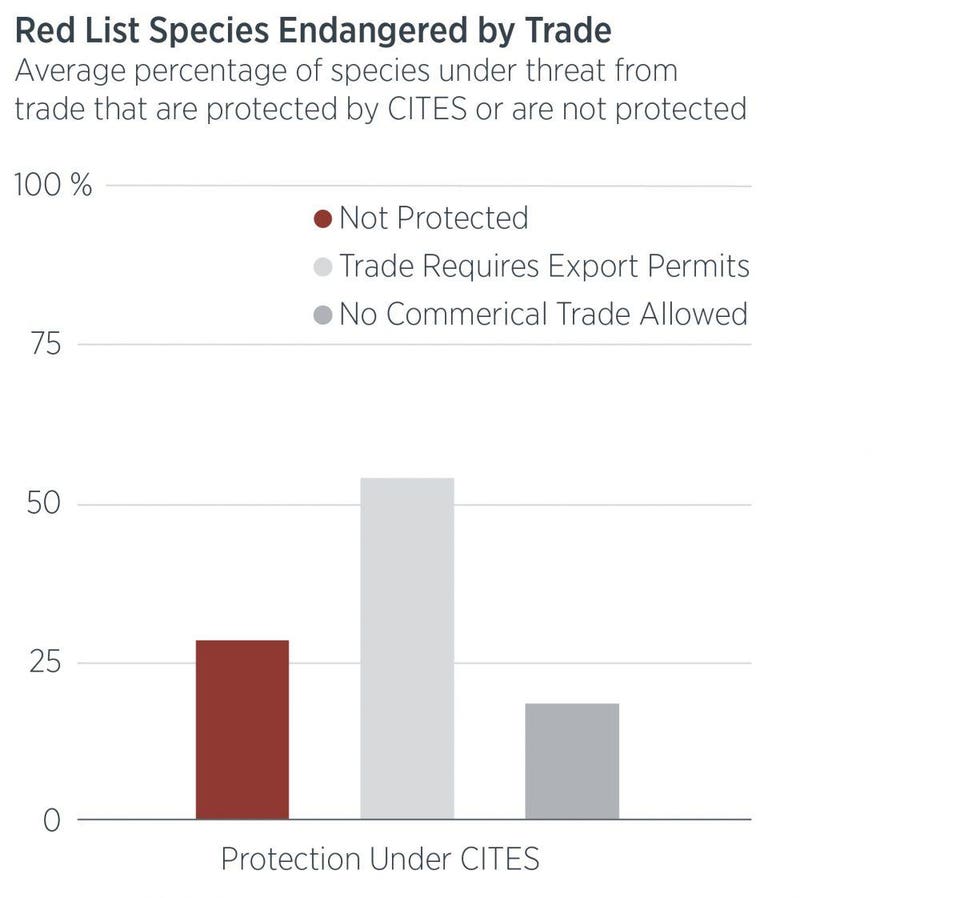 Whether species on the Red List are protected is one useful way to evaluate the overlap between the scientific and policy communities. Seeing how long it takes threatened species to become protected is also important. New trends in wildlife trade can develop quickly, with some species going from abundant to near extinction in even just a few years.

When we examine how long it takes internationally traded species to become protected under CITES, we find that of the 35% that are protected it took them on average about a decade after their Red List assessment to receive that protection. In some cases, animals waited nearly 20 years for protection. The 28% of species that are not yet protected under CITES have been waiting on average about 12 years to be listed, and in some cases more than 20 years. 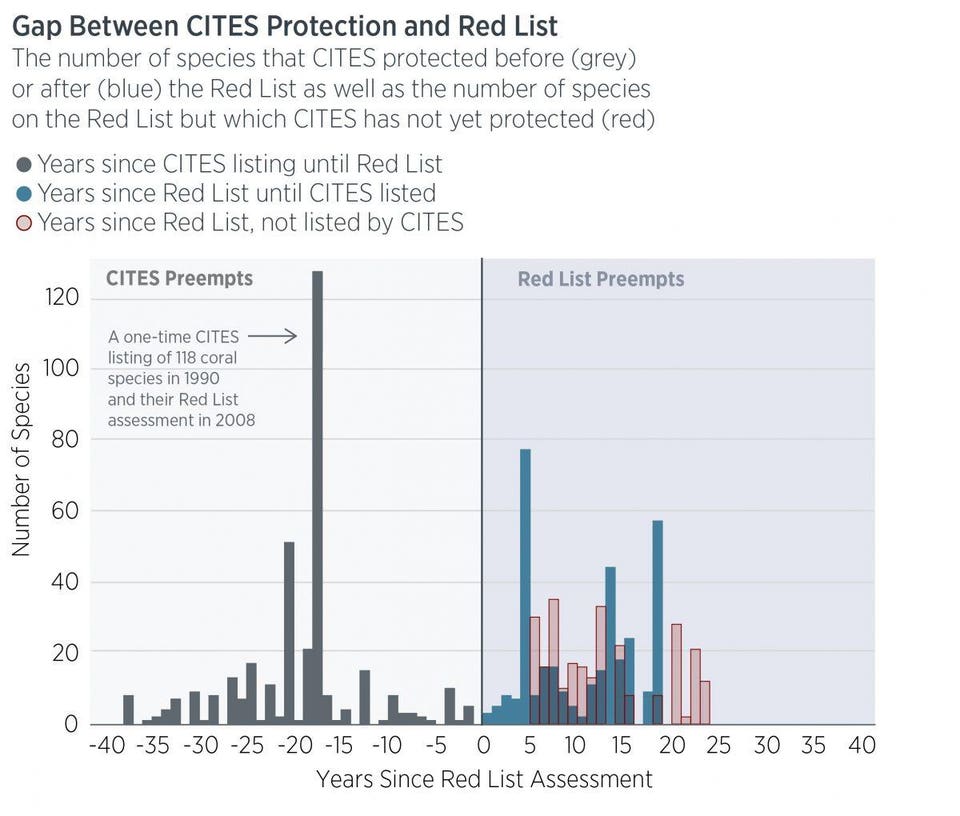 While policy has lagged behind the scientific communities’ assessments in the majority of cases, it’s also important to note that about 37% of the species we studied became protected before they were put on the Red List. In many of these cases, CITES was listing species that are similar to traded animals and plants in order to prevent mislabeling that circumvents the trade restrictions. But there are two other possible reasons why the policy process preceded scientific knowledge. First, the policy community may have access to information not yet available to the scientific community. And, second, the scientific staff at IUCN faces funding and staffing constraints that limit the number of assessments they can perform. Both reasons reflect challenges within the scientific community that need attention.

Given these gaps between the policy and scientific communities, it’s important that countries not wait for policy action to protect their endangered animals. The Red List can serve as an important guide, independently from the international coordination the treaty offers.

Additionally, it is imperative that international wildlife authorities at CITES begin to clear the backlog by proposing to protect the currently unprotected species. Eventually, the path toward doing so should be nearly automatic as authorities have within their power the ability to simply vote to protect any and all internationally traded species assessed as threatened and listed on the Red List.

Both CITES and the IUCN are tasked with difficult missions as they work to protect hundreds of thousands of species that are traded between borders every day all throughout the world. Both are working to sincerely meet their objectives. But, in measuring and tracking how well we implement the information in the Red List to global protection efforts, our assessment makes clear that there are ways in which we can improve how scientific knowledge is used to place restrictions on wildlife trade.

Truly using the best available science to quickly inform policy actions is critical in protecting our wildlife. That said, our assessment can also serve as a reminder that these gaps exist throughout the spectrum. There is a wealth of examples where policy actions move forward without scientific underpinning. Allowing the two communities to better work hand-in-hand would surely improve the effectiveness of our policies nationally and across the globe.

Areas of Focus: Environment
Definition
Environment
Producing and using energy damages people’s health and the environment. EPIC research is quantifying the social costs of energy choices and uncovering policies that help protect health while facilitating growth.
More on this Areas of Focus / Research Theme
, Conservation Economics
Definition
Conservation Economics
Human society profoundly shapes – and is shaped by – the natural world. EPIC research is helping to identify the costs and benefits of preserving natural ecosystems.
More on this Areas of Focus / Research Topic
Related...

Pollution in Beijing is Down by Half Since the Last Olympics