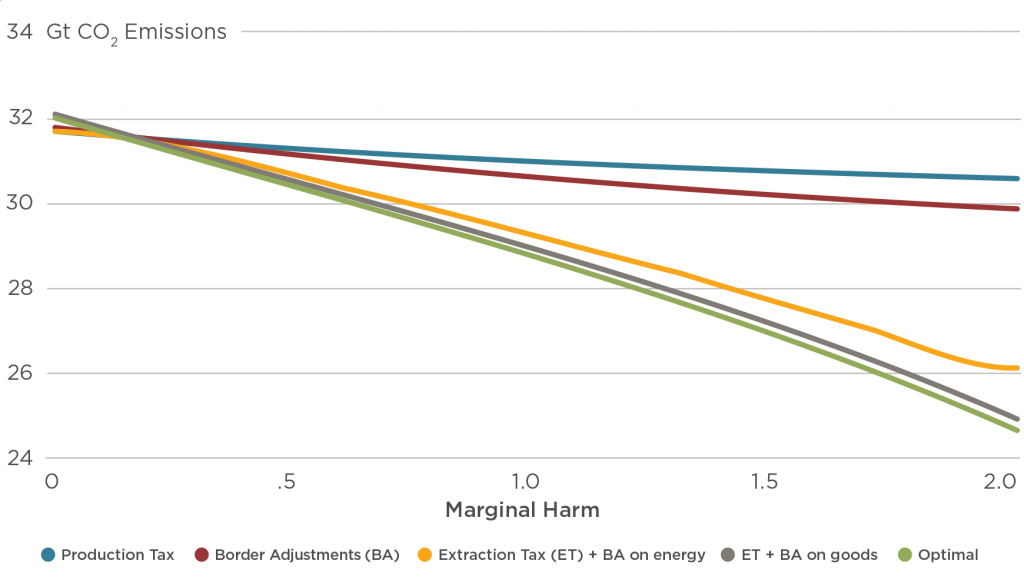 When only a subset of countries restrict emissions, energy-intensive industries—and their emissions—may move offshore to countries with few or no restrictions, a phenomenon known as “leakage.” Border tax adjustments force other countries to pay a tax on goods imported in and a rebate for exported goods. In this way, consumers often don’t care where the goods are made as long as the price is competitive, and producers can sell goods to other countries and still be on a level playing field.

Border adjustments (red line) don’t just keep producers from leaving—leaving jobs behind—they also reduce emissions more than a straight carbon price (blue line) because they force reductions across borders. The European Union, having started its emissions trading scheme more than a decade ago, is now considering border tax adjustments for these reasons. However, border adjustments are difficult to impose and enforce and may be considered an illegal trade barrier.

With this in mind, UChicago Law School’s David Weisbach, along with Yale University’s Samuel Kortum, propose a more effective alternative for policymakers interested in implementing a carbon price. Policymakers could combine an extraction tax with a partial border adjustment (e.g., at a lower rate than the extraction tax) on energy products (yellow line)—effectively combining an extraction tax and a production tax (a tax on supply and a tax on demand). Doing so pushes the price of energy in opposite directions, moderating the effects on the price of energy and minimizing leakage.

Policymakers could also combine an extraction tax with a partial border tax on both energy and goods, effectively creating a combination of an extraction tax and a consumption tax and similarly moderating the effects on energy prices (grey line). This approach, however, would be more difficult to impost than a tax on energy alone.

To go one step further, Weisbach and Kortum say countries using this approach should seek to expand, rather than just maintain, its exports so as to expand the carbon price to other countries and allow for greater emissions reductions. It should do so through a policy of tax rebates and if necessary, subsidies, for exports (green line).