Seven years ago this week, the U.S. offshore oil and gas industry experienced the worst failure in its history. On April 20, 2010, while drilling an exploratory well off the coast of Louisiana, the Deepwater Horizon drilling rig suffered a catastrophic blowout, leading to several crippling explosions and an uncontainable fire that sank the ship. The accident severed the rig’s connection to the sea floor, and the blowout preventer—a critical piece of last-resort safety equipment—failed, allowing oil to flow rapidly into the Gulf of Mexico. Nearly 5 million barrels of crude oil ultimately leaked from the damaged well.

The Obama Administration—which in the months prior indicated that it was considering expanding development—responded to the spill with a slew of regulatory actions. And, industry advocates responded in kind with claims that the steps were a dramatic overreaction and that the stricter regulations would cost thousands of jobs and cripple the U.S. offshore industry.

Fast forward to today and the same types of claims are now rampant in political discourse. The idea that increased regulation in pursuit of better environmental outcomes is anti-growth has led to questions over the appropriate role and impact of agencies like the EPA. But, seven years after the spill, offshore oil operations provide a pretty compelling argument that environmental regulations don’t have to hold back growth.

It’s true that there were initial impacts from the actions that took place immediately after Deepwater Horizon. After placing a moratorium on new drilling permits, the number of rigs drilling for oil in the Gulf of Mexico plunged from roughly 30 in April to as low as four in September, and did not begin to recover until mid-2011 after the moratorium was fully lifted. 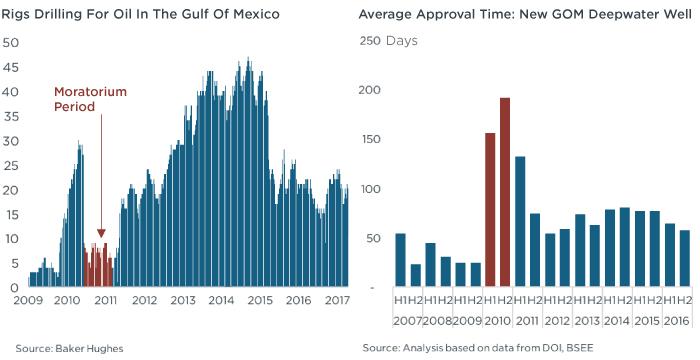 Meanwhile, applications for permits to drill new deepwater wells in the Gulf that were submitted in 2010 took more than 150 days on average to receive approval, a sharp increase from the typical range of 25 to 30 days in the years just prior to 2010. More importantly, the Department of Interior introduced a series of new safety and performance standards for offshore operations and equipment, particularly for blowout preventers, and made clear that applications would receive greater scrutiny going forward. This new review and approval process led to consistently longer approval wait times in the years following the accident. Between 2012 and 2016, Gulf deepwater operators waited 60 to 75 days to receive approval for new wells.

Long and arduous permit approval processes are among industry’s most commonly cited problems with environmental and safety regulation. They can add to business costs, which they argue reduces investment, economic activity, and output.

But we now know that, at least in the case of offshore drilling, increased regulation does not have to equal reduced production. Earlier this week, the Energy Informational Administration (EIA) released data showing that the industry is far from entering some kind of terminal decline or even plateauing. Crude oil production in the Gulf of Mexico hit a record 1.6 million barrels per day (mbd) in 2016. What’s more, despite low oil prices, EIA sees Gulf production topping 1.7 mbd this year and surging to 1.9 mbd in 2018. Even more instructive than record output is the composition of that output: production from deep and ultra-deep water projects accounted for an incredible 87 percent of Gulf output last year. Projects in more than 5,000 feet of water, the same depth Deepwater Horizon was drilling—produced almost half of all Gulf oil.

With these data in hand, it is hard to argue that the industry suffered a significant setback from tighter regulation. Instead, it has flourished. Moreover, despite claims that smaller companies would find it especially difficult to meet some of the new provisions, federal data reveals a number of independent companies still drilling in the deepwater Gulf today. Those that have reduced activity in recent years have cited lower oil prices and the attractiveness of shale plays, not tougher regulation. 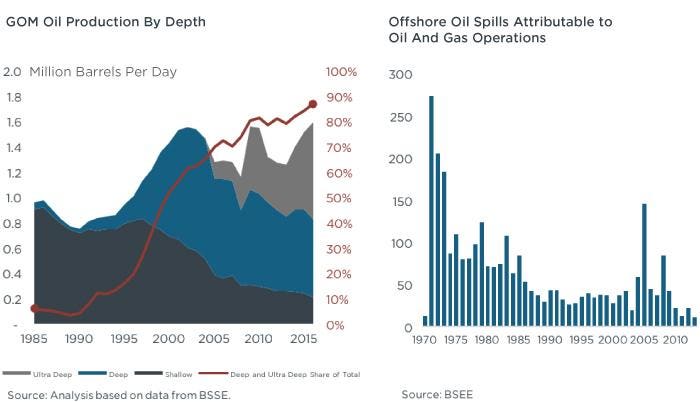 If regulation did not stifle production, did it make the industry safer for both workers and the environment? This is a complex question. Serious problems on offshore rigs are exceedingly rare, and many of the rules put in place by the Obama Administration in 2010 and 2011 (and updated in 2016) were designed to mitigate the risks from low-probability, high-risk catastrophic blow outs. While no such incident has occurred since 2010, some have argued that the risks are still high.

Nonetheless, the latest data on offshore safety does suggest some improvement after 2010. The total number of offshore spills attributable to oil and gas operations fell to the lowest level since 1970 in 2011 and even lower in 2013, the last year for which data is available and a year of significant drilling activity. Similarly, the number of times operators lost control of a well, experienced a fire, or logged many other types of accidents has been trending down in recent years.

Seven years since Deepwater Horizon, offshore oil production is thriving despite stronger regulation—a powerful indication that the new rules pass cost-benefit analysis, the foundation for good regulatory policy. This case study points to an obvious conclusion that is supported by a wide range of economics research: It is possible to have stronger environmental regulations that protect the public interest, while also growing our industries and our economy. It’s a story that echoes the remarkable achievements of the U.S. oil industry as a whole over the past decade, and one that should make us skeptical of claims that policymakers need to reduce or eliminate industry oversight to drive production growth.

View on Forbes…
Areas of Focus: Energy Markets
Definition
Energy Markets
Well-functioning markets are essential for providing access to reliable, affordable energy. EPIC research is uncovering the policies, prices and information needed to help energy markets work efficiently.
More on this Research Theme
, Fossil Fuels
Definition
Fossil Fuels
Under current policies, fossil fuels will play an important role in the energy system for the foreseeable future. EPIC research is exploring the costs and benefits of these fuels as...
More on this Areas of Focus / Research Topic