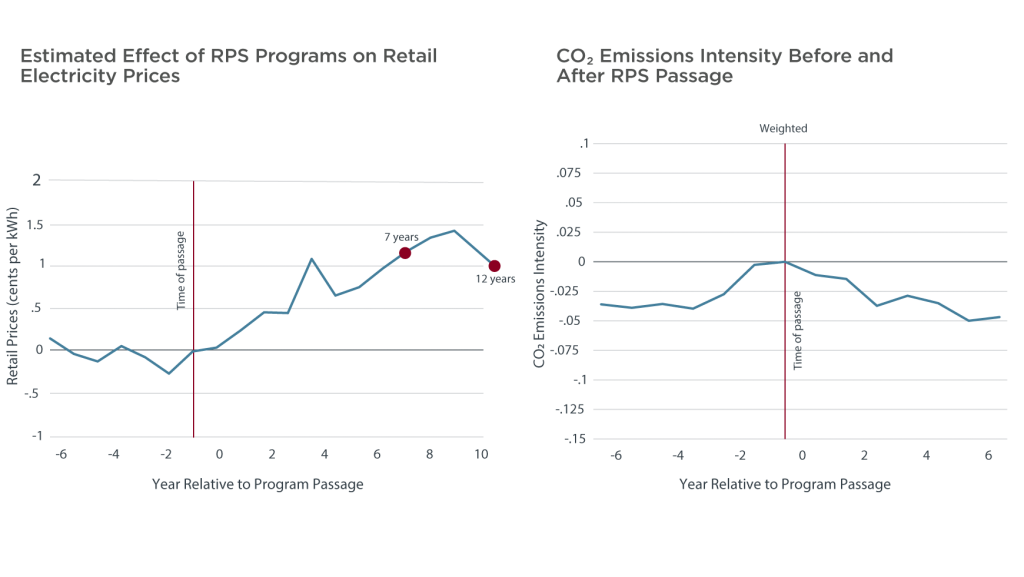 More than two dozen states have implemented renewable portfolio standards (RPS) intended to increase the share of electricity generated by renewables. RPS programs, which require that a certain percentage of the state’s electricity come from renewable sources, currently cover 64 percent of the electricity sold in the United States. But how do they stack up as a climate policy?

EPIC Director Michael Greenstone and postdoctoral scholar Ishan Nath compared states with and without RPS policies and found that the programs significantly increased electricity prices in the states that had them, with prices rising by 11 percent seven years after the policy became law and 17 percent twelve years afterwards—driven largely by the cost of integrating renewables into electricity grids. Cumulatively, consumers in the 29 states studied paid $125.2 billion more for electricity than they would have in the absence of the policy seven years after passage.

While RPS programs do increase renewable generation—by 1.8 percentage points seven years after passage and 4.2 percentage points twelve years after—and in turn reduce carbon emissions, they do so at a high cost. The states with an RPS policy avoided 95 to 175 million tons of carbon emissions seven years after the start of the programs, driven by a decrease in the carbon intensity of electricity supply. But, the cost of reducing emissions was at a minimum $130 per ton of CO2 and as much as $460 per ton. That’s several times higher than conventional estimates of the benefits of avoiding a metric ton of emissions ($50 per ton under the Obama administration), and much higher than the price of a ton of CO2 under other programs. Carbon is priced at about $5 per ton under the northeast’s Regional Greenhouse Gas Initiative (RGGI) and $15 per ton in California’s cap-and-trade system.