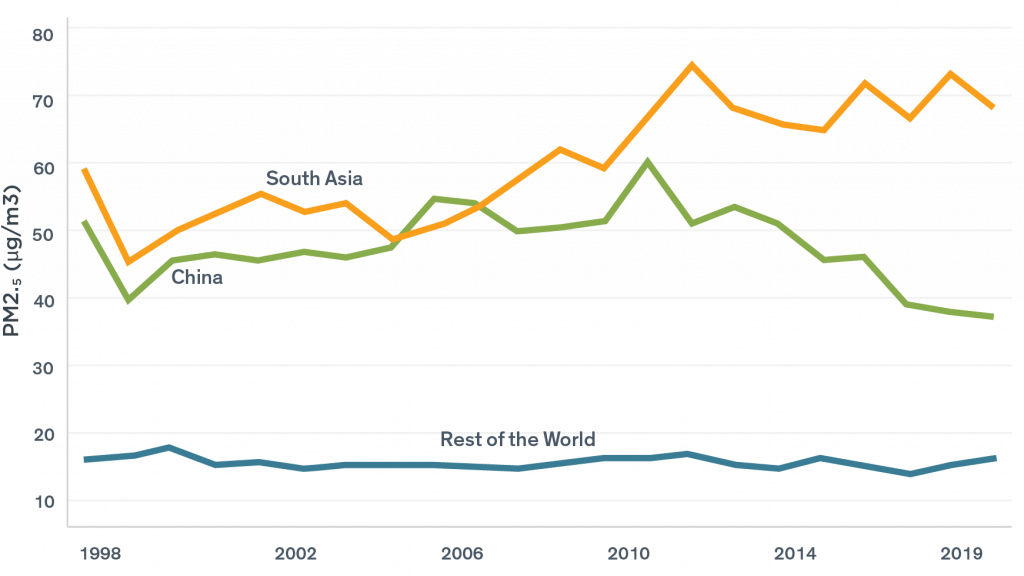 Over the last nearly two years, Covid-19 lockdowns brought blue skies to the most polluted regions of the globe, while this summer wildfires exacerbated by a drier and hotter climate sent smoke to the normally clean skies of cities thousands of miles away. The conflicting events offer two visions of the future. The difference between those futures lies in policies to reduce fossil fuels that contribute both to local air pollution and climate change.

China is an important model showing that policy can produce sharp reductions in pollution in short order. Since the country began its “war against pollution” in 2014, China has reduced its particulate pollution by 29 percent—making up three-quarters of the reductions in air pollution across the world. Data released this year from the Air Quality Life Index (AQLI) shows this reduction in pollution has added about 1.5 years onto the lives of the Chinese people, assuming these reductions are sustained. To put China’s success into context, it took several decades and recessions for the United States and Europe to achieve the same pollution reductions that China was able to accomplish in 6 years.

Notably, however, while most of the world has seen a stable amount of pollution over the last two decades, pollution in South Asia has significantly increased. Now home to the most polluted regions of the world, South Asia has seen its pollution rise 35 percent since the turn of the century, making up 38 percent of the world’s increase in pollution during that time. But, if South Asia implemented policies to reduce its pollution to the World Health Organization’s (WHO) guideline, its residents could live close to 6 years longer. As it stands now, South Asia accounts for 60 percent of the person-years that are expected to be lost globally due to pollution levels exceeding the WHO guideline.

Fortunately, more and more people in these countries are recognizing the severity of the problem, and governments are beginning to respond. In 2019, for example, the Government of India declared a “war on pollution,” mirroring China’s action 6 years earlier.