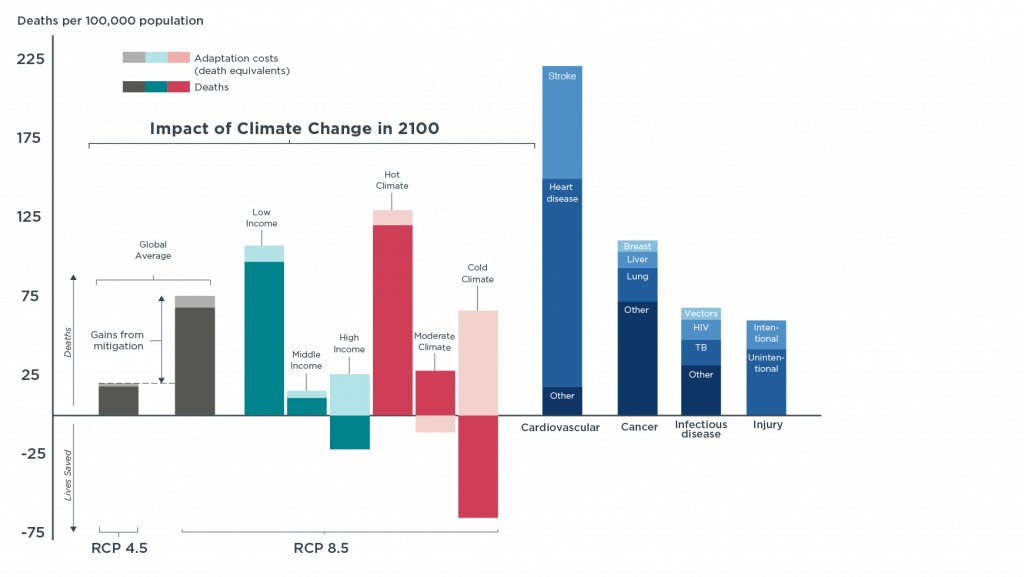 This summer, the world experienced record hot temperatures: June continued a 2020 streak, ranking among the warmest months in history. A weather station in Death Valley, California, clocked a scorching 53°C (128°F) in July, one of the hottest temperatures ever observed on Earth. Officials from Delhi to Tokyo to Baghdad, cities where past heat waves have claimed hundreds of lives, are bracing for dangerously hot periods. And yet, this is nothing new. Year after year more heat records are broken all over the world.

Temperature’s toll on public health, particularly the toll from extreme heat, is likely to be one of the dominant costs of climate change. And, because today’s emissions will stay in the atmosphere for hundreds of years, knowing the damages they will cause will be essential to taking the action we need to prepare for future risks. So, what impact will temperature have on public health, and how much will it cost? A working paper from the Climate Impact Lab, which has developed a new approach that uses real-world data to understand the impacts of climate change, takes on these questions. The study finds that in a world with continued high fossil-fuel emissions, warmer temperatures will rank among the world’s most significant public health threats by the end of the century.

To measure the impact of climate-driven temperature changes on mortality risk, the researchers compiled the largest sub-national vital statistics database in the world, detailing 399 million deaths across 41 countries accounting for 55 percent of the global population. They divided the world into more than 24,000 regions that are each about the size of a U.S. county.

The researchers discovered that continuing a high emissions trajectory (RCP8.5) increases average global temperatures by around 4.8°C (8.6°F) relative to pre-industrial temperatures, raising global mortality risk by 85 deaths per 100,000 people by 2100. The mortality consequences will be largest in places that today are hot and/or poor. In the United States, the mortality risk will be 10 deaths per 100,000, about on par with the current fatality rate from auto accidents in the United States. Many areas will experience mortality risks that are significantly higher and on par with the current U.S. mortality rate for diabetes and for the flu and pneumonia.

However, the level of emissions, is not a law of physics—it is a reflection of policy choices. Bringing global emissions down to moderate levels (RCP4.5)—not even as low as the Paris Agreement’s long-term targets—would reduce the attendant mortality risk by 84 percent compared to the high emissions pathway. Under this moderate emissions scenario, climate-induced temperature changes are projected to be responsible for 14 additional deaths per 100,000 globally at the end of the century. In the United States, that risk would be 1.3 deaths per 100,000, eliminating almost all of the mortality risk.

Donald Trump Should Know: This Is What Climate Change Costs Us