Access to Electricity and Transmission and Distribution (T&D) Losses 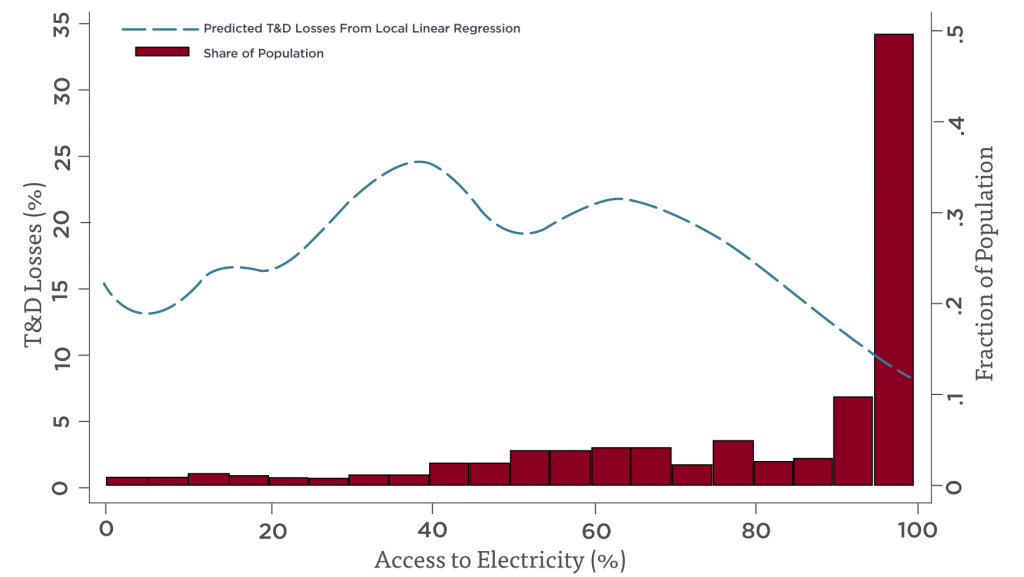 Each point represents one country and year, for all 142 countries and years from 1990-2014 for which data are available. The local linear regression and histogram of access to electricity are both weighted by country population. T&D losses are defined as the percent of electricity generated by all power sources (in kWh) that is not billed to any consumer. Access data was originally gathered from household surveys and T&D data are originally from national energy agencies.

Source: Electrifying India May Require Convincing People Power Is Something Worth Paying For, Forbes, December 2019

In 1879, the year Thomas Edison invented a workable light bulb, the population of the world was 1.2 billion, all living without electric lighting. One hundred and forty years later, electricity remains inaccessible for a little more than 800 million people. For hundreds of millions more, flicking a light switch is a roll of the dice—sometimes the light turns on, but all too often power outages mean that candles and kerosene lamps need to be pressed into service.

So why do so many of the rural poor in large parts of Asia and Africa still live without power? Contrary to what one might think, it is not because of a lack of money to generate enough electricity. India, for example, not only has more than enough generation capacity to meet current demand, in 2018-2019 only half of it was used.

Over the last eight years, EPIC Director Michael Greenstone, EPIC South Asia Director Anant Sudarshan and their colleagues have worked on electricity access and supply in India. They posit that the cause lies in a deep-rooted social norm that electricity is a right and not a private good that must be paid for. As a result of this social norm, a vicious cycle is created. Customers—even the relatively rich—do not pay their bills. In turn, the state loses money for every unit of power that is consumed and to avoid bankruptcy has no choice but to limit electricity. The resulting low-quality supply makes consumers even less willing to pay.To dig into the situation globally, the researchers collected data on electricity prices and utility losses from around the world and found a large number of low-income countries have transmission and distribution losses far above the norm in the developed world. The average utility in a poor country makes 46 cents per dollar of input. In the developed world, things look very different and losses fall below 10 percent, largely for technical reasons alone, not theft or non-payment. Prices are higher than marginal costs for the average consumer, losses are low, and thus selling power is profitable in developed countries.

This dynamic shows up in a truly striking relationship between losses and supply from data from countries around the world. As the chart shows, as countries connect more and more households to the grid, losses steadily rise. Then, a tipping point occurs after which there is a move towards high quality supply, universal access and low losses. The challenge before developing countries is to cross over this tipping point, and to find a way to expand access without going bankrupt. That is where breaking the social norm that electricity is a right and not a private good, must come in. It also underscores the need for innovation and experimentation to improve revenue collection, not just to make utilities more money but fundamentally to allow the poor access to reliable electricity to the poor.