Back in early April, I wrote a piece exploring U.S. fuel economy performance over the past few years. Specifically, I compared recent trends in real-world efficiency to what the federal government expected would happen back in 2010 and 2011 when EPA and the Department of Transportation wrote historic rules requiring significant reductions in fuel consumption and GHG emissions from new passenger vehicles sold in the United States between 2012 and 2025.

This is important for a few reasons. First, conditions in energy and automotive markets have diverged substantially from what most forecasters were projecting at the time the agencies wrote their rules. From plunging fuel prices to soaring SUV sales, several factors have emerged that could plausibly impact fuel economy performance. 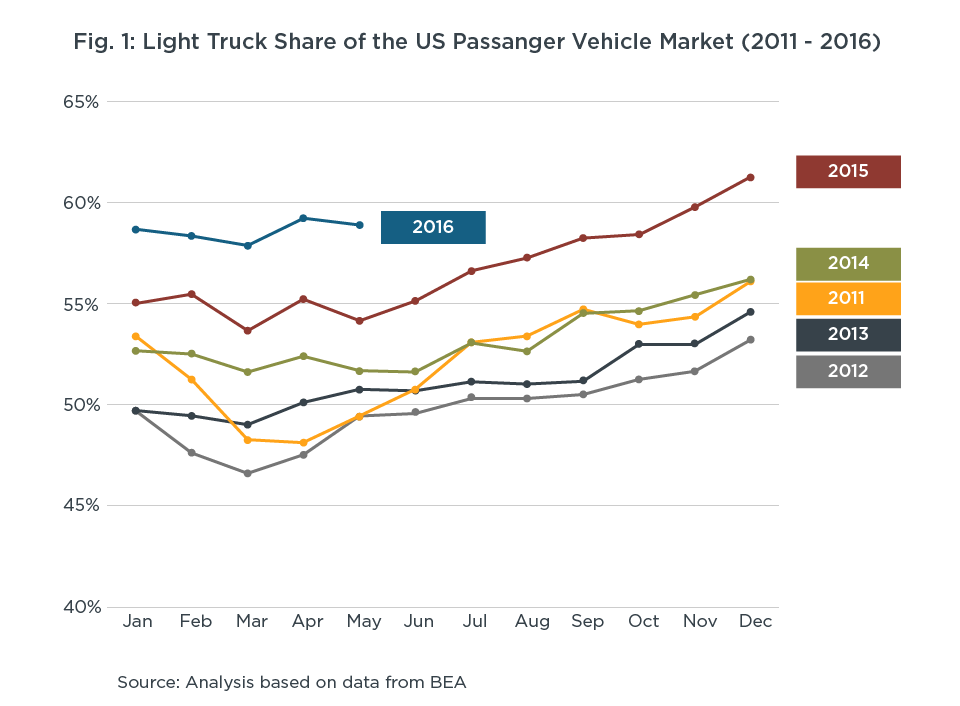 A second reason this is a critical issue is that greenhouse gas emissions in the transportation sector are rising. In fact, based on preliminary data, transportation eclipsed the power sector as the single largest source of U.S. carbon dioxide emissions in the 12 months through February of 2016. To be clear, this shift is the result of trends that have little to do with fuel economy to date. Power sector emissions are plummeting as natural gas and renewables displace coal-fired power generation. Meanwhile, transportation sector emissions are rising largely due to the massive increase in driving taking place in the United States amid the lowest gasoline prices in a decade.

That said, fuel economy standards are the key pillar in U.S. policy for dealing with fuel consumption and GHG emissions in transportation, so it is important to understand whether they are accomplishing the goals that were envisioned for them back in 2010 and 2011. This is especially true given the fact that the United States has now made additional commitments to reduce greenhouse gas emissions as part of the Paris Climate Agreement.

In my original post, I argued that fuel economy performance had run consistently behind expectations thus far and that, in the aggregate, the 2012-2016 phase of the fuel economy program was likely to accomplish roughly two-thirds of its expected fuel savings—a significant achievement, but obviously less than desired.

However, several insightful readers pointed out something I had overlooked. A portion of the shortfall in achieved versus expected fuel economy performance was explained by something the agencies had actually planned for—namely, the availability of flex-fuel vehicle (FFV) credits as a cheap compliance mechanism for automakers. These credits, which were intended to support broader use of ethanol as a transportation fuel, give automakers a bonus for selling cars and trucks that can run on high blends of ethanol (E85) even though they actually do not offer efficiency improvements compared to their gasoline versions (and even though we know they rarely run on E85).

On average, the credits reduce the agencies’ headline projected performance numbers by about 1.0 mpg each year between 2012 and 2016 if they are fully used—a pretty significant tally. Given the existence of these credits, a more conservative comparison to make is between real-world fuel economy performance and the projection made in the rule that included full automaker use of FFV credits.

As figure 2 shows, making the comparison this way reveals a much more intuitive picture. Real-world fuel economy performance was very much in line with what the agencies expected in the early years of the rule—model years 2012 through 2014—a period of consistently high oil and gasoline prices. And in fact this has been well documented by researchers at the University of Michigan Transportation Research Institute (UMTRI). 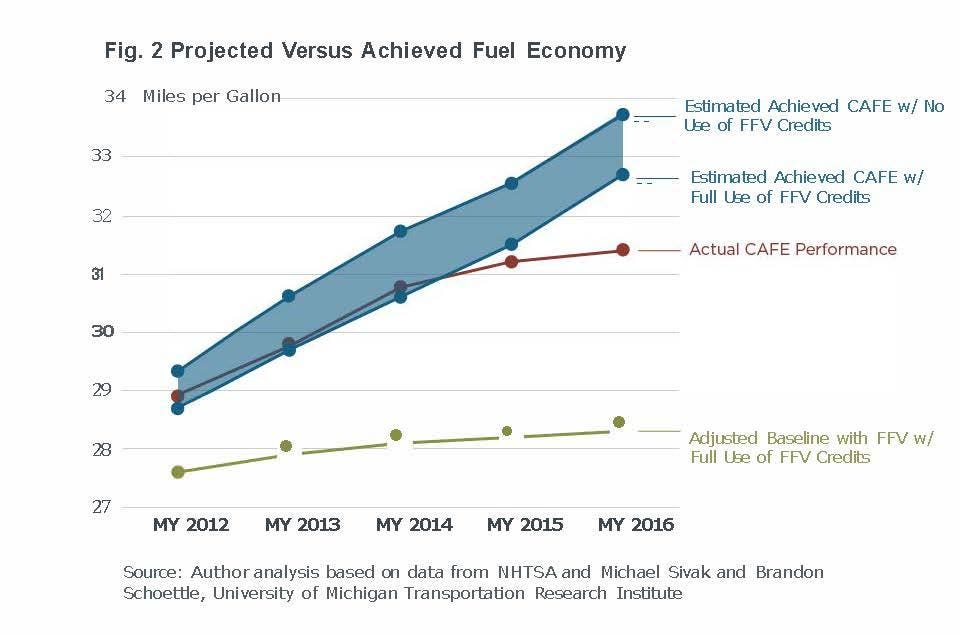 But things really start to change in model year 2015, which coincides with the steep drop in oil prices that commenced in November of 2014. At that point, real world performance began to depart from expectations. The gap was small at first, but through eight months of model year 2016, real world fuel economy performance is running 1.3 mpg behind where the agencies hoped it would be at this point. To put that number in perspective, it is equal to a full year of expected improvement. At this point, it looks like the program will capture only about 70% of estimated savings this year. 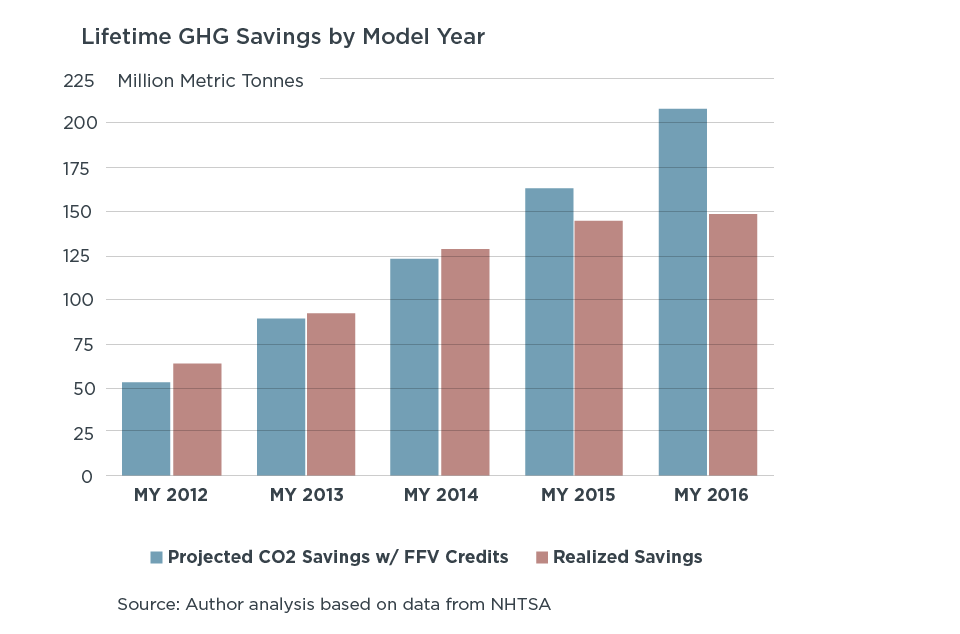 This trend will be important to watch going forward. If world oil markets have entered a period of sustained oversupply and relatively low prices, it is likely that the gap between expected and actual fuel economy performance will widen, undermining policymakers’ energy security and climate goals. Indeed, as UMTRI reports, fuel economy performance was originally anticipated to jump all the way to 34.8 mpg next year. That looks like a herculean task at this point.

On the other hand, a return to sustained higher oil prices—an increasingly realistic prospect given the potent combination of geopolitics, deferred upstream investment and soaring oil demand—could have the opposite impact.

The country is certainly better off with fuel economy standards in place. The question for policymakers now and when the current standards expire in 2025 will be whether there are ways to design a system that is more robust in the face of volatile oil prices and is capable of more comprehensively reducing emissions in the transportation sector.