World oil prices recently surpassed $75 per barrel for the first time since 2014. While a number of factors have contributed to the increase, including tighter physical market conditions, there is little doubt that at least two geopolitical crises are weighing on markets. First, the Trump administration’s withdrawal from the Iran nuclear agreement will crimp Iran’s oil production, though it remains to be seen by how much and when. Second, and perhaps more important, the deteriorating economic and political situation in Venezuela has led to a collapse in oil production, with the worst possibly yet to come.

Should the worst-case scenarios prevail, additional supply will be needed to avoid a substantial price spike. Where might new supply come from? One set of candidates are the nations of Russia and Saudi Arabia, which have been discussing increasing production and are believed to have the spare capacity to do it. But what about the United States? To what extent can U.S. oil producers play the role of swing producer?

Industry observers and academics have long noted that the price-responsiveness of U.S. oil supply—along with supply from other countries where extraction is dominated by private rather than nationalized oil firms—is minimal in the short-run. My colleagues Soren Anderson, Steve Salant and I show in a new analysis that these concerns are well-founded.

Using detailed data from Texas, we identify a set of wells that were producing oil in 1990 and then follow these wells all the way to the end of our sample in 2007. We find that existing wells do not respond to prices. Instead, production from the wells declines smoothly over time. This behavior is rather remarkable given the tremendous price swings that occurred over that period—a brief but substantial price spike during the first Gulf War in 1990 to 1991, a price collapse to almost $10 per barrel in 1999, and a price run up to over $100 per barrel before the 2008 Great Recession. Our results are echoed by another recent analysis that uses data through 2014, which includes the shale era.

Why don’t existing wells respond to prices? While producers have a strong incentive to produce more from a well when prices go up, and less when prices go down, their ability to follow-through is constrained by the capacity of the well and the underground pressure that pushes oil through the rock, to the wellbore and up to the surface. The reservoir and the well will only yield oil up to a maximum possible flowrate, so that when the oil price goes up, producers simply cannot squeeze more oil out of their existing wells.

As a result, U.S. oil producers are not able to pump large volumes of new production within a few months of an oil price shock. Private oil companies—unlike the state-controlled companies that run the show in Russia and Saudi Arabia—do not sit on idle production capacity that can be turned on within a few days or weeks. 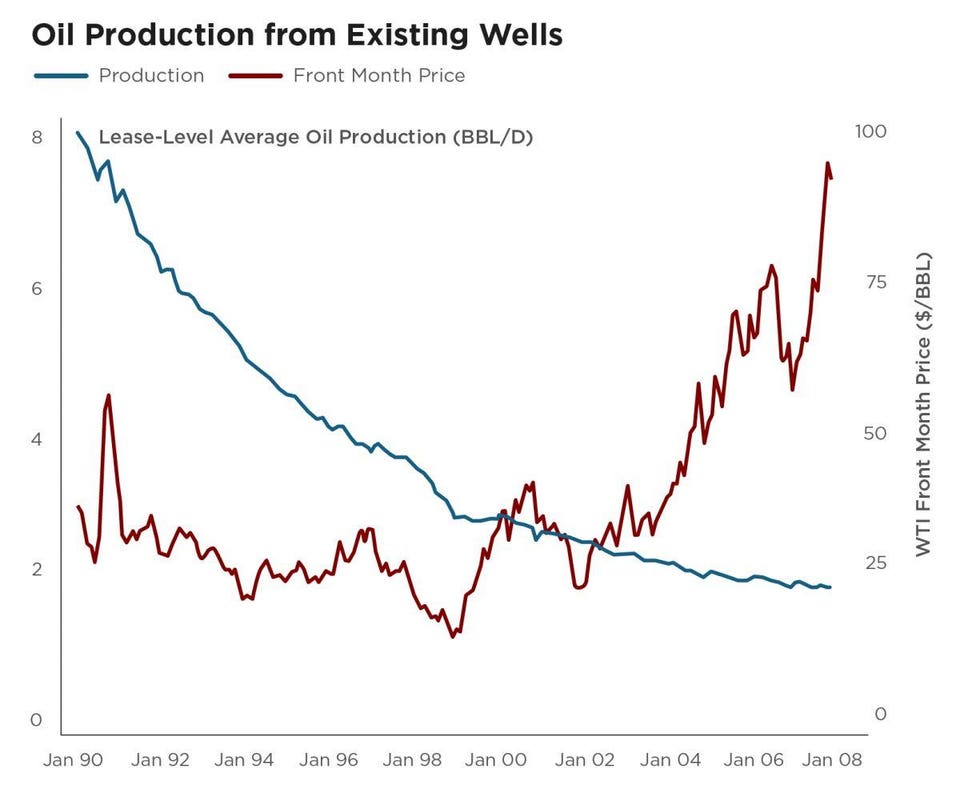 Instead, to get more oil out of the ground, producers need to drill new wells or recomplete old ones. Doing so requires not just capital but also time. When we study the drilling of new wells, we see that drilling activity follows oil prices very closely, albeit with a lag of a few months. We see similar results when we look at recompletions. 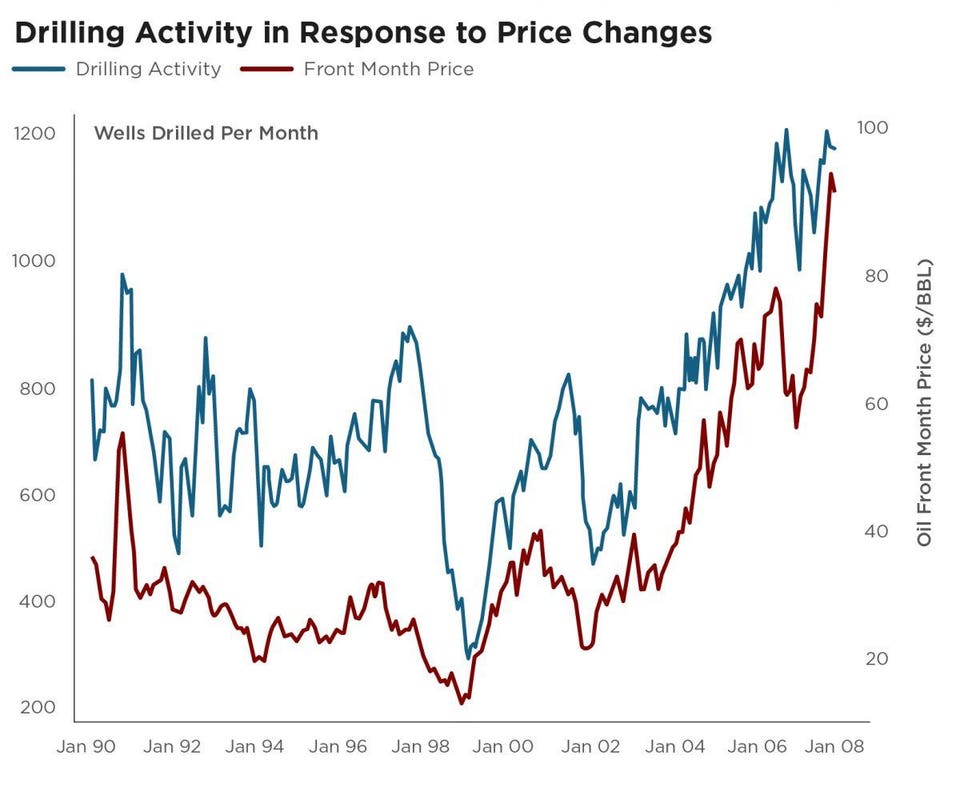 The response of U.S. oil production to oil price shocks therefore depends on how quickly investments in new well capacity can be made. One virtue of the shale boom, as I have argued in a past Forbes piece, is the speed and scale with which new drilling and completions can boost production. Alternatives such as deepwater or remote plays require years of exploration and facilities construction, and conventional onshore resources are now so depleted that they lack scale. In contrast, shale wells can be drilled quickly (within a few months of the price shock) and can be drilled at scale because there are a lot of reserves left to tap. The large, rapid deployment of shale investment is the primary reason why U.S. oil production has been increasing this past year.  In the twelve months leading to February, 2018 (the most recent month for which data are available), U.S. oil production increased by 13% as crude oil prices rose, reaching 10.26 million barrels per day. Nearly all of this increase came from new shale drilling and completions, and in particular in the Permian Basin in West Texas.

A key question is how much quicker U.S. oil drilling, and then production, could ramp up in the event of a major price spike. If continued strong demand growth or geopolitical events drive the oil price above $100 per barrel, could U.S. oil producers ramp up production even quicker than what we’ve observed thus far?

There are at least two obstacles to quickly ramping up production from new wells. First, such growth rates would strain the supply of workers, equipment, and supplies needed to drill and frack new wells. For example, even at the current rate of production growth, it has grown increasingly difficult to supply frack sand to the Permian. Second, infrastructure investments will be required to move the oil from where it is produced to the U.S. coasts, where it can be refined or exported abroad. Already, shortfalls in both pipeline and rail transportation capacity out of the Permian have caused Permian crude oil spot prices to fall by as much as $10 per barrel below the oil price on the Gulf Coast.

The extent to which the industry could rapidly overcome these obstacles in the event of a serious oil price spike is something we simply don’t know. And, we won’t know until such an event actually happens.

Areas of Focus: Energy Markets
Definition
Energy Markets
Well-functioning markets are essential for providing access to reliable, affordable energy. EPIC research is uncovering the policies, prices and information needed to help energy markets work efficiently.
More on this Research Theme
, Fossil Fuels
Definition
Fossil Fuels
Under current policies, fossil fuels will play an important role in the energy system for the foreseeable future. EPIC research is exploring the costs and benefits of these fuels as...
More on this Areas of Focus / Research Topic
Related...