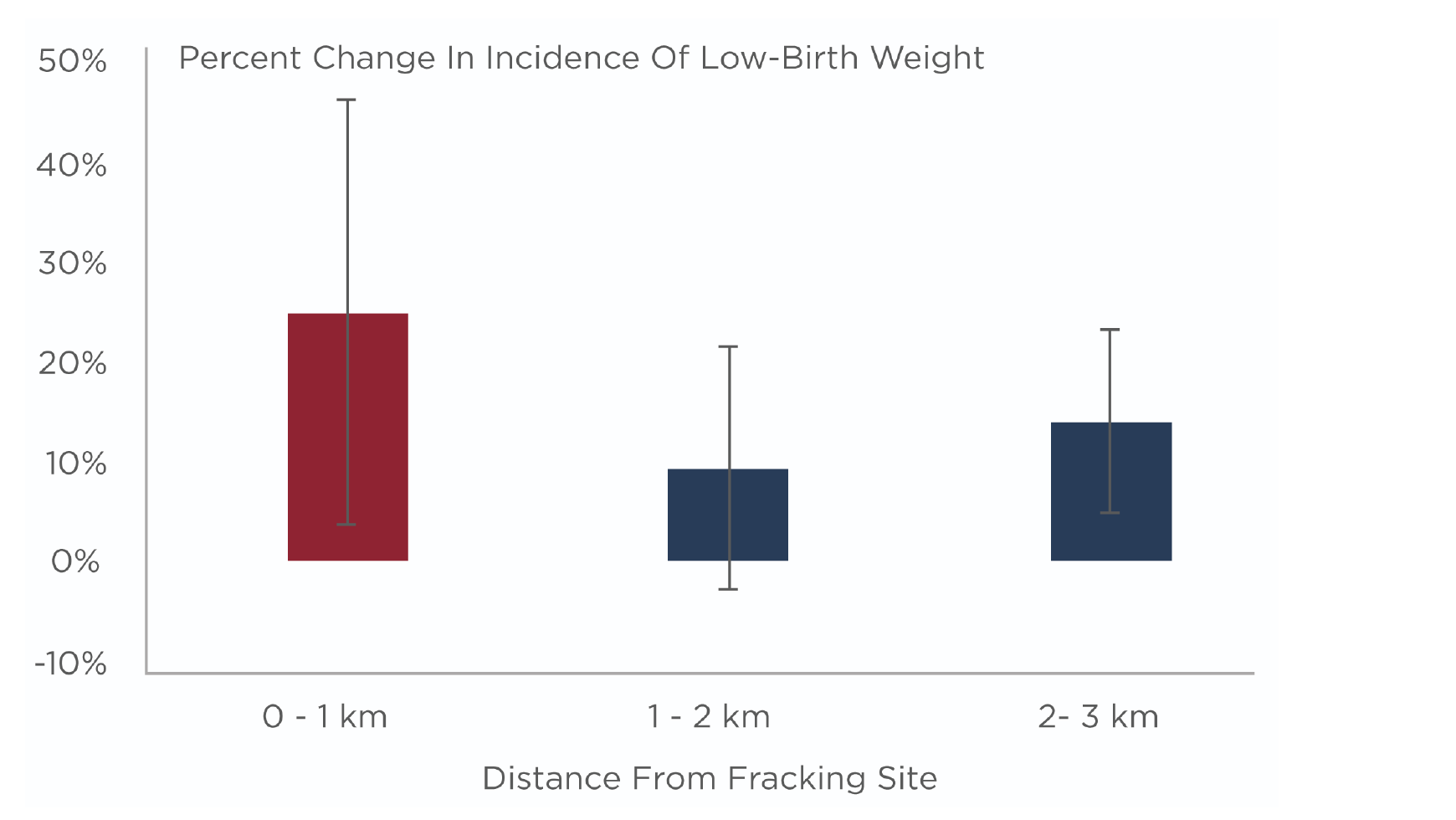 Hydraulic fracturing, or fracking, is perhaps the most important discovery to the energy system in the last half century. As a result of its discovery, U.S. production of oil and natural gas has increased dramatically. This has led to abruptly lower energy prices, stronger energy security and even lower carbon dioxide and air pollution emissions by displacing coal in electricity generation. That is certainly good news for our climate, and our health—with large reductions in air pollution dispersed around the country.  Plus, natural gas’s cheap price tag has meant more money in the pockets of American families and businesses. But, our continued access to these benefits depends on local communities allowing fracking. Communities have reached very different conclusions about local benefits and costs with many places banning it and others embracing it.

A primary concern has been whether hydraulic fracturing causes local health problems. EPIC Director Michael Greenstone and his colleagues  Janet Currie (Princeton University) and Katherine Meckel (UCLA) dug into data from more than 1.1 million births in Pennsylvania and found that infants born to mothers living up to about 2 miles from a hydraulic fracturing site suffer from poorer health. The largest impacts were to babies born within about a half mile of a site, with those babies being 25 percent more likely to be born at a low birth weight (i.e., less than 5.5 lbs)—leaving them with a greater risk of infant mortality, ADHD, asthma, lower test scores, lower schooling attainment, and lower earnings.

The risk of giving birth to an infant classified as low birth weight decreases the further the mother lives from a site, the study finds. Infants born to mothers living about a half to 2 miles from a site also experienced increases in the probability of low birth weight but the effect is smaller—about a half to a third of the effect within about a half mile.  The results also open the door for future research to examine whether fracking is associated with health consequences at other ages.

In contrast, the study found no evidence of impacts on infant health among babies born to mothers living further than about 2 miles from a fracking site. These results suggest that hydraulic fracturing does have an impact on infant health, but only at a highly localized level. Out of the nearly 4 million babies born in the United States each year, back of the envelope calculations suggest that there are about 30,000 births within about a half mile of a fracking site and another 70,000 births about a half to 2 miles away.

Fears of the health consequences of fracking have already stoked bans in many places across the United States. In April, Maryland became the third state to ban fracking, following New York and Vermont. Several countries have also banned the practice, including France and Germany. As local and state policymakers decide whether to allow hydraulic fracturing in their communities, this study provides critical information to help them weigh the costs with the benefits—last year, another study by Greenstone and co-authors Janet Currie, Chris Knittel (MIT) and Alex Bartik (University of Illinois) found local economic benefits, with the average household in communities that allow fracking gaining about $1,900 per year.