All it takes is a trip to the grocery store to know that virtually all of the oranges grown in the United States come from Florida and California. That is naturally where conditions are right, making the crops most profitable and keeping prices down. But suppose a public commission regulated the citrus market so that each state had to grow its own oranges. State regulators would grant exclusive licenses to grow trees, harvest crops and sell products to local consumers. In this absurd world, greenhouses in Maine would supply the oranges in Bangor at exorbitant prices set by the regulator to ensure each farm covered their costs. Since Florida and California would only be allowed to serve their local markets, the most productive citrus groves in the country would lay fallow.

This is essentially how the U.S. electricity sector has operated for decades—and it’s killing our ability to transition to clean sources of energy. Here’s how.

(And learn even more in EPIC’s Off the Charts podcast)

The impact of this historical approach is evident when looking at where coal comes from today, and where it is eventually burned. Twenty-five counties in just a handful of states produce two-thirds of our nation’s coal and then ship it to power plants all throughout the country. The farther away a plant is from a mine, the greater the coal—and with it, electricity—costs. So as uneconomical as it might be to grow oranges in Maine, it costs nearly five times more to buy coal there than in Wyoming—the coal equivalent of the citrus belt where electricity prices are 25% below the national average. Customers in the coal-producing state of West Virginia also get their electricity 25% cheaper than most Americans. 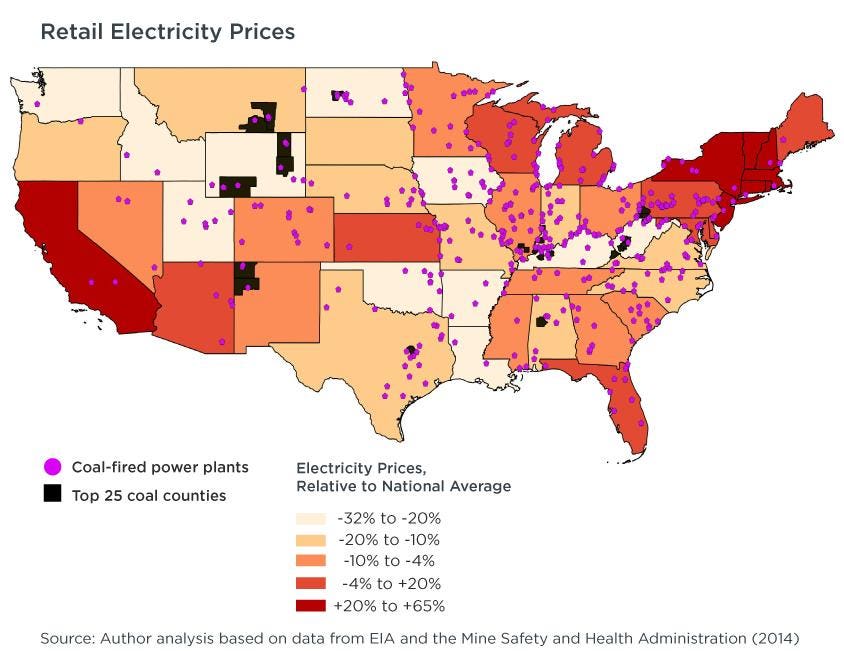 What does this have to do with renewables? Much like coal, wind and solar resources are distributed unevenly throughout the country. Unlike coal, one can’t put the wind or sun on a railcar. Without a transmission network to import electricity from renewables-rich regions, states must do the equivalent of growing their own oranges.

Unfortunately, this is exactly what states are doing when they adopt in-state generation-based renewable portfolio standards. These policies encourage otherwise-surreal investments like solar energy in Massachusetts. And, they’re costing ratepayers more.

Local utility interests are at the heart of these types of standards, and have stood in the way of efficient energy production for some time now. For example, in the early 1990’s, Illinois passed a law requiring power plants to burn locally-sourced coal to fend off a flood of low-cost, low-sulfur coal from Wyoming. It was soon struck down as a violation of the Commerce Clause, which says states cannot effectively impose tariffs on the products of other states.

Today, renewable portfolio standards that favor in-state generation are essentially—from an economic standpoint—doing the same thing as the Illinois Coal Act. While building distant transmission lines might be less glamorous for a local politician than cutting ribbons at new solar installations, it does a lot more to encourage our transition toward renewables. Far more clean energy could be produced if the money being spent on solar energy in Massachusetts was spent in Nebraska instead, and transmitted by electric lines out to where it is needed.

This is proving to be difficult. In March, the Department of Energy approved a new clean energy infrastructure project—the Grain Belt Express —that that would supply enough wind energy to power more than 1.5 million homes in the mid-South and Southeast U.S. Existing power plants would be competed out of the market with this cheap electricity, so local leaders are doing everything they can to stop it. It took the company building the lines six years to win approval in three of the states the lines would cross. Then it hit a road block when Missouri’s legislature rejected it, citing typical not-in-my-backyard reasons.

In future posts I’ll describe how our grid is hamstringing our ability to incorporate renewable energy in an economical fashion. This can be a complicated issue. Before we can even begin down this road, however, it’s important to recognize that insisting upon local generation of renewables is profoundly misguided (and possibly unconstitutional). It’s like limiting the production of oranges in Florida and California to as much as those states can eat or drink, and diverting valuable resources away from productive activities in other states to make up for the shortfall. It’s great for the Maine Citrus Grower’s Association, but bad for everyone else.

***Want to learn more? I talked about this topic in EPIC’s new Off the Charts podcast series. Listen here.

(Thanks are due to Frédéric Bastiat for the example of orange production.)