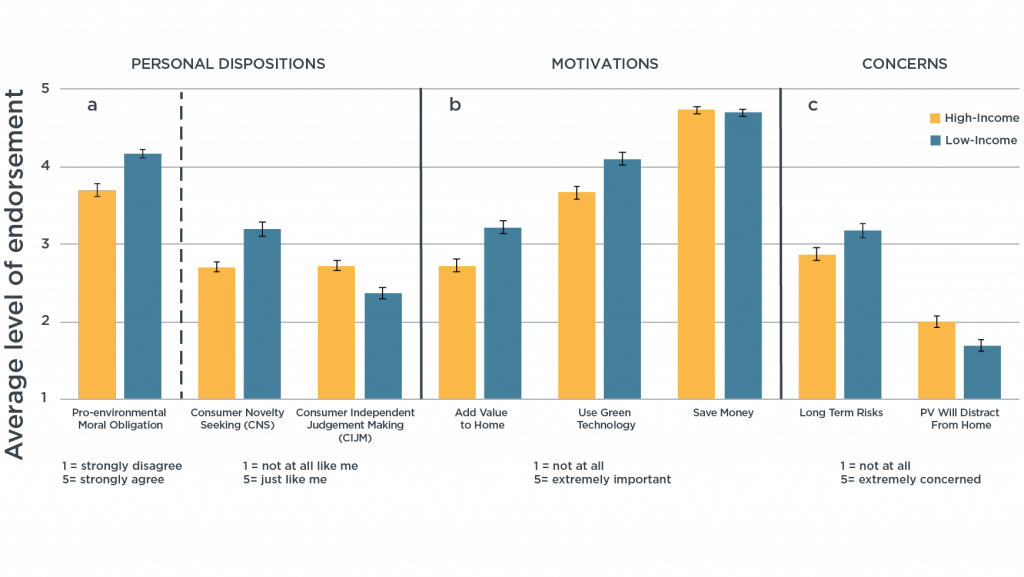 More and more households in the United States are choosing to install solar panels on their roofs thanks to favorable incentives and financing models. Most of these households are wealthy, with the middle class now just starting to catch up. Yet, almost half of the country’s rooftop solar potential lies on low-income homes. To address this inequity, a growing number of policies aim to help low-income households install solar—at little or no cost. Will these consumers choose to sign up?

Kim Wolske, a research associate and assistant professor at the Harris School of Public Policy, compared low-income and higher-income adopters to help answer that question. In partnership with the National Renewable Energy Laboratory (NREL), Wolske surveyed more than 500 low-income households in California who received solar photovoltaic systems at no cost through the nonprofit GRID Alternatives. She then compared their responses to those of high-income rooftop solar adopters from a for-profit installer in the same state.

In theory, providing low-income households with large financial incentives to adopt solar should lead to adoption by individuals with more diverse motivations and concerns than higher-income households who pay out of pocket and may be drawn to the technology for its environmental benefits. But Wolske and her colleagues found the profiles of low-income and high-income adopters are more alike than different. When asked what motivated them to install solar, both groups rated saving money on their electricity bills as the primary reason. That factor was followed by the desire to use and demonstrate the value of solar as a renewable energy technology. More low-income consumers reported being more likely to seek out novel technology, and felt a personal obligation to help confront climate change. One reason more consumers in the low-income group felt this obligation may be because the low-income group was made up of more Latino consumers, who have been shown to be more environmentally motivated and concerned about climate change than non-Latinos. The two groups also reported similar concerns: continued affordability, equipment quality and reliability over time, and having to perform regular maintenance on their solar panel systems. Both groups of households were more concerned about these long-term factors than they were about the solar panels detracting from their homes’ appearance or making their homes harder to sell.

Taken together, the study suggests that even when rooftop solar is highly-subsidized, it may be most attractive to people who fit the profile of “early adopters”—individuals who are pro-environmentally oriented, drawn to novel technology, and less risk averse. That means, “just like in the for-profit sector, program administrators may first need the buy-in of consumers who are already interested in the technology and motivated to use it,” Wolske explains.