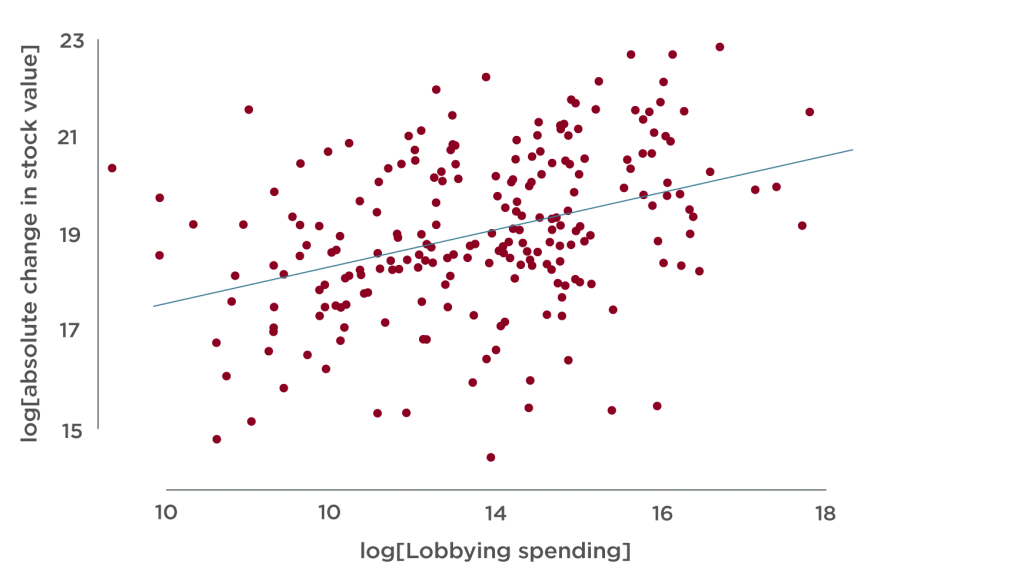 Source: The Social Cost of Lobbying Over Climate Policy, Nature, May 2019

While economists stand by carbon pricing as the most efficient way to reduce emissions, it has proven to be politically challenging. Yet, a decade ago, the United States nearly passed an economy-wide cap-and-trade program: the American Clean Energy Security Act of 2009, or Waxman-Markey bill. It passed the House of Representatives but failed in the Senate. Why?

The simple answer may be lobbying. Referred to by the media as “the sum of all lobbies,” companies spent more than $700 million to lobby for or against the bill. Ashwin Rode, a scientific research director at EPIC and the Climate Impact Lab, measured the effect the bill’s passage would have had on the stock prices of the companies that supported or opposed it. Rode and his co-author discovered that the expected effect of the bill’s passage on stock prices correlated directly with the amount firms spent trying to influence the Waxman-Markey bill.

The more firms expected to gain or lose, the more they spent. And, although the projected “winners” outspent the “losers,” the firms that stood to lose were more effective at influencing the odds of passage than those that would have gained. Rode and his co-author calculated that Waxman-Markey had a 55 percent chance of passing had it not been for the lobbying efforts. With the lobbying efforts, its chances dropped to 42 percent—reducing the probability of the bill passing by 13 percent.

Importantly, the researchers also provided a glimmer of hope by laying out a path for more politically robust climate policies, suggesting subtle changes to a carbon market’s design that can make it more politically acceptable.