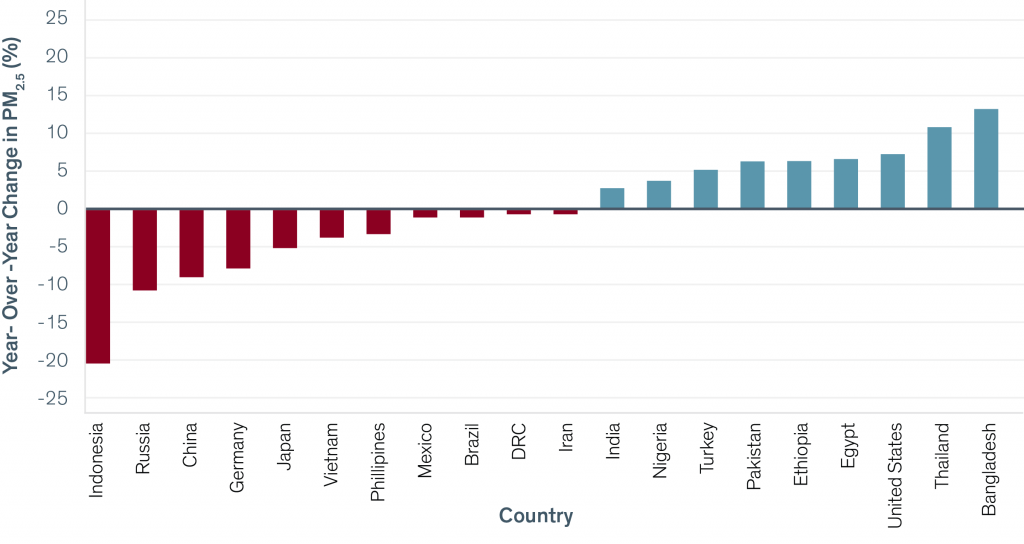 In 2020, Covid-19 lockdowns shut industries and forced vehicles off the roads, momentarily bringing blue skies to localized areas in some of the most polluted regions on Earth. But new data from the Air Quality Life Index (AQLI) shows that there was little change in global particulate pollution. The global population weighted-average PM2.5 level stayed practically flat, going from 27.7 to 27.5 µg/m3 between 2019 and 2020, despite the well-documented, rapid slowdown in the global economy.

Looking regionally, some areas of the world saw their pollution increase from 2019 to 2020, and some saw their pollution decrease—further suggesting that pandemic lockdowns did not play a role or were perhaps offset by economies playing ‘catch up’ in other parts of the year. South Asia, the world’s most polluted region, saw its pollution levels continue to rise across the board. In India, PM2.5 levels rose 2.9 percent, year-over-year; in Pakistan, it rose by 6.3 percent; and in Bangladesh, levels rose by 13.1 percent.

Parts of Southeast Asia saw a decline in pollution in 2020, likely driven by a lower number of fires compared to 2019—a year that was characterized by regional haze events stemming from thousands of fires, primarily in Indonesian. In Indonesia, as well as neighboring Singapore and Malaysia, particulate pollution fell by 20, 38 and 34 percent, respectively. Countries less impacted by Indonesia’s fire events—Cambodia, Thailand and Myanmar—saw increases in particulate pollution from 2019 to 2020. Cambodia experienced the largest increase in PM2.5 in 2020, with pollution levels rising 26 percent. In Thailand, particulate pollution was up 11 percent from 2019.