Powerbrokers around the world are trying to “go all in” on electric vehicles (EVs). Promoting EVs is a centerpiece of the Biden administration’s infrastructure policy. The United Kingdom, California, Quebec and other governments have announced intentions to ban gasoline-powered cars, and General Motors and Volvo have announced plans to stop selling them, all by 2035 or sooner. It’s hard to overstate how large a shift in the vehicle market this represents: EVs have been anointed as the replacement technology, but currently comprise less than one percent of the vehicle fleet. Meeting these lofty goals without imposing serious costs on consumers will require EVs to offer the same services as gasoline cars currently provide. But is that realistic?

One way to better understand the answer to that question is to look at EV driving, or “electric vehicle miles traveled” (eVMT). If households are using their EVs in the same ways as their gas guzzling counterparts, this is a good sign for the EV revolution. On the other hand, if households only use their EVs sparingly, we might worry that current EV technology simply isn’t as good as the internal combustion engine at getting us around. That could signal more pain than we might have thought for consumers to switch away from gasoline.

Despite the importance of this question, it turns out to be surprisingly hard for policymakers to gather comprehensive data on eVMT or charging load (something we have lamented before). Previous research on this topic has used survey evidence, but these results tend to come from small and likely unrepresentative samples of households who are excited to talk to researchers about their new EVs. California policymakers are forced to rely on the roughly 500 California households that have installed a dedicated electricity meter for their EV to approximate the behavior of several hundred thousand EV users. These meters are costly to install, and it’s easy to imagine that people who make these large investments might behave differently than the average EV owner. This is important because these estimates of EV electricity consumption feed into infrastructure planning and determine how hundreds of millions of dollars of Low Carbon Fuel Standard credits are allocated. The financial stakes are real.

In a new working paper, my coauthors and I provide the first at-scale estimates of eVMT, using a new approach. Our sample is large and representative of the overall EV population in California. We combine nearly 12 billion hours of electricity meter measurements—roughly 10% of residential electricity meters in California’s largest utility, Pacific Gas & Electric—with household-level EV registration records from 2014 to 2017 to estimate how much EV charging is occurring at home. We then adjust this result to account for away-from-home charging to retrieve a measure of average eVMT. 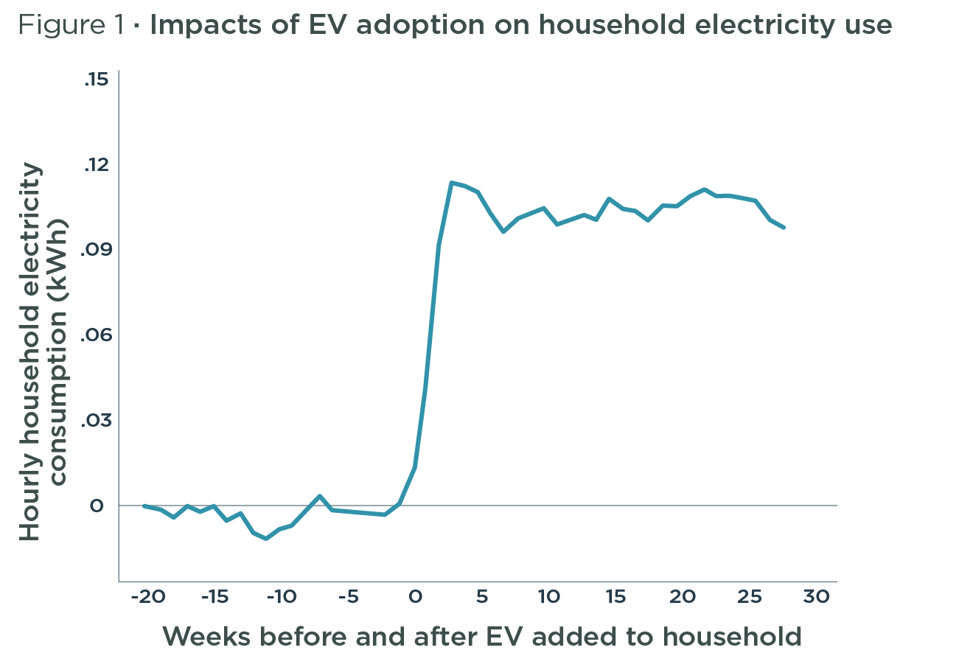 We find that, when a household gets a new EV, electricity demand increases sharply (figure 1), and that this increase remains quite stable more than 6 months after adoption. However, the increase we see is relatively small: only 2.9 kilowatt-hours (kWh) per day, or less than half the amount state regulators have assumed using data from dedicated-meter households. As we expected, most EV charging occurs at night (figure 2) – itself a relevant point in the climate policy debate, as these are the somewhat dirtier hours on the California electric grid. We also find big differences in consumption by EV type: Teslas are the new “electricity guzzlers,” using about twice as much electricity as the other EVs in our data. Non-Tesla battery electric vehicles use about the same amount as plug-in hybrids. This could reflect something about the cars themselves (Teslas have longer ranges) or something about the people who drive them. 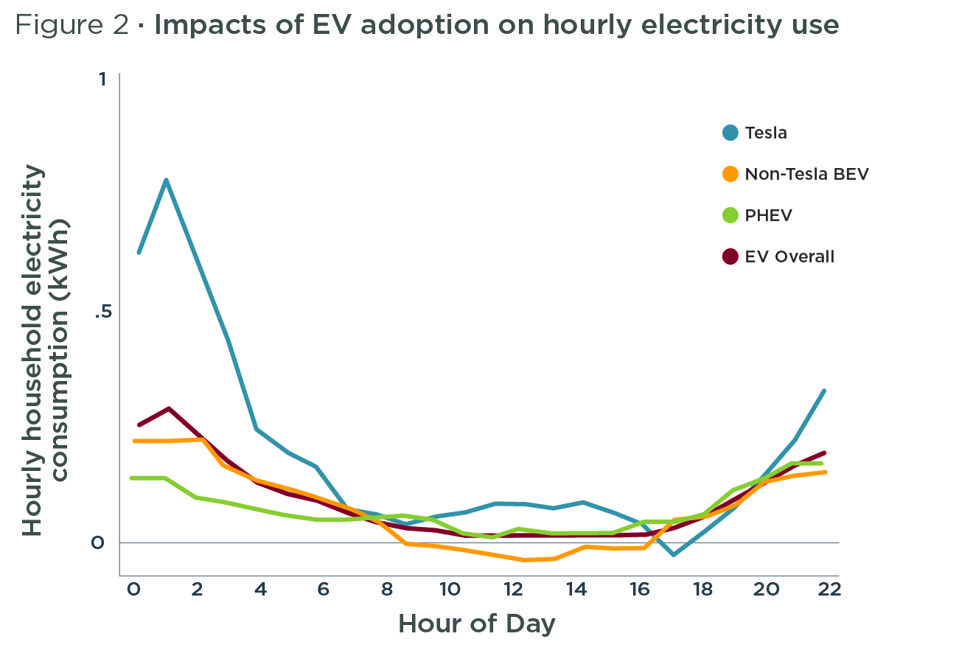 To translate these numbers from kWh to eVMT, we adjust for the share of out-of-home charging (most of which is directly and accurately measured, and is thought to account for approximately 15% of total charging) and scale by the fuel efficiency of each EV type. These calculations show that electricity powers approximately 5,300 miles of EV travel per year in northern California, which is roughly half as far as EV driving estimates used by regulators and also half as far as vehicle miles traveled in gasoline-powered cars in California or nationwide.

So, what does this tell us about the feasibility of a full-scale switch to EVs? It may be that early-EV-adopting northern Californians are just different, and simply drive less than average, whether they’re driving a gasoline car or an EV. If so, then perhaps eVMT will increase over time as more representative drivers convert. It’s also possible that current EV owners bought it as a second vehicle, and range anxiety or less hauling capacity cause these drivers to opt more often for their conventional car. Even if current EV owners are “different,” putting lots of miles on an EV could be even harder for single-car families, particularly those without a place to charge. We’re actively digging into these questions in ongoing research.

Regardless of the drivers of low eVMT, there are clear lessons for policymakers. First, eVMT data should be made directly available to regulators and researchers, so that our results can be replicated in other settings. We spent years gaining access to the data that we used for this study – but this process could be a lot easier. EV manufacturers digitally record data from the cars that they sell. They haven’t, however, been required to share them. Given the limited data available to policymakers making high-stakes decisions on our economy and transportation future, it’s clear that this should change.

Second, it may be tougher than policymakers think to electrify 100 percent of road travel. We are far from understanding how much it will cost to fully transition to EVs, and our results suggest that the transition may cost more than we thought.  Rather than relying on bans and mandates, we should give drivers the right incentives by pricing vehicle emissions, and letting consumers decide what works best for them. At the moment, incentives are backwards. Electricity prices in the United States are low where the grid is dirtiest and high where the grid is cleanest. For those concerned with equality of access, it’s worth noting that some EV owners in California are paying several times more to charge than their neighbors due to quirks in the way prices are set in the state. This is both inefficient and unfair.

Collectively, we are only beginning to learn some of the most basic facts about the costs and benefits of transportation electrification. To inform efficient policy decisions going forward, we must democratize access to key data sources (like eVMT and charging behavior), acknowledge the fact that there is much we do not yet know, and create conditions that allow us to course-correct as new information becomes available.

Areas of Focus: Energy Markets
Definition
Energy Markets
Well-functioning markets are essential for providing access to reliable, affordable energy. EPIC research is uncovering the policies, prices and information needed to help energy markets work efficiently.
More on this Research Theme
, Transportation
Definition
Transportation
Mobility is central to economic activity. Yet, a lack of fuel diversity and continued demand growth have made the transportation industry a major contributor to global pollution and carbon emissions....
More on this Areas of Focus / Research Topic
Related...