Impacts of EV Adoption on Household Electricity Use 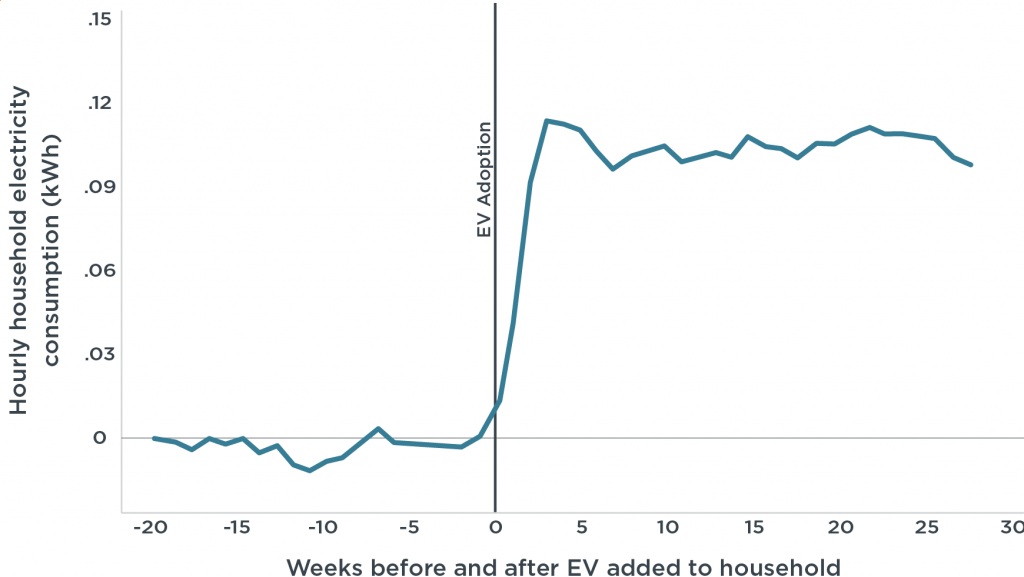 Powerbrokers around the world in 2021 announced their intention to “go all in” on electric vehicles (EVs).  EVs have been anointed as the replacement technology, but currently comprise less than one percent of the vehicle fleet. Meeting these lofty goals without imposing serious costs on consumers will require EVs to offer the same services as gasoline cars currently provide. But is this the case so far?

One way to start to answer this question is to look at how much people are driving their EVs. If households are putting as many miles on their EVs as on their gas-guzzling counterparts, this is a good sign for the EV revolution. On the other hand, if households only drive their EVs sparingly, this could signal that the switch away from gasoline could be more difficult than we hope. More innovation is likely needed—for instance, in charging networks, battery capacity or model offerings—before customers switch en masse.

Harris Public Policy’s Fiona Burlig, along with her co-authors at UC-Davis and UC-Berkeley, provides the first at-scale estimates of “electric vehicle miles traveled” (eVMT) that represents the overall EV population in California. To make this estimation, Burlig and her colleagues combine nearly 12 billion hours of electricity meter measurements with household-level EV registration records from 2014 to 2017 to estimate how much EV charging is occurring at home.

They find that when a household gets a new EV, electricity demand increases sharply, and that this increase remains quite stable more than 6 months after adoption. However, the increase they see is relatively small: only 2.9 kilowatt-hours (kWh) per day, or less than half the amount state regulators have assumed using data from dedicated-meter households. That translates into about 6,700 miles of driving in battery electric vehicles per year—roughly half as far as regulators’ estimates, and only half as far as people on average drive their gas-powered cars.

Areas of Focus: Energy Markets
Definition
Energy Markets
Well-functioning markets are essential for providing access to reliable, affordable energy. EPIC research is uncovering the policies, prices and information needed to help energy markets work efficiently.
More on this Research Theme
, Transportation
Definition
Transportation
Mobility is central to economic activity. Yet, a lack of fuel diversity and continued demand growth have made the transportation industry a major contributor to global pollution and carbon emissions....
More on this Areas of Focus / Research Topic
Related...