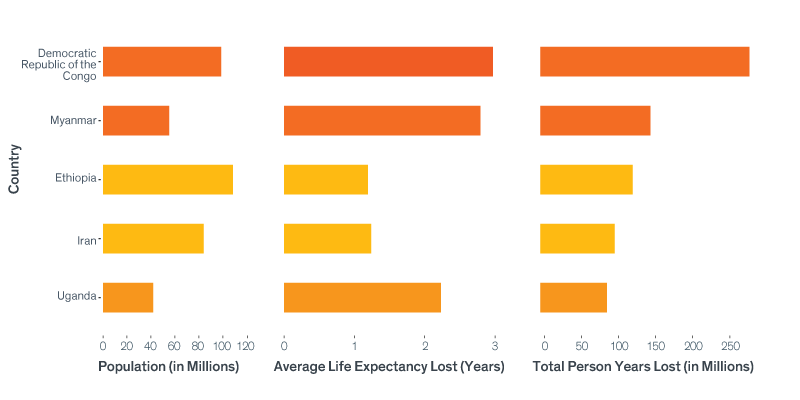 The Air Quality Life Index (AQLI) illustrates the important role pollution policy plays in improving life expectancy. But many regions of the world today lack even national air quality standards—an essential step for reducing pollution in a country. Many countries lacking enforceable national air quality standards are also some of the most polluted. For example, neither the Democratic Republic of the Congo nor Myanmar has established national-level air standards that are tied to legislative instruments, yet they are the fifth and seventh most polluted countries in the world, respectively. If the Democratic Republic of the Congo and Myanmar achieved air quality standards that met the stringency of the World Health Organization’s guideline (5 µg/m³), their residents would see their lives expand by 2.9 and 2.7 years, respectively. Put another way, it would save a combined 282.1 million (Democratic Republic of Congo) and 148.4 million (Myanmar) life years in each respective country.

Along with the Democratic Republic of the Congo and Myanmar, Ethiopia, Iran and Uganda round out the top five countries with no national-level air quality standards that would see the most benefits from cleaner air (UNEP Report, 2021). Along with highly polluting cooking fuels in the African countries, these countries all share a common problem: fossil fuel use.  In Iran, the second largest producer of oil in 2021, and Myanmar, per capita electricity consumption from fossil fuels has continued to grow over the past 10 years. And in Africa, energy consumption is expected to grow more rapidly than ever before, with the projected increase in coal consumption between 2017 and 2040 expected to be more than 3 times the increase observed between 1995 and 2017. Unless actions are taken to provide alternatives to fossil fuel use, and install strong, enforceable air standards, air pollution will only become a greater problem in these countries.