This post was co-written by Louis Preonas, a former postdoctoral scholar at EPIC who is now an assistant professor in the Department of Agricultural and Resource Economics at the University of Maryland, College Park.

Summer is the center of the growing season for many American crops. But as already warm summers start to heat up with climate change, what impact could this have on crops? As one example, without policy changes, two of the most important crops in the United States—corn and wheat— could see yield declines upwards of 80% in the Midwest.

Modern agriculture is big business, so it only makes sense that sophisticated farmers would find ways to adapt to a changing climate. It’s no surprise they’re already turning to water as one form of adaptation. Both field research and crop models find that irrigation dampens the damaging effects of temperature on crop yields. But what happens when the farmer’s source of water is tapped out?  They look for it elsewhere. This could become a major problem as their adaptation to climate change only exacerbates another major impact from climate change—water scarcity.

As climate change continues to increase the frequency and severity of droughts, we’re studying what farmers are doing to maintain their livelihoods during these periods of water scarcity. We’re also thinking hard about the important role policy can play in protecting all of us from the negative impacts of drought. California is an ideal setting for studying agriculture, as it generates more than 13% of the country’s total crop value—more than $50 billion in 2016. California farmers produce more than 400 different commodities, including two-thirds of all American fruits and nuts. Most of this production takes place on 9 million acres of “prime” irrigated farmland in the Central Valley.

Another feature that makes California a good lab to study climate change is that the state has recently experienced a series of droughts, with the most recent lasting from 2011 to 2017. For many farmers, this has caused severe curtailment of their water supplies. As the climate continues to warm, this might become the new normal.

What are California farmers doing to cope? One option is crop switching. Despite somewhat regular droughts, California is home to a number of extremely water-intensive crops. For example, the state produced more than 6.5 million tons of alfalfa on more than 1.2 million acres in 2016. Alfalfa is both extremely water intensive and relatively low value—only $147 per ton. Perhaps unsurprisingly, alfalfa production fell precipitously during the most severe drought in the state’s history. This suggests that some farmers responded to the drought by ripping out their alfalfa crops. 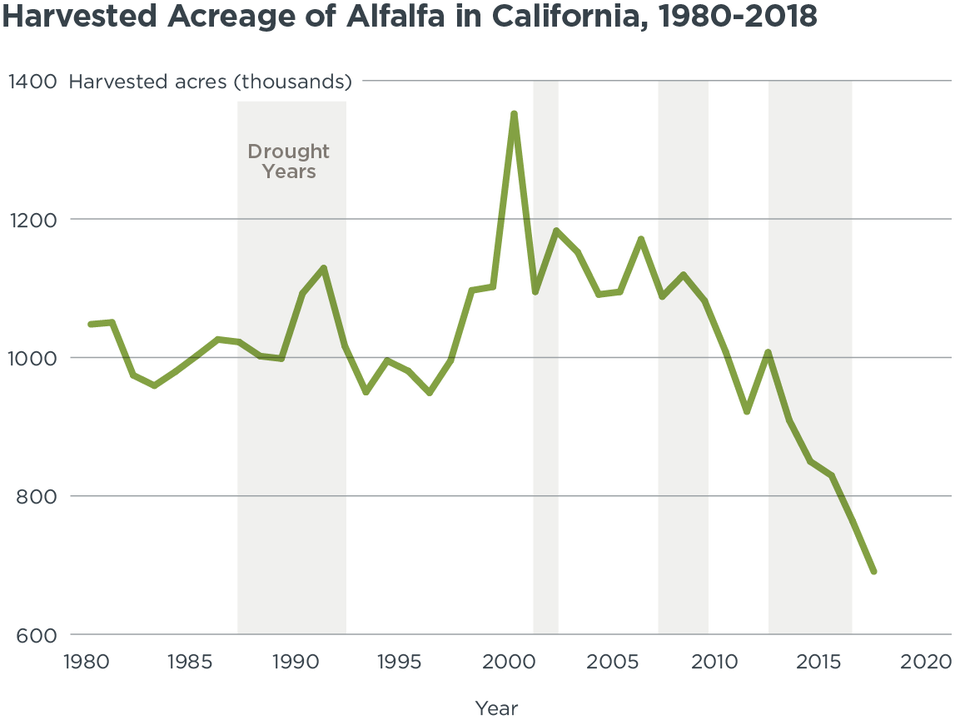 But crop switching doesn’t seem to tell the full story. If anything, California farmers have doubled down on other highly water-intensive crops. Production of pistachios, almonds, and wine grapes have all marched steadily upwards since 1980, continuing this trend in spite of the recent drought. 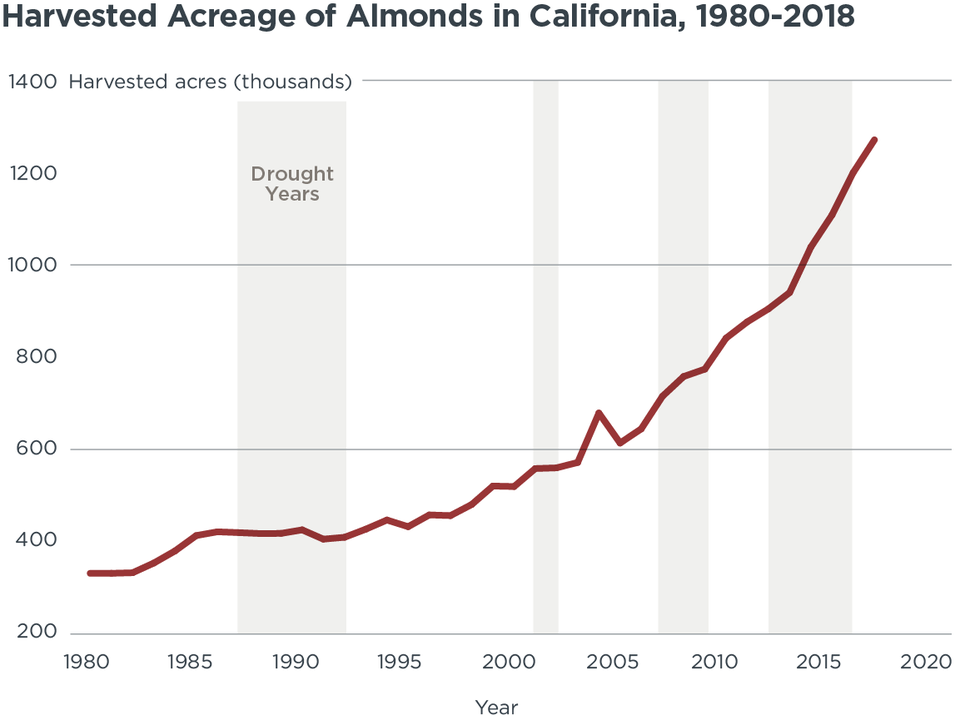 How are farmers able to continue growing these water-guzzling crops while their surface water deliveries dwindle? They find alternative water sources underground, pumping large volumes of groundwater from deeper and deeper wells. California farmers have long substituted between surface water and groundwater, especially during drought-induced restrictions on their surface water allocations. 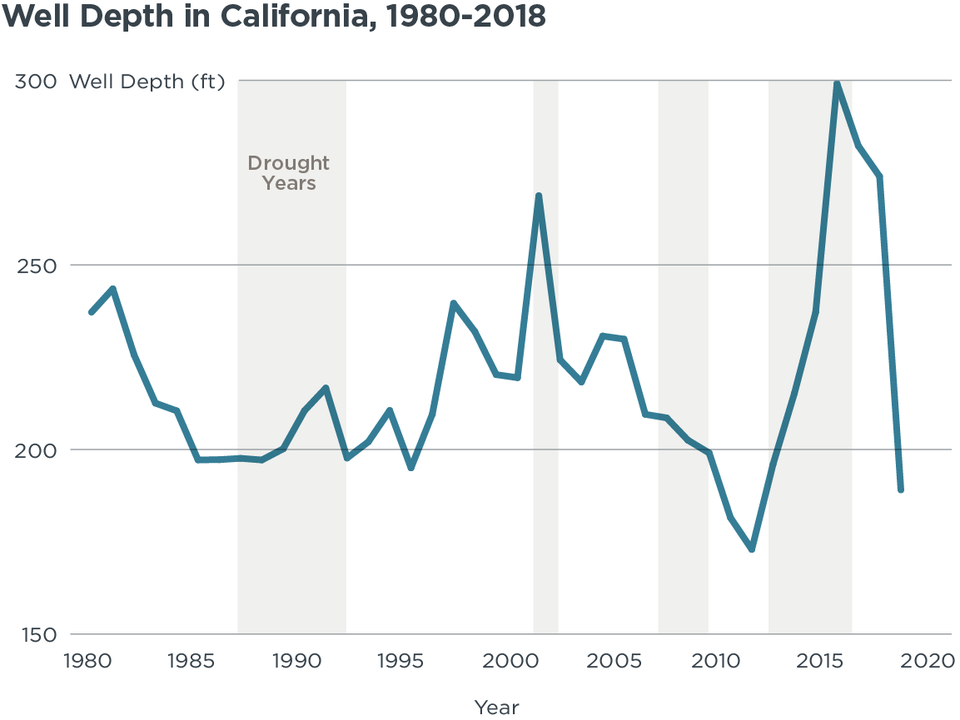 While California has long had a complex system of surface water rights, groundwater legislation in the state is very new. The first comprehensive state-wide groundwater legislation—the Sustainable Groundwater Management Act—was only passed in 2014, and its mandated groundwater management plans don’t come into effect until 2022. The Act represents an important step in the right direction, enabling local agencies to manage groundwater resources using market-based mechanisms (think taxes or cap and trade). These policies are economists’ preferred way of allocating scarce common-pool resources, because they ensure that farmers face the right incentives around groundwater use.

While the Sustainable Groundwater Management Act is a major step forward in groundwater regulation, the substitution between surface and groundwater we are seeing calls for an integrated policy approach. Just as surface water restrictions have likely led to faster groundwater depletion, groundwater regulations have the potential to strain the surface water system. Because of the importance of California’s agriculture to the world, this could have far-reaching impacts: from how much California residents are paying for water from the tap to how much we’re all paying for food at our local grocery stores.

Areas of Focus: Climate Change
Definition
Climate Change
Climate change is an urgent global challenge. EPIC research is helping to assess its impacts, quantify its costs, and identify an efficient set of policies to reduce emissions and adapt...
More on this Areas of Focus / Research Theme
, Climate Economics
Definition
Climate Economics
Climate change will affect every sector of the economy, both locally and globally. EPIC research is quantifying these effects to help guide policymakers, businesses, and individuals working to mitigate and...
More on this Areas of Focus / Research Topic
, Climate Science
Definition
Climate Science
EPIC’s interdisciplinary team of researchers is contributing to a cross-cutting body of knowledge on the scientific causes of climate change and its social consequences.
More on this Areas of Focus / Research Topic
Related...