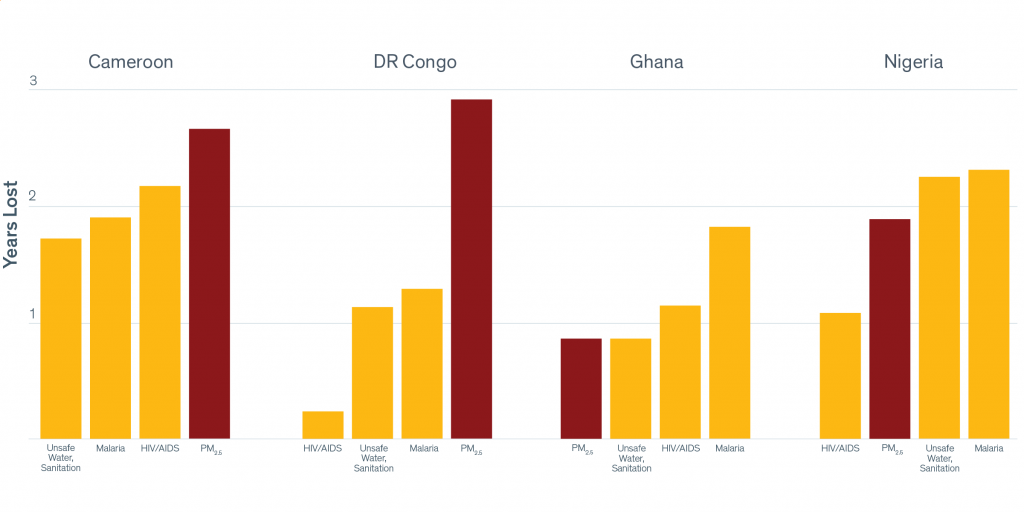 The health focus in Sub-Saharan Africa has centered on infectious diseases like HIV/AIDS and malaria, which receives about 10 percent of health expenditures in the region. But the Air Quality Life Index (AQLI) shows that particulate pollution—often ignored as a problem—impacts life expectancy in a comparable and sometimes more devastating way than these other causes. That is certainly the case in the Democratic Republic of the Congo (DRC)—the most polluted country in the region and fifth most polluted globally—where particulate pollution in 2020 was nearly 7 times higher than the World Health Organization guideline. As a result, the average resident of the DRC is losing 2.9 years off their life expectancy. That’s compared to just 3.6 months due to HIV/AIDS. Across Central and West Africa—home to more than 600 million people living in 27 countries —the average person is set to lose 1.6 years off their lives if the current levels of pollution persist.

Assuming business as usual, the situation could worsen as energy demands are expected to triple across the African continent by 2030. And yet, only Cameroon has set a national standard for particulate pollution. Further, as of 2019, only a handful of real-time air quality monitoring stations exist throughout the entire region, resulting in a lack of transparent and actionable pollution data. In comparison, about 200 real-time monitors exist in India, which has a smaller land mass than Central and West Africa. The lack of data transparency is a major hindrance to policy action.

Air Pollution is Devastating for Rich and Poor Alike

Wanted: A Law With Tooth