Global Average Potential Gain in Life Expectancy by Reducing PM2.5 to WHO Guideline, 1998-2008 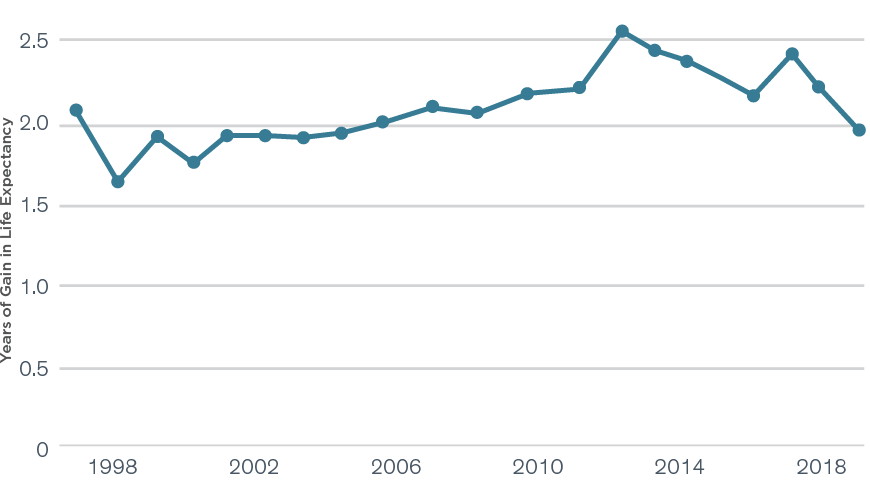 The challenge of COVID-19 underscores more than any time in recent history how important it is to protect public health. Yet, as countries around the world race to develop a coronavirus vaccine, there is another, everyday killer causing billions of people to lead shorter and sicker lives: air pollution. New data from the Air Quality Life Index (AQLI), which converts particulate air pollution into its impact on life expectancy, reveals that particulate pollution was the greatest risk to human health before COVID-19. And without strong and sustained public policy, it will be after COVID-19.

The analysis finds that over the last two decades, particulate pollution has reduced average global life expectancy by about 2 years, relative to what it would be if air quality met the World Health Organization (WHO) guideline. In that time, improvements in some countries were balanced out by worsening conditions in other countries—pointing to the fact that air pollution is globally a stubborn problem.

South Asia has seen a 44 percent rise in pollution, cutting lives short by 5 years on average in Bangladesh, India, Nepal and Pakistan. About a quarter of the global population lives in these four countries, yet they make up 60 percent of the life years lost to pollution. While high pollution across the entirety of Bangladesh makes it the most polluted country in the world, a quarter of India’s population is exposed to pollution levels not seen in any other country—the nearly 250 million residents of Uttar Pradesh are on track to lose more than 8 years of life expectancy relative to if air quality met the WHO guideline; more than 9 years in Delhi.

Eighty-nine percent of Southeast Asia’s residents live in areas where particulate pollution exceeds the WHO guideline. Growing metropolises—such as Jakarta, Singapore, Ho Chi Minh, and Bangkok—bear the greatest burden. City-dwellers could gain 2 to 5 years onto their lives if pollution were reined in to meet the WHO guideline.

Meanwhile, three-quarters of the world’s reductions in pollution have come from China since they began a “war against pollution” in 2013. China has reduced pollution by nearly 40 percent in 5 years, adding about 2 years onto the average life expectancy if the reductions are sustained. To put China’s success into context, it took several decades and recessions for the United States and Europe to achieve the same pollution reductions that China accomplished in 5 years while continuing to grow its economy.

Looking forward, Central and West Africa could become a pollution hotspot, with growth in coal consumption in Africa over the next two decades projected to be triple what it was in the past two decades. Already, particulate pollution poses just as serious a health threat as HIV/AIDS and malaria, having a comparable impact on life expectancy.