Climate change is a top priority for President Joe Biden as he prepares to meet the world at the next international climate summit, COP26, in November. But how big of a priority is it for the American public? How much would they pay out of their own wallets to confront climate change? And, where do they stand on key issues?

On October 26, EPIC hosted a conversation with the 2021-2022 Visiting Fellows in Policy Practice Carlos Curbelo and Heather McTeer Toney. Curbelo and McTeer Toney dug into the results of an EPIC/AP-NORC poll conducted to track opinions on central topics shaping the energy and climate landscape in the United States. EPIC Director Michael Greenstone joined the conversation, which was moderated by The Atlantic’s Rob Meyer.

Both Curbelo and McTeer Toney stressed the importance of humanizing the issue and connecting climate change to aspects of people’s lives.

“We have to meet people where they are,” McTeer Toney said, explaining how she talks about climate all the time without using the words climate change. “I can talk to a hunter about the changes in the weather…whether or not the rains are coming at a certain time, and I’m talking about climate the entire time. And the recognition is that the people I’m talking to are talking about climate and they are just as concerned as a social activist sitting in California.”

Curbelo similarly explained how he talks with his constituents in Florida, drawing on his conversations with conservative fishermen and charter boat captains.

“I would tell them the environment is the economy. If the Florida Bay dies, no one is going to come down here to see it and to fish and to dive and to snorkel,” he said. “We really do need to meet people where they’re at and that’s how we’re going to continue building this national coalition that’s going to help us address probably the greatest challenge, not just of one generation, but for multiple generations.”

Greenstone described how Curbelo and McTeer Toney seemed to have very similar perspectives in that, “climate change can’t stand by itself…you have to wrap it around something else to draw more people in,” he said, “The technocratic economic viewpoint is it’s super hard to devise efficient and good climate policies when the only thing you’re targeting is climate. And then, now when you hear you need to do three other things and the climate then you’re like ‘Wait, how’s this all going to work?’ and it’s very complicated.”

McTeer Toney described that often average Americans—Republicans and Democrats—want the same things, and to make progress on climate change it is important to allow them to see that the things they want are connected to climate change.

She noted that in the poll when climate change stood against other social issues, it was easy to see why it would rank lower as opposed to if it were woven into all of these issues.

“If I begin to interweave those things together, carbon taxing, or polluters paying, that could be a way that the air in my community becomes better so that my children who have asthma don’t have to worry about whether they can go out and play…having a conversation around new clean energy jobs as a pathway to a better job for myself in the space that I live, finding ways to have impacts on climate change …[to] reduce heat impacts maybe in the urban place where I live, which is a direct reflection on violence in the communities—now I have woven climate into all of those social justice things that I just said. And I think the more that we begin to show how climate and environmental impacts are actually a part of our everyday life as opposed to something separate, the closer we become to what the solution path is.”

“People bring up this topic of greenwashing. So what?” asked Curbelo. “How compelling our cause that some people want to pretend that they’re a part of it. That’s like being one of the cool kids in school. Maybe someone says they’re your friend. You don’t even know them, but it’s good. That helps your cause, that helps your reputation.”

The poll indicated that the ground may be shifting, however. Half of Americans are more convinced by the science than they were five years ago; more than half view climate change as a very or extremely important issue—an increase in the last three years; and, compared to the 2018 EPIC/AP-NORC poll results, the number of Americans that would pay $100 more for their energy every month has doubled. “Now it is convenient for them to be a part of this cool kids club,” she said.

“On this issue, quietly, below the headlines, there is a growing bipartisan consensus in the Congress,” he said.

He believes that if the members of Congress were polled on the same questions, the results would be fairly similar, “if you were to poll members anonymously,” he adds.

McTeer Toney believes the Congress is actually a few years behind public opinion.

“I think what we see sitting in Congress now is a reflection of those 2018 numbers. And so, we’re a cycle behind,” she said, explaining that leaders in Congress are representing views they heard from constituents several years ago when they personally held local and state government positions. What Americans think today, is being communicated to those local officials today, and those local officials will rise up to Congress in the years ahead.

So, what can be done now to see action in Congress? Curbelo noted that to move more Republicans from quietly believing in climate change to actively doing something about it, groups like the one he started in Congress, the Climate Solutions Caucus, are very important. At the time that he created the Caucus, Curbelo remembered some people being skeptical and saying that some Republicans were joining who weren’t committed to the cause. But Curbelo believes that in joining, reporters and the American public can hold them accountable.

“I do think we will eventually be able to bridge the gap because you look at the numbers and every year they get better,” Curbelo said.

McTeer Toney agreed, but noted that bringing people together on the issue was critical because we’re running out of time.

“The thing about climate that’s different from everything else is, number one, it’s intersectional, and number two there’s a timeline,” she said. “It doesn’t make a difference if you’re on the extremely wealthy end or you’re on the extremely poor end, climate change continues to happen and it will impact all of us. So, it is in our best interest if we want to beat the time clock that we figure out how to work together.” 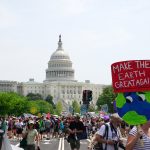 In new EPIC-AP/NORC poll, more than half support, and only 16 percent oppose, a clean electricity standard that would decrease the share of electricity coming from traditional sources. More Americans support than oppose requiring all new vehicles to be electric.
Learn More 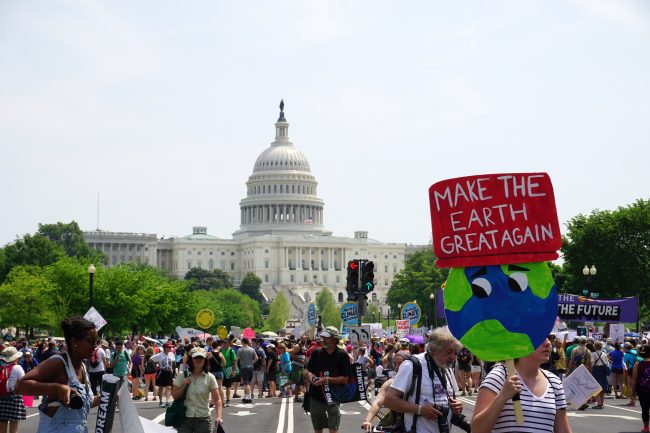 In new EPIC-AP/NORC poll, more than half support, and only 16 percent oppose, a clean electricity standard that would decrease the share of electricity coming from traditional sources. More Americans support than oppose requiring all new vehicles to be electric.
Related...