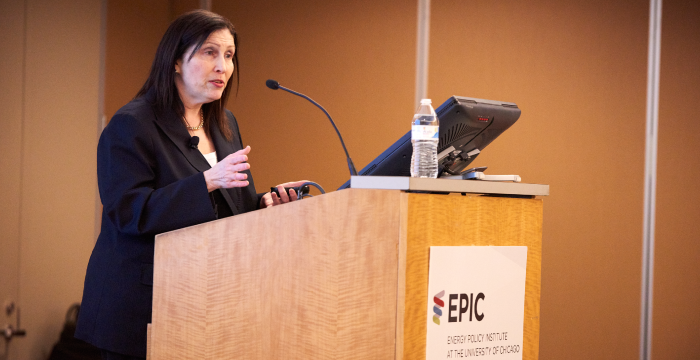 U.S. shale resources have been a “game changer” for the energy industry, said ConocoPhillips Chief Economist Marianne Kah. Now, confronted with historically low oil prices and global efforts to reduce fossil fuel emissions, what is the outlook for the shale revolution in the near and long term? Kah addressed this question and others at an EPIC seminar series event on March 16th.

Kah began her talk by reviewing how the shale industry has vastly improved over the years. Companies like ConocoPhillips have found ways to cut drilling time, increase efficiency, reduce their land footprint, and improve environmental performance.

“Industry standards have improved greatly, as well as our knowledge,” Kah said.

The booming industry has created an “economic bonanza” for the United States, argued Kah, supporting 2.7 million jobs at a time when job growth in other sectors of the economy has lagged and driving as much as 40 percent of GDP growth from 2008 to 2013. The shale boom has also helped to stabilize oil prices. Kah cited a 2014 study from ICF International that found that without the U.S. shale renaissance, global crude oil prices would have been $12 to $40 per barrel higher in 2013 and consumer gasoline prices would have been $0.30 to $0.94 per gallon higher.

Following the rapid rise of U.S. shale production and slower than anticipated global oil demand, world oil prices collapsed beginning in 2014 and have since shed more than two-thirds of their value.

“Our producing at such a high rate was one of the factors that led to a price decline,” Kah said.

Since that price decline, the industry has experienced its share of losses. To resume to its previous growth trend, the industry would need to see prices increase to $85 a barrel, according to Kah. Still, she said that given how much prices have dropped, production has proven to be resilient in comparison to expectations. And compared to other oil supplies around the world—from oil sands to offshore drilling to OPEC reserves—U.S. shale oil is relatively low cost and benefits from shorter development cycles.

“This is one of the most economical resources we can invest in,” Kah said.

Because it requires less lead time in production, she expects the industry to invest more in shale moving forward. But Kah warned that, contrary to what some believe, the U.S. shale industry cannot respond fast enough to act as the world’s swing supplier—available to step in during times of an oil crisis to balance out prices. She pointed to OPEC’s spare capacity and commercial inventories as the only resources able to perform this function.

Kah also addressed the beneficial role that crude oil exports will have on the industry, saying that they are a necessary relief valve at times when domestic production of the ultra-light oils emanating from shale regions exceeds refinery capacity to economically process such oils. In recent years, the 40-year-old U.S. crude oil export ban prohibited such exports, leading to steep domestic price discounts that many analysts suggested were limiting growth in U.S. oil production. The ban was lifted in late 2015.

While a significant benefit to the economy, Kah acknowledged that shale drilling and the industry as a whole must continue to work to address a number of environmental concerns. These include reducing methane leakage, protecting groundwater quality, using less fresh water particularly in areas of scarcity, addressing community impacts from operations such as truck traffic and air quality, and managing water disposal wells to reduce the risks of triggering seismic activity.

However, the greatest challenge may be learning to better communicate with communities to address the misinformation about hydraulic fracturing, she said. She pointed to universities as being a good resource to objectively communicate the science.

Broadly, in respect to improving the economics and environmental safety of shale production, Kah said, “We’re still on the steep portion of the learning curve for implementing innovative solutions. There’s still more we can do.”

She sees this period of low prices as a good time for the industry to stop and reflect to see what more can be done to improve.