On almost any major issue, from climate change and urbanization to international trade and peace and security, how the US and China work together (or don’t) will shape our global future. To tackle these challenges, the University of Chicago and China-US Exchange Foundation partnered to bring renowned experts from China and the US together through a series of annual forums. The first forum, held at the University on May 19th and hosted by the Energy Policy Institute at Chicago (EPIC) and Paulson Institute, focused on the critical challenge of climate change.

Madame Fu Ying, the chairperson of the Foreign Affairs Committee for the 12th National People’s Congress of the People’s Republic of China, was a featured guest at the forum. Fu emphasized that both China and the US have shown their leadership in confronting climate change, with a landmark joint climate announcement last year outlining their respective climate goals for 2025 and beyond. “We all know without effective and coordinated action, we’ll all be paying the price of global warming,” Fu said at the event. 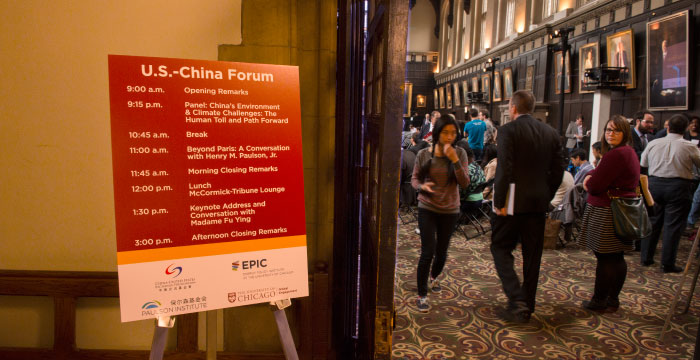 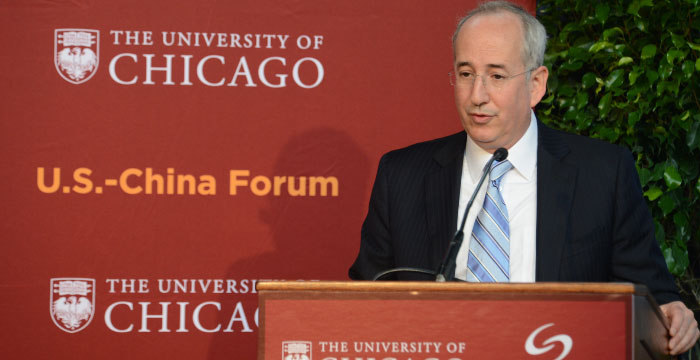 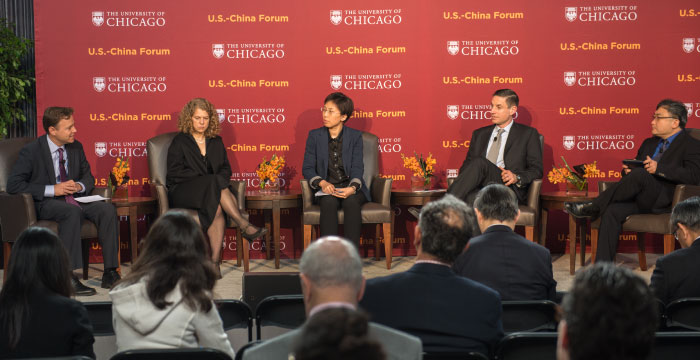 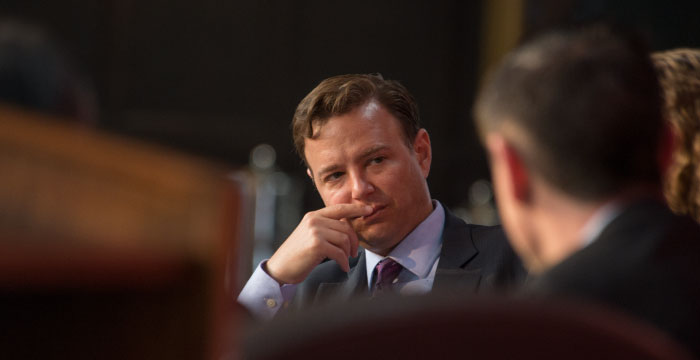 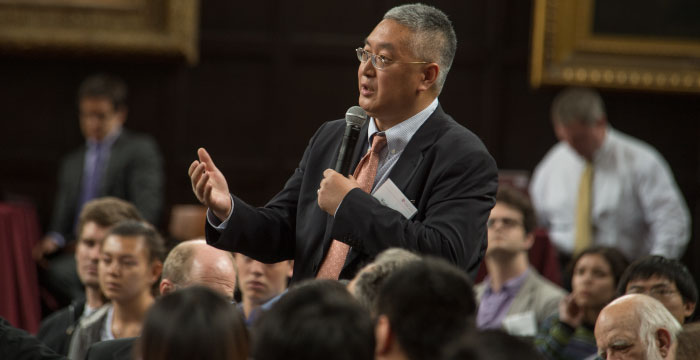 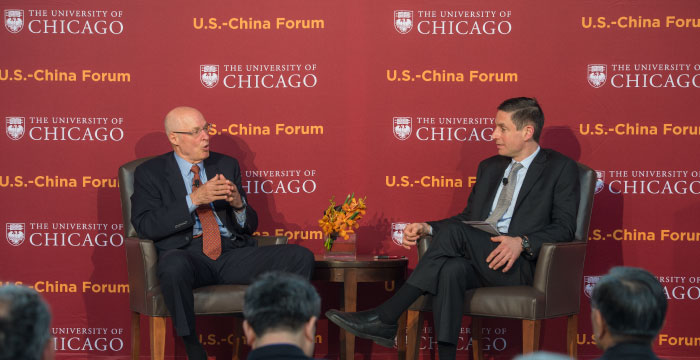 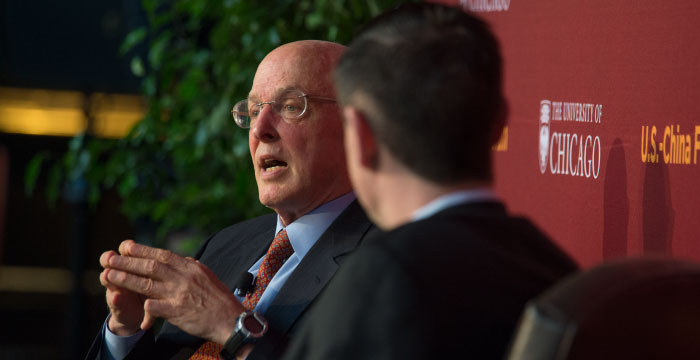 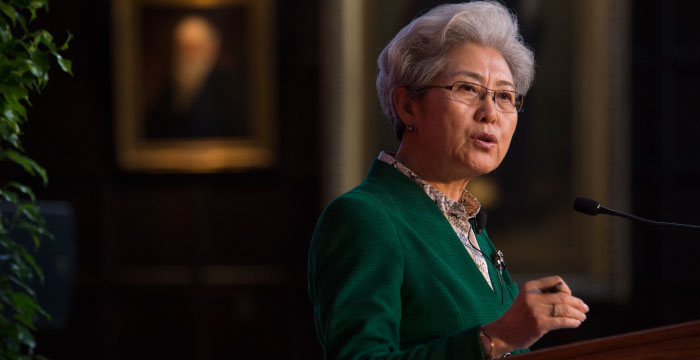 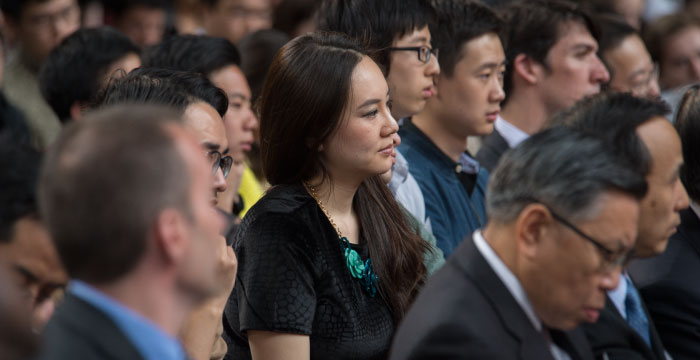 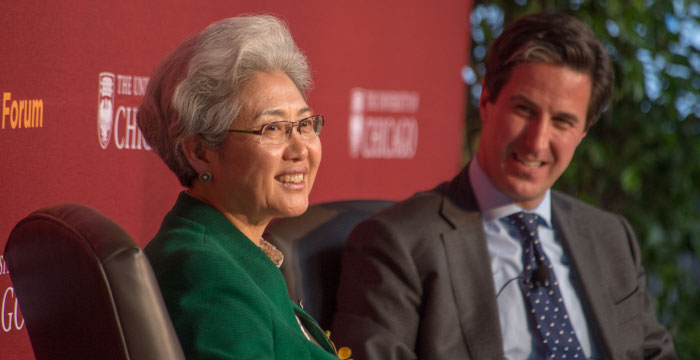 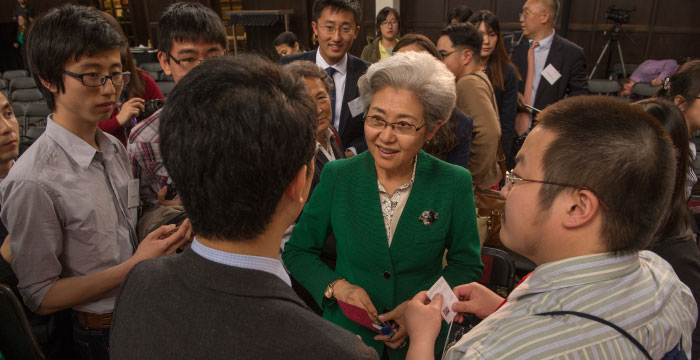 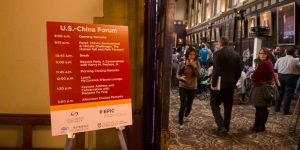 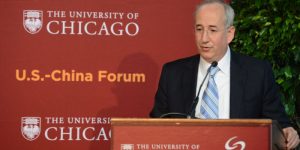 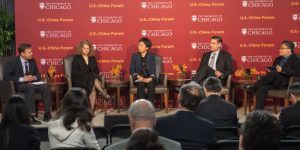 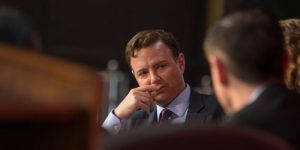 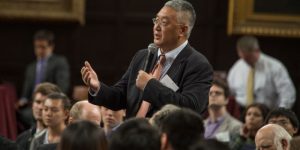 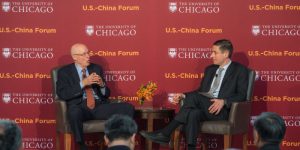 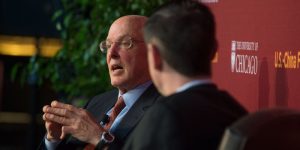 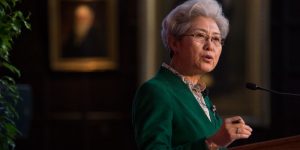 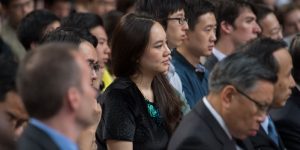 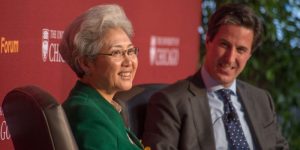 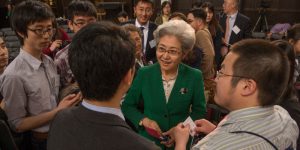 Fu expressed hope that the displayed leadership from China and the US would go a long way in fostering collaboration when international negotiators meet in Paris later this year for the next round of UN climate talks. But a Paris agreement would just be the beginning of a long road to realize those commitments, as was expressed by a panel of academics focused on the human toll of environment and climate challenges, and the path forward.

Elisabeth Moyer, an associate professor of atmospheric science at the University of Chicago’s Department of Geophysical Sciences, was the first to present on the panel. She explained that if China’s energy consumption continues to grow without finding alternatives to coal – which accounts for 80 percent of its total electricity – the impact on climate will be dramatic, causing rising seas and ultimately, devastation for China’s low-lying coastal cities. “We aren’t going to conserve our way out of this,” Moyer said. “We are going to have to find more sources of energy.”

Aside from emitting carbon emissions that further global warming, China’s coal use has also created a major air pollution problem for the country. There to discuss this challenge was air pollution expert Wang Litao, a professor at the Hebei University of Engineering in China. Wang mapped out China’s aggressive targets for reducing air pollution (PM2 fine particle emissions)—25 percent for the Beijing/Tianjin/Hebei region, 20 percent for the greater Shanghai region and 15 percent for the Guangdong Pearl River Delta region by 2017. There is some progress already, she noted. Handan (Wang’s home town), which is one of the most polluted cities in China, saw a 17.5 percent reduction in PM2 emissions in 2014, largely because the government shut down a number of inefficient, small coal-fired plants. “I’m optimistic, because of the very strict actions taken by local and central government,” Wang said.

The government is acting to cut air pollution largely because of significant public outcry following several studies over the last few years that have linked the pollution with significant health impacts. One of those studies was written by University of Chicago economist, Michael Greenstone, the director of the Energy Policy Institute at Chicago. According to Greenstone’s research, people living North of the Huai River, where the government subsidizes coal use for home heating, live 5 years fewer than people to the South. “The price of energy should reflect the damage it causes in terms of health and climate,” Greenstone said.

But how can China, and other rapidly-developing countries, achieve this goal? Zou Ji, one of China’s leading climate experts and the deputy director general of the National Center for Climate Change Strategy and International Cooperation, said that China is working on many fronts, from developing new technologies to pushing for low-carbon urbanization, as some 300 million rural residents will move to the cities in the next few decades. But in the meantime, Zou said, China can’t shut down its coal-fired power plants, which for now are crucial for economic growth. He added that “China has the most advanced coal-fired technology,” with emissions, he said, comparable to that of natural gas. “We need to design the right strategy,” he said. “A change of value judgment will help China.” In other words, China somehow has to drive toward less individual energy consumption, not more.

The morning session closed out with a wide-ranging conversation about China between Greenstone and Hank Paulson, chairman of the Paulson Institute and former Secretary of the US Treasury, who noted that the Paulson Institute is working on sustainable urbanization and climate change and air quality projects on the ground in China. “I believe that the US-China relationship is the most important in the world,” said Paulson. “We have plenty of differences, but a lot of shared interests, such as climate, and it’s harder to make progress on the areas where we have shared interests if we are not cooperating with each other.” Paulson called the recent US-China climate agreement “remarkable,” adding that “the biggest environmental and economic risk facing the world is climate change. The leaders in China are very committed to this.”

In the afternoon, the forum continued the themes introduced by Paulson, taking a look at the broader relationship between China and the US. It featured a conversation moderated by Steve Edwards, the executive director of the University’s Institute of Politics, with Madame Fu Ying. During that conversation, Fu echoed Paulson’s sentiments and reiterated her hope that other countries would follow the good example China and the US have set in confronting climate change.

Morning Session - The Energy, Environment, and Climate Nexus in China: Where Opportunities Converge

When international negotiators meet in Paris later this year for the next round of UN climate talks, much of the world’s focus will be on two countries: China and the U.S. Both countries have shown their leadership in confronting climate change, with a landmark joint climate announcement last year outlining their respective new climate goals for 2025 and beyond. But much work remains to be done to make these goals a reality. This panel and associated discussion with current and former senior government officials and academics will explore the intertwined environmental and climate challenges the country faces, their health and economic toll, and the key energy and environmental policy decisions that China has made and will need to make in order to forge a sustainable path forward.

Beyond Paris: A Conversation with Hank Paulson, Chairman Institute and Former U.S. Secretary of the Treasury

Climate change is not the only challenge the U.S. and China must work together to confront. Their relationship, and how it evolves, is crucial to all of our futures. As the two countries continue to learn how to interact in an ever changing world, there will be cooperative opportunities and times of contention. In what areas do the U.S. and China have the greatest common interests? And how can they work past areas of debate to forge a relationship that will aid both countries’ interests and our common future?

The U.S.-China Forum is sponsored by the China-U.S. Exchange Foundation, in collaboration with the University of Chicago Office of Global Engagement. The annual Forum brings together renowned experts—including faculty from the University of Chicago and scholars from China—for high-level engagements focused on issues of importance to both countries and, by extension, the world. It is intended to spur long-term research collaborations between Chinese and University of Chicago researchers. This year’s program is focused on the climate change challenge, and hosted by the Energy Policy Institute at the University of Chicago (EPIC) and the Paulson Institute. Contact: Office of University Events and Ceremonies 773.702.9626
Areas of Focus: Climate Change
Definition
Climate Change
Climate change is an urgent global challenge. EPIC research is helping to assess its impacts, quantify its costs, and identify an efficient set of policies to reduce emissions and adapt...
More on this Areas of Focus / Research Theme
, Climate Law & Policy
Definition
Climate Law & Policy
As countries around the world implement policies to confront climate change, EPIC research is calculating which policies will have the most impact for the least cost.
More on this Areas of Focus / Research Topic
, Environment
Definition
Environment
Producing and using energy damages people’s health and the environment. EPIC research is quantifying the social costs of energy choices and uncovering policies that help protect health while facilitating growth.
More on this Areas of Focus / Research Theme
, Air Pollution
Definition
Air Pollution
Air pollution from fossil fuel combustion poses a grave threat to human health worldwide. EPIC research is using real-world data to calculate the effects of air pollution on human health...
More on this Areas of Focus / Research Topic
, EPIC-China
Definition
EPIC-China
China is indisputably critical to addressing the global energy challenge. China is one of the world’s biggest economies, its top carbon emitter, and among its most polluted countries. Yet, China...
More on this Areas of Focus / Affiliated Center
Related...

Cynthia Giles (EPA): Next Generation Compliance and Enforcement at the U.S. EPA.

Water: Chicago in the 21st Century and Beyond